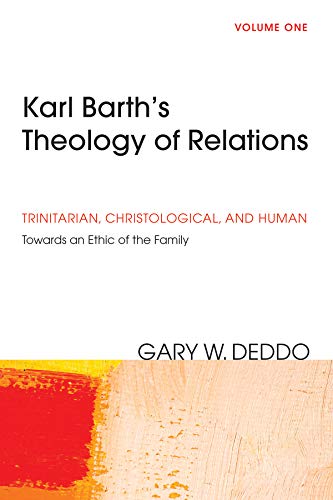 Karl Barth’s Theology of Relations: Trinitarian, Christological and Human: Towards an Ethic of the Family. Issues in Systematic Theology, Volume 4.

Dr. Gary Deddo has done theological students and educators a great service by producing this book. It is a meticulous and well-organised study, evident primarily in Deddo’s willingness to summarise his work as he goes along and to note important patterns and parallels in Barth’s thought. As a result, the entire book is seamlessly woven together and comprises an organic whole. I will be turning to it frequently both as a research student whose interests are in Trinitarian theology and as a parent!

Deddo’s theological perspective is congruent with Barth’s and he offers no substantial critique of Barth’s thought; only minor recommendations for clarification and expansion.

The book itself is composed of four parts: Part One deals with the manner in which Barth theologically grounded his anthropology and ethics. Here we are introduced to his Trinitarian and Christological thought. Part Two, entitled ‘Humanity as Co-Humanity: Being in Covenantal Relations One With Another’ deals specifically with the contours of Barth’s theological anthropology. Parts One and Two comprise an excellent commentary on Barth’s Trinitarian, Christological and anthropological thought and are worth the price of the book alone. Part Three deals with Barth’s thought in relation to issues arising from the parent-child relationship, specifically the theological and ethical implications of procreation and child rearing. Part Four is devoted to Deddo’s own constructive proposals through critical engagement with other theological and non-theological approaches and by addressing issues of contemporary relevance to the North-American context.

As a participant in the North American context myself I found Deddo’s critique of James Dobson, an extremely influential Christian psychologist and spokesperson for the American family, particularly interesting. Using Barth’s theological framework as a critical grid he examines Dobson’s views on the purpose and goal of parenting, the nature of the child and parental authority, and the purpose and dynamics of discipline.

Dobson, representing the ‘pragmatic/moralist’ approach to the family, does not fare well. After reviewing Dobson’s presuppositions regarding the quality and mode of the parent-child relationship Deddo concludes that ‘for Dobson the parent-child relationship is in large part a variety of operant conditioning effected by the parent on behalf of the child’ (296). That this mechanism can produce pragmatic results is due to the fact that it is based upon the dynamics of creaturely reality and is therefore applicable not only to humans but also to dogs and frogs. But we are not merely creatures, we are also persons created in the image of God, and as such this technique is by definition unable to foster the personal responsibility and maturity that are meant to characterise genuinely human relationships. Deddo concludes therefore that ‘there is no specifically Christian content to Dobson’s suggestions’ due to the fact that ‘such procedures call for no human encounter, no covenant fellowship, neither seeing eye to eye, hearing and speaking, nor giving and receiving in gratitude, responsibility and freedom’ (297). Dobson’s proposals ultimately falter on the fact that they work from a rationality that is neither Trinitarian nor Christological and subsequently run counter to a logic that is genuinely human.

Deddo’s reflections on the theological and ethical implications of procreation and adoption are excellent, as are his comments on the identity of the child as a child of God and the significance of gender in the parent-child relationship. It can only be hoped that this book will be required reading for a future generation of ministers, theologians, and family therapists and that its insights will be integrated into many works oriented toward a more general readership. This is really where the fruit of Deddo’s work is most needed.