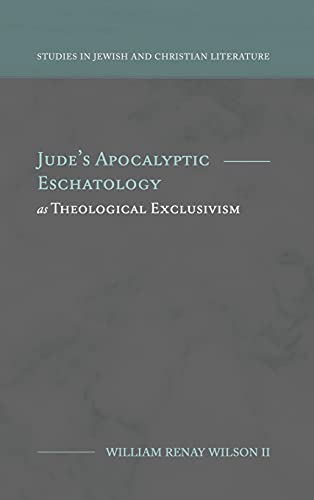 Wilson leaves no stone unturned in his survey of research on Jude in chapter one. Wilson first addresses text-critical issues in Jude. He seems to endorse Joel Allen’s 1998 position on Jude 22–23a, that these verses are three clauses that “do not indicate distinct groups of persons, but amplif[y] the same group, i.e., those who doubt” (p. 7). In Jude 4, Wilson argues that “Master” (δεσπότης) refers to “God,” and he considers “Lord” (κύριος) to be the original reading of Jude 5, not “Jesus” (p. 8). Wilson next considers Jude’s use of earlier Jewish and Christian traditions. He argues that Jude interacts with the Old Testament in its original Hebrew and that Jude uses 1 Enoch and the Assumption of Moses as “material revered by his audience, or perhaps his opponents” (p. 11). Regarding Jude’s often-discussed literary relationship with 2 Peter, Wilson contends that the two letters are independent applications of an earlier “shared preaching campaign developed jointly by the earliest church leaders designed to combat widespread antinomian tendencies” (p. 14). Wilson affirms that Jude the brother of James and Jesus wrote this letter, and he argues that it is a product of the AD 50s and most likely addressed to an at least partially Jewish Christian congregation “somewhere between Jerusalem and Asia Minor” (p. 24). He identifies the opponents condemned in Jude as “itinerant antinomian syncretists” (p. 27).

The second chapter is significant for its definition of apocalyptic eschatology and Wilson’s investigation of its presence in other Jewish and Christian literature, which would have been formative for Jude. Piecing together elements identified by other scholars, Wilson defines apocalyptic eschatology as the “loosely defined worldview” that is “common to apocalypses” and that “includes such themes as dualism, God’s sovereignty, pessimism, paraenesis, judgment, the intervention of a redeemer/judge, the fate of humanity, and an imminent end” (p. 33). Wilson then demonstrates how apocalyptic eschatology applies these themes to combat “invasive and omnipresent theological pluralism” (p. 36). Apocalyptic Old Testament prophets like Isaiah, Jeremiah, and Zechariah decried how God’s people Israel in various generations participated in pagan, polytheistic idolatry. During the Second Temple period, 1 Maccabees and the documents of Qumran alike promoted purified monotheism over against Greco-Roman polytheistic encroachments. Paul confronted idolatry in both Athens (Acts 17) and Corinth (1 Corinthians).

In chapter 3, Wilson describes how Jude features the elements of apocalyptic eschatology outlined in the previous chapter. Jude affirms Christian dualism by attributing “a unified omnipotence presiding over the universe with eternal power and authority” to both God the Father and Jesus Christ (p. 70). He also distinguishes between righteous and wicked people throughout his letter. Jude is deterministic in that he refers to God calling (v. 1), keeping (vv. 1, 13), and preserving (v. 24) Christians. Jude’s three prophecies concerning how the ungodly will face eternal judgment (vv. 4, 14–15, 18) evince his pessimism and his use of the apocalyptic judgment motif. Like other apocalyptic authors, Jude affirms divine sovereignty “while simultaneously exhorting [his audience] to live obediently” to God (p. 86). The Lord Jesus is either each person’s redeemer or judge; as he was at the exodus (v. 5), so he will be when he returns (vv. 14–15).

In the final chapter, Wilson applies Jude’s apocalyptic eschatology and its concomitant theological exclusivism to twenty-first century postmodernism. He demonstrates that the sexual promiscuity promoted by pagan polytheism is functionally the same as that of postmodern moral relativism. Wilson concludes, “In the first century, Jude responded to the challenge with an apocalyptic eschatology that can only be described as theologically exclusive. If affirmed and obeyed, his doctrinal stances push the church toward a stricter theological conservatism, a more closed and guarded worldview that expressly contradicts the spirit of the age” (p. 108).

Though this book’s primary argument is sound, Jude’s Apocalyptic Eschatology is not without its flaws. In particular, it does not interact extensively with literature on Jude written after 2002, when Wilson first defended this dissertation. Wilson has updated his survey of research on Jude to include the major evangelical commentaries on Jude published since 2002: those of Thomas R. Schreiner (NAC, [Nashville: Broadman & Holman, 2003]), Gene L. Green (BECNT [Grand Rapids: Baker, 2008]), and Herbert Bateman IV (EEC [Bellingham, WA: Lexham, 2015]). However, Wilson interacts with each of these commentaries less than a handful of times throughout this monograph. Wilson identifies the opponents in Jude as “itinerant antinomian syncretists” (p. 27). He thus disagrees with Bateman, who identifies the opponents as “Zealot or Siccari revolutionaries agitating for war with Rome in the A.D. 60s,” but he calls Bateman’s argument “lengthy and well-documented” (p. 26 n. 167). Refuting Bateman’s new argument concerning the opponents would have made Wilson’s more traditional identification of the opponents more compelling.

Despite this shortcoming, this monograph is excellent in both its scholarly and devotional quality. New Testament scholars will find in the first three chapters a concise and thorough survey of research on Jude, a clear definition and discussion of apocalyptic literature, and an analysis of Jude as an apocalyptic document. In the third and fourth chapters, pastors will find an exposition of Jude that makes its sometimes-confusing uses of the Old Testament and Second Temple Jewish writings understandable and applicable to the theological and ethical dilemmas that continue to beset Christians today. I certainly found this book a welcome companion as I preached Jude.