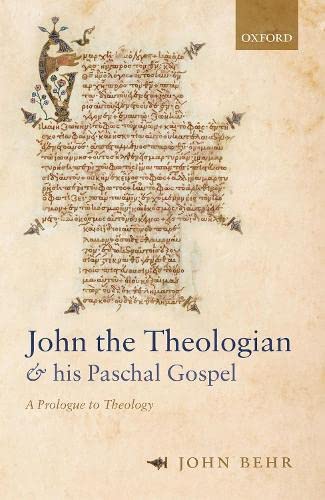 John the Theologian and his Paschal Gospel: A Prologue to Theology

John Behr’s latest book, John the Theologian and his Paschal Gospel: A Prologue to Theology, is a bold and bracing—and at times perplexing—effort to read John’s Gospel from start to finish as an apocalyptic account how Christ’s death and resurrection manifest him as the Word-made-flesh. Behr, Dean and Professor of Patristics at St Vladimir’s Orthodox Theological Seminary, structures his work as a “symposium” in which three groups of readers are invited to a dialogue on John: (1) early church Fathers, especially from the second and third centuries; (2) modern scriptural scholars; (3) and the late French phenomenologist Michel Henry. The book’s three main parts, accordingly, approach John in first a historical, then an exegetical, then a phenomenological manner, though theological concerns reverberate throughout. Given its conceptual breadth, and the rigor with which Behr engages both John and the readers over whose shoulders he looks, this is an extraordinarily difficult book either to summarize or to evaluate in brief. Instead of attempting anything like a comprehensive engagement, in this review I will first share a few of the book’s many striking exegetical insights, and then offer a few questions and critiques regarding some of the book’s major claims.

As to exegetical highlights, first, Behr compares the riddling, deliberately elusive character of John’s Gospel with the explicit act of unveiling that occurs in Revelation, which he holds was written by the same author, and asks the provocative question:

If we take the Apocalypse at its word, however, could it be that the Gospel of John in fact is the work which “veils” that which is unveiled in the Apocalypse, the Gospel veiling the ultimate victory of God in Christ in the form of a narrative of Jesus and his apparent defeat, to all worldly perception, even if that “veiling” is done in a particular manner, distinct from the Synoptics, by sharing elements found in the “apocalyptic” literature? (p. 111)

Further, regarding one element of the relationship between John and the Synoptics, in the midst of an illuminating discussion of John 1:50–51, Behr observes, “What is affirmed at the final stages of the Synoptics, in the last Son of Man saying, when Christ says ‘hereafter [ἀπʼ ἄρτι] you will see the Son of Man seated at the right hand of Power’, is here promised at the beginning of John’s Gospel” (p. 141). As so often in John, what is glimpsed in the Synoptics is gazed at full on. Behr also skillfully traces through John’s Gospel the theme of Christ’s body, and ultimately his people, as the true temple. For instance, Behr argues, to my mind convincingly, that Ezekiel 47:1 and 47:9 are crucial background for Jesus’s saying in John 7:37–38 (pp. 162, 165). Accordingly, the “his” in “Out of his heart will flow rivers of living water” refers not to Jesus, but to the individual believer, who, through the gift of the Spirit, is constituted as God’s end-time dwelling (p. 166; cf. 1 Cor 6:19). Further, following Peter Leithart, Behr offers a fascinating, suggestive synopsis of John’s Gospel as a tour of the “new tabernacle” that Jesus is (p. 192). Many other exegetical gems could be displayed from the book’s middle section, which, in my opinion, is the book’s strongest.

My critical comments will be necessarily selective, and will proceed topically in the book’s own order: historical, exegetical, phenomenological. First, Behr repeats the common scholarly assertion that it is only in John’s Gospel that Jesus is portrayed as being crucified on the day when the Passover lambs were slain (p. 92). This observation bears much of the weight of Behr’s claim that John was the origin of an early Christian practice of observing the Passover feast (pp. 77–92). It is therefore disappointing that Behr does not engage with the extensive recent argument of Brant Pitre, in Jesus and the Last Supper (Grand Rapids: Eerdmans, 2015), in support of seeing both John and the Synoptics as placing Jesus’s crucifixion on 15 Nisan.

Second, exegetically speaking, one of Behr’s central, most frequently reiterated claims is that John 1:14 does not assert that the “pre-incarnate Word” became a human. Instead, the central argument of Behr’s book is “that Incarnation should be understood not as a past event, but as the ongoing embodiment of God in those who follow Christ” (pp. vii–viii). This is a subtle, many-sided claim that I cannot fully unpack here. Behr is especially concerned to avoid, in Rowan Williams’s phrase, treating the incarnation as “an episode in the biography of the Word,” as he frequently reiterates. I am convinced that Behr has put his finger on an important problem, but I am not convinced of his solution. To elaborate his point, Behr appeals to Herbert McCabe’s essay “The Involvement of God,” in which McCabe writes, “The historical mission of Jesus is nothing other than the eternal mission of the Son from the Father; the historical outpouring of the Spirit in virtue of the passion, death and ascension of Jesus is nothing but the eternal outpouring of the Spirit from the Father through the Son” (cited on p. 21). The fundamental problem with McCabe’s language, and Behr’s appeal to it, is that “mission” only applies in time, since it implies a sending to. To borrow a phrase from Gilles Emery (“Theologia and Dispensatio: The Centrality of the Divine Missions in St. Thomas’s Trinitarian Theology,” The Thomist 74 [2010]: 527), it is true that the temporal mission bears within itself the eternal procession of the person sent. But McCabe’s language occludes the crucial fact that the temporal missions extend the eternal processions. Missions are processions plus: processions plus a new mode of being present to the creature. Further, simply on exegetical grounds, I think Behr’s attempt to forswear all talk of the preexistent Word runs afoul of John the Baptist’s own words: “This was he of whom I said, ‘He who comes after me ranks before me, because he was before me.’” (John 1:15). In terms of his human, temporal existence, Jesus did not exist before John. John’s “he” is the Word-made-flesh; the “before” can only be before Christ’s incarnation. If Behr were to respond, as he does in a related context, that this is not “said of the Word” (p. 246), such a response, however unintentionally, would seem to divide Christ into two ascriptive subjects. Yet John’s Prologue and John the Baptist’s testimony, as Behr no doubt affirms, are speaking of the same οὗτος, the same “he” (John 1:2, 15).

Finally, on the phenomenological front, I must frankly confess that I am not at all sure I understand Henry’s major claims. So the critique I offer here is submitted in full awareness that it may owe simply to my ignorance and limits. That said, I wonder whether much of Henry’s phenomenological reading of “flesh” in John depends on an exegetically questionable refusal to take “flesh” in 1:14 as a metonymy (see, e.g., p. 321). That is: Henry bases much of his reading of John on the word choice of “flesh” as opposed to “a human being,” whereas, as most interpreters recognize, it makes best sense to see John as using the former to mean the latter.

While I do not fully agree with some of its central claims—indeed, in Behr’s own words, its “central argument”—I nevertheless profited greatly from wrestling with this penetrating, creative, disciplinary boundary-bursting work. Students of John’s Gospel, the early church, and Christian theology as a whole will, I trust, likewise benefit from grappling with Behr’s take on John the apocalyptic theologian of the mystery of Christ’s Passover sacrifice.