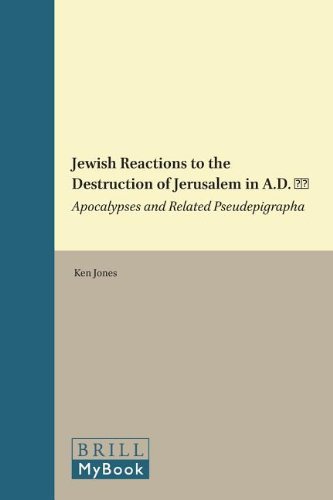 Jewish Reactions to the Destruction of Jerusalem in A.D. 70: Apocalypses and Related Pseudepigrapha

In an expanded version of his doctoral dissertation, Kenneth R. Jones, who is Assistant Professor of History and Classics at Baylor University, provides a study on the variety of Jewish reactions to the destruction of Jerusalem. Jones aims to look at the relevant texts as sources of Roman history, written as provincial literature from the vantage point of the colonized.

Each chapter of the book looks at a different pseudepigraphal Jewish text. A summary and brief discussion on the dating and composition history of the text is offered before the perspective on Rome’s prominence is analyzed. This is done while contrasting these perspectives with Josephus, whose retelling of history suggests that the rise of the Roman Empire was a sign of God’s favor and thus Jews ought to be obedient to Rome, even after the destruction of Jerusalem in 70 AD.

Jones begins with 4 Ezra (ch. 2), suggesting that it was written to combat a particular perspective—that Rome’s ascendancy as a world power was divinely sanctioned—in light of the sinfulness of the Empire. In 2 Baruch (ch. 3), Jones notes that the future judgment that will come upon the nations is not the result of their mistreatment of the Jews, but rather from contravening God’s laws (p. 96). 3 Baruch (ch. 4) addresses the question of God’s presence in light of the aftermath of the destruction of Jerusalem and answers with an affirmation of God’s providential care of creation. The message of 4 Baruch (ch. 5) is one of separation: the Jews are ‘to avoid Rome and all things Roman’ (p. 154). Sibylline Oracle 4 (ch. 6) looks beyond the political realm to God’s future salvation and vengeance. Sibylline Oracle 5 (ch. 7) focuses on Rome’s inferiority in relation to God. Finally, in the Apocalypse of Abraham (ch. 8) attention is given primarily to idolatry, which in this milieu would relate to the imperial cult, and the implications this has for Jewish identity.

As Jones rightly demonstrates, these texts have political contours designed to speak into the present situation. Since most of the texts analyzed in this volume are designated as ‘apocalyptic,’ this raises the question regarding the social function of that literature. Did the genre emerge as a vehicle to express hope in the midst of the cognitive dissonance that unmet expectations create? Regardless of the specifics of the conveyed message (Jones demonstrates that the authors of these texts shared different perspectives), it certainly appears that the genre communicates to some sort of crisis (as analysis of these and other apocalyptic texts demonstrate). Unfortunately, Jones does not address implications for the genre of apocalyptic but confines his study to the selected texts. Recently, however, Anathea E. Portier-Young has argued convincingly in her book Apocalypse Against Empire that the earliest examples of ‘apocalyptic’ literature—Daniel, the Apocalypse of Weeks (1 Enoch 93.1–10 + 91.11–17), and the Book of Dreams (1 Enoch 83–90)—contain theologies of resistance to the domination and hegemony of empire (in this case the actions of Antiochus IV Epiphanes are in the forefront). Intriguingly though, Jones explicitly denies that resistance forms part of the function of the later apocalyptic texts that he is addressing (p. 278). However, resistance is inevitable, though this need not be seditious or require a violent response. Through the medium of ‘apocalyptic’ the imagination is conditioned to resist the empire’s broad-sweeping claims about itself, its subjects, and the nature of reality. I see the evidence that Jones offers as a complement to Portier-Young’s study and thus find it odd that Jones concluded that these texts were not in some sense ‘resisting’ Rome.

As one final critique of omission, I think it would have been helpful to include a chapter on Revelation in this volume. Given that early Christianity was a Jewish movement and Revelation was an apocalyptic text critiquing Rome in most likely a post-70 A.D. time period, it would have fallen within the scope of the present volume. Additionally, the texts analyzed in this volume were preserved among Christian communities, so bifurcating Revelation from these texts seems problematic. Revelation could have been analyzed with the appropriate caveats regarding the Christian theology of the text, providing intriguing points of contrast. If it was countered that Christianity represents a sectarian movement and thus would not be representative of mainstream Judaism, this opens the question of whether or not apocalyptic texts were written for conventicle groups on the periphery of Judaism. How mainstream was apocalypticism in the first and second century? Perhaps the perspectives of these texts represent various sectarian movements. Due to the uncertainty surrounding these questions, it seems appropriate to include Revelation as another ‘Jewish reaction’ to Rome’s destruction of Jerusalem.

Overall, Jones’ volume is a fine study worth commending; his analysis of the relevant texts is compelling and worth considering. It is a beneficial read both for its analysis of the various Jewish reactions to the destruction of Jerusalem and for correlating these texts within Roman history.