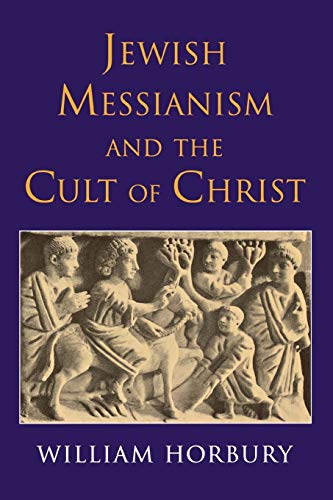 Jewish Messianism and the Cult of Christ

This is a tremendously important book. Three things in particular make it so: one, the topic itself is supremely important for any notion of New Testament theology; two, the author is eminently well placed to publish a monograph on this subject and three, he brings together an enormous amount of relevant primary literature and adds tremendous scholarly insight. The book is the result of Horbury’s long preoccupation with messianism in Second-Temple Judaism. It is true that some of the ideas presented here have been published before, but the beauty of this book is precisely that the wisdom contained in it matured over time and by continuous exposure to the perceptive criticisms of other eminent experts. This is not the sort of book that throws caution into the wind for the sake of flying a high kite (excuse the mixing of metaphors!).

The topic is tackled under four headings: one, Messianism and the old Testament; two, The Prevalence of Messianism in the Second-Temple Period; three. The Coherence of Messianism; and four, Messianic Origins of the Cult of Christ. All this is prefaced by an Introduction that sets the tone: it was particularly messianism which formed the link between Judaism and the gentile acclamation of Jesus as Lord. A main plank in Horbury’s strategy is to show the line of continuity in paying homage to the messiah which connects the Septuagint, the Targums and the rabbinic writings. Yes, by the time of early Christianity there were Greco-Roman parallels to messianism in the shape, for instance, of the ruler cults. And yes, Jewish messianic thinking had been influenced by the Greco-Roman world. But such Jewish thinking—which finally accounts for the attribution of the relevant Christological titles to Jesus—has a long Jewish ancestry, in fact, a pre-exilic one. If Horbury is right we have here a strong foundation on which to explain the growth of the ‘Christ cult’.

Chapter one examines the terminology and origins of Jewish messianism and suggests that such messianic thinking even influenced the formation of the Jewish canon. It concludes with a brief discussion of Jewish messianic prototypes such as Moses and David. Chapter two is essentially a reply to the suggestion that messianism was dormant throughout much of Second-Temple Judaism. Quite the opposite: it was prevalent. Specialists in both Testaments have consistently underrated the significance of messianism during this period. This can be demonstrated even without recourse to the Qumran documents. Of course, Horbury also discusses Qumran, but not until having established the core of his thesis on the basis of older traditions and texts. Chapter three acknowledges the variety in messianic conceptions which one encounters in the texts. Yet Horbury concludes that the often-cited ‘exception’—namely the expectation of a divine transcendent messianic figure—was anything but the exception. Chapter four revisits the messianic origins of the Christian movement by focusing on angel-christologies and praise of Jewish rulers in relation to the worship of Christ. Horbury concludes that the principal New Testament titles for Jesus demonstrate the strong impact of Jewish messianism on the Christian movement and that this impact can also be shown with reference to Jewish angel terminology.

I suspect the most Themelios readers will welcome Horbury’s argument. Not many books are ‘musts’—but this one certainly is. It may not be revolutionary, but the thesis defended by it is historic. If I had to add a note of criticism it would be that, given the publication date, one would have expected Horbury to make reference to some important books on the origins of christology published in the mid-90s. Instead he seems to have concentrated more on the slightly older secondary literature. Having said this, his handling of the primary material is impressive. And that, I suspect, is what counts in the final analysis.