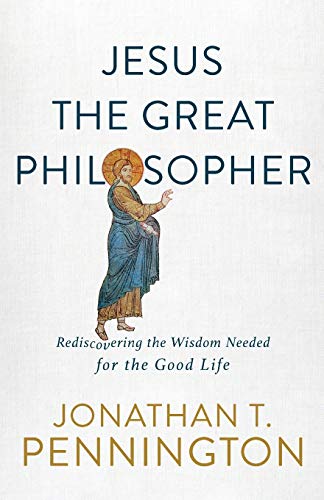 Jesus the Great Philosopher: Rediscovering the Wisdom Needed for the Good Life

People tend to view philosophy today as an esoteric discipline, engaged in “meaningless speculations about whether chairs exist when we leave the room” (p. 18). This popular perception is reinforced by the common stereotype of philosophers as quirky intellectuals who give little attention to the practical issues of daily life. In his book, Jesus the Great Philosopher, Jonathan Pennington attempts to recover the purpose of ancient philosophy, arguing that the Greek philosophers trained people to live wisely and pursue goodness. With the goal of philosophy thus understood, Pennington declares that the Bible can be read fruitfully as a work of ancient philosophy, since it has a similar aim. Indeed, the early church viewed and depicted Jesus himself as a great philosopher and our modern loss of this perspective on Jesus has had dire consequences. Those familiar with Pennington’s work will recognize that this book is a popularization and extension of many of the themes presented in his commentary, The Sermon on the Mount and Human Flourishing (Grand Rapids: Baker, 2017).

The book consists of ten brief chapters. The first chapter introduces Pennington’s thesis that Jesus should be viewed as the greatest philosopher and Christianity as a “whole-life philosophy.” If these insights become obscured, Christian faith becomes disconnected from “real life” and Christians begin to seek wisdom from alternative gurus, stop searching the Bible for answers to life’s biggest questions, and consequently limit their witness to the world. The second chapter describes how ancient philosophers sought to model and inculcate wisdom for the art of living well, for the cultivation of flourishing societies. Yet the rise of the modern “scientific” university, among other factors, has contributed to the present-day divorce between philosophy and practiced virtue (p. 31). Pennington’s introduction to ancient philosophy and his explanation of how it has changed is creative, easy-to-follow, and interesting.

The next chapter pairing explores the philosophical “big ideas” of the Bible, first in the Old Testament (ch. 3) and then in the New (ch. 4), through the grid of metaphysics, epistemology, ethics, and politics. Pennington’s claim that “the Hebrew Scriptures present themselves as a work of divinely revealed ancient philosophy” (p. 39) seems anachronistic, although of course the Old Testament does answer the ultimate questions of life. (One might ask whether any important work of ancient Near Eastern literature, such as the Epic of Gilgamesh, would count as ancient philosophy.) In turning to the New Testament, Pennington is on firmer ground when drawing parallels between Jesus’s teaching style and that of the Greek philosophers. The title of this book is potentially misleading, though, since the focus is not exclusively on Jesus. Pennington ranges throughout the Old and New Testaments to prove that the entire Bible, like Greco-Roman philosophy, is concerned to bring people “into the fullness of humanity and maturity” (p. 79).

The final six chapters discuss three topics that one may not typically associate with philosophy, or perhaps even the Bible: the emotions (chs. 5–6); relationships, especially friendship (chs. 7–8); and happiness or human flourishing (chs. 9–10). Pennington’s pattern is to set up the ancient philosophical dialogue about each topic, with a few modern voices, before showing how Christianity speaks into the debate. Pennington weaves a fascinating array of conversion partners into his analysis. He asserts that the Bible and Christianity “have a remarkably sophisticated philosophy of emotions” (p. 101), a vision for restored relationships that is “not naive or idealistic” (p. 181), and a hope-filled philosophy of true human flourishing. In each case Christianity offers distinct contributions to these important topics.

Jesus the Great Philosopher is a popular-level book, not specifically written for an academic audience, so Pennington does not burrow too deeply into any of the areas he surveys. Nevertheless, the book could have compared more thoroughly how Greco-Roman philosophy and Christianity think about creation, wrongdoing, and justice. While Pennington persuasively demonstrates how Christianity overlaps with yet remains distinct from ancient philosophy, one wonders if these conceptual frameworks were incongruous at any points. In other words, does the conception of Jesus as philosopher constrain our sense of his mission as much as it clarifies? Does the New Testament traffic in or transcend philosophical categories?

The book contains several images and diagrams, some more helpful than others. There are relatively few endnotes, but it is obvious throughout that Pennington is tapping into a wealth of previous research. The book is chock-full of references to popular culture, works of great literature, and contemporary figures (from Jordan Peterson to John Piper). This will make the book an engaging read for many American evangelicals but may limit its impact on more distant readers. Overall, the book is an intriguing mix: sometimes it feels as if Pennington is sitting on a couch, offering cultural critique, sometimes as if he is at the podium lecturing on Greek terms, and sometimes as if he is exhorting fellow believers from the pulpit. This reviewer gained many insights into ancient philosophy and the Bible’s interface with it and, for that reason, would highly recommend this book. Hopefully scholars will not overlook it and ordinary Christians will somehow find it, because Jesus the Great Philosopher deserves a wide audience.