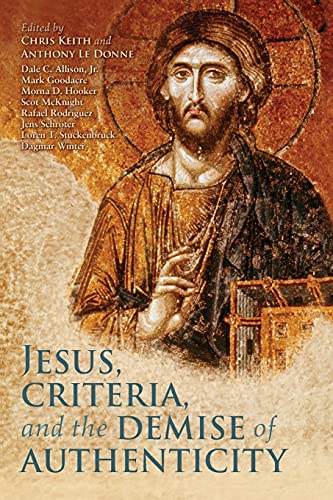 Jesus, Criteria, and the Demise of Authenticity

Anyone who has spent any amount of time in historical Jesus studies has encountered the traditional “criteria of authenticity.” For years these criterion have been passed down and employed as the only tools that allow us to say anything about the Jesus of history with certainty. If one is going to do “serious scholarship” regarding the historical Jesus, it has often been assumed that the criteria of authenticity provide the foundation for a reconstruction of the life of Jesus.

In Jesus, Criteria, and the Demise of Authenticity, Chris Keith and Anthony Le Donne have assembled a group of NT scholars who question the validity of the traditional criteria of authenticity to varying degrees. Contributors to this volume include Morna Hooker, Jens Schröter, Loren Stuckenbruck, Dagmar Winter, Rafael Rodríguez, Mark Goodacre, Scot McKnight, and Dale Allison. Many of these authors cite Morna Hooker's observations on this topic to be foundational for their thinking.

In the foreword, Hooker reemphasizes her previous concerns with the criteria and connects the use of the criteria of authenticity with the scholarly desire for a purely scientific method to study the historical Jesus. However, Hooker shows how use of the criteria led to competing and sometimes contradictory “sure footed” conclusions. She hints at a way forward in Jesus research by arguing for a sustained look at the repeated and emphasized themes in the life of Jesus as opposed to study of the fragmentary details of the gospels.

Part one of this work focuses on the methodological foundations for the criteria of authenticity. Keith shows that the use of the criteria of authenticity was simply an outgrowth of the methodological foundations of form criticism. Both those who use the criteria and form critics assert that the scholar's task is to separate the authentic traditions found in the Gospels from the unauthentic layers of tradition added by the Gospel authors and the early church. Keith discusses the impossibility of ever separating the “interpreted” from the “authentic” elements of the Gospels. Since the criteria cannot provide their intended results, they should be abandoned. Schröter also deals with what he views as the faulty presuppositions of the criteria approach based on historiographical method.

Part two assesses specific criterion of authenticity. Stuckenbruck discusses the “methodological difficulties” in trying to discover the original Aramaic sayings of Jesus behind our Greek text. He questions this linear understanding of transmission and translation by highlighting how the Gospels present Jesus in multilingual contexts. Stuckenbruck also discusses how the Greek of the NT could appear Semitic due to the influence of LXX patterns, not necessarily because there was an Aramaic original.

Le Donne takes aim at the criterion of coherence. This criterion argues that material about Jesus can be judged to be reliable if it coheres with a specific set of sound foundational facts. However, Le Donne shows there are very few sound foundational facts about the life of Jesus according to the various criteria. On top of this, the criterion of coherence assumes that Jesus could have never deviated from the core of his teaching.

Winter addresses the criterion of dissimilarity. He again stresses the faulty methodology of the criterion for focusing on isolated units of the gospels as opposed to assessing the whole. Winter argues that the current pictures of Second Temple Judaism and early Christianity available are simply too incomplete to use this criterion. Winter's final critique of this criterion highlights that the unique elements of Jesus' ministry need not be defining for the historical Jesus.

In the final chapter of section two, Goodacre deals with the criterion of multiple attestation. He notes that a number of scholars employ this criterion with the assumption that Q and Thomas are independent witnesses. Goodacre shows why these two documents in particular are suspect as “independent witnesses.” He also makes the point that simply because an event is recorded once, that does not make it untrue. This simple fact should give the interpreter pause in employing this criterion.

Finally Allison offers some way forward in regard to future work on the historical Jesus. Rather than focusing on individual units and what is distinctive in the life of Jesus, Allison encourages interpreters to turn their focus toward the larger narrative. Within these narratives, it is in the material that is repeated in which the interpreter will find the most assured historical facts.

This volume raises serious questions about the ability of the criteria of authenticity to deliver what it promises. The authors in this work have taken a considerable step toward realizing Hooker's initial goal of putting the criteria of authenticity behind us. These criteria simply cannot give us the historically authentic elements of the Gospels, and this book is a clear call for Jesus scholars to find a better way forward in building a foundation of historical facts about Jesus on which to stand.

A number of readers may disagree with individual authors regarding their views on various ancillary issues throughout the volume. However, when it comes to the work's main objective, one is left to consider if some of the authors have gone too far in completely dismissing the criteria of authenticity. Again, the authors disagree on the degree to which the criteria can be helpful in offering anything beneficial to Jesus research, but overall they take a skeptical attitude toward them. Is it fair to argue that the criteria are of little to no value? Some might argue that within the right context some of the traditional criterion can still be useful. For example, careful use of the criterion of multiple attestation is still a worthwhile historical tool for investigating events in the past. Le Donne actually goes on to defend the criterion of multiple attestation arguing that it does not stem from a foundation of form criticism, but is simply a method of good historical investigation.

Anyone invested in historical Jesus research must come to terms with the arguments put forth in this book. The authors have raised serious questions regarding the way historical Jesus research has been done, and they show that the commonly accepted tools have largely failed to deliver what they promised. This book is an important starting point for progressing in what some feel is a stalled discipline.