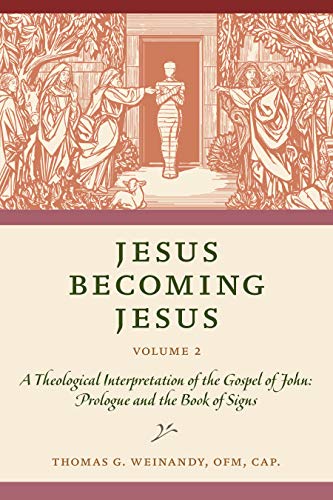 Jesus Becoming Jesus: Volume 2: A Theological Interpretation of the Gospel of John: Prologue and the Book of Signs

Weinandy is a Roman Catholic priest and theologian who has written a number of books. With this volume, we have the second installment of his three-part series, Jesus Becoming Jesus. The first volume (Jesus Becoming Jesus: A Theological Reading of the Synoptic Gospels [Washington, DC: The Catholic University of America Press, 2018]) provided a theological reading of the Synoptic Gospels. This second installment provides a theological interpretation of the first thirteen chapters of the Gospel of John.

Weinandy explains that he aims “to discern the theological and doctrinal content of John’s Gospel” and, as such, he chooses not to treat such topics as “textual and form criticism” nor to employ the “historical critical method.” In terms of the theological starting point for his interpretation, he makes clear that he is attempting to “apply the teaching of Second Vatican Council,” that is, that Scripture must be interpreted in light of “the living apostolic tradition,” “later magisterial conciliar teaching” and “the subsequent theological tradition” (p. x). In a word, Weinandy’s offering is a thoroughly Roman Catholic theological interpretation of John 1–13.

The book is divided into two parts. Part 1 consists of two chapters and covers in some depth John 1. Part 2 consists of twelve chapters, which cover John 2–13. The conclusion briefly summarizes some of the main highlights in the body of the work.

A number of insights or, at the very least, statements that give food for thought emerge from Weinandy’s reading of John 1–13. Commenting on the first half of John 1, Weinandy writes,

He helpfully contends that the theological import of “the Word became flesh” in John 1:14 is best understood as “came to exist as a man” (p. 26, emphasis original), which, he argues, preserves the fact that neither the Word nor Christ’s humanity is altered; that is to say, the Word remains God and Christ’s humanity remains true humanity. Later, Weinandy makes the intriguing suggestion that John’s baptism of Jesus was understood by John the Baptizer “as being the preeminent act by which Jesus is made known, for in that baptismal act, Jesus is revealed to be the Spirit-anointed Son of God” (p. 61). This suggestion is built on Weinandy’s (perhaps overstated) contention that the Gospel of John as a whole is a theological interpretation of the prior Synoptic Gospels and therefore it “provides a deeper or more reflexive theological interpretation of the” Synoptic tradition (p. xii). From this, Weinandy questionably concludes that the theological reading provided by John offers a “more profound” perspective on “Jesus’ words and actions” (p. 434) than the perspective offered by the Synoptics.

There are a few points at which Weinandy’s interpretation is questionable. For example, after suggesting that for all the Gospels, “Peter … is and will be the rock of faith upon which the future church will be built,” he writes that “Peter stands alone at the epicenter of the entire gathering” in John 1:35ff (p. 71). One wonders if he would draw that conclusion without his aforementioned theological commitments. Similarly, in his discussion of the wedding feast of Cana in John 2, he writes that it is not “simply the celebration of the betrothal of a man and a woman”; rather, it “is the contextual graphic image of Jesus’ saving betrothal of the church, the ecclesial woman, personified in Mary” (p. 107). One wonders if it is truly likely that John’s intention was to place this level of theological significance on Mary in his account? Also, as one would suspect, Weinandy understands John 6 primarily as a “Eucharistic Discourse” with John 6:52–58 strongly supporting the notion of transubstantiation (i.e., that the bread and wine literally become the body and blood of Jesus).

Despite these and other shortcomings, Weinandy has provided a very helpful theological interpretation of John’s Gospel. He truly does draw out some substantial theological insights from the text while at the same time writing lucidly and even devotionally. Moreover, the thematic connections he makes as well as his comments on the relationship between the Synoptic Gospels and the Johannine Gospel at the very least give the reader food for thought and at times his points are compelling. It must be stressed that this is not a normal commentary that the busy pastor or NT scholar can consult to find Weindandy’s comments on a particular verse, since he discusses blocks of texts rather than providing verse-by-verse exegesis. Further, while exegesis is unavoidable on some level, as promised, his work is primarily theological not exegetical and as such it will not be useful for every person interested in a scholarly analysis of the Gospel of John. However, I hasten to add that his deep and oftentimes accurate and thought-provoking theological reading should garner a wide audience. I would highly recommend this book to anyone interested in an explicitly theological reading of John 1–13 atypical of a normal commentary, or for the reader desiring a theological nuanced yet devotionally rich approach to John’s Gospel.