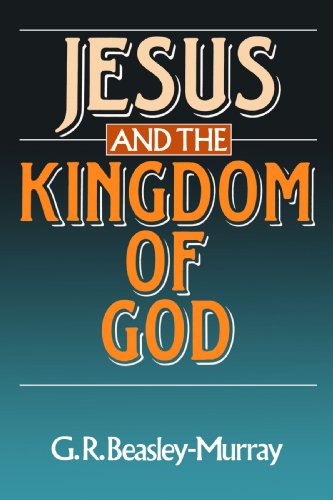 Jesus and the Kingdom of God

In the present book the author (=A) has set himself the ambitious task of attempting to tackle what are admittedly the two most central themes in Jesus’ teaching: the kingdom of God (=KG) and the Son of Man (SM). This procedure is unusual nowadays because the two themes have been divorced from each other: in Germany by radical criticism, which regards the combination of these two themes as secondary, and holds that Jesus used SM of someone else; and in Britain by those who try to resolve the title SM into a mere circumlocutional idiom of Aramaic. Another unusual element in this book is that whereas books on the KG concentrated on the scholarly discussion (e.g. N. Perrin’s, G. Lundström’s), or on a thematic presentation of the issues involved (e.g. Ladd’s, Ridderbos’s, Schnackenburg’s), the present book is really an exegetical study on the KG and the SM texts. For these two reasons, bespeaking its fresh approach, the book is a welcome contribution to the debate. One more merit of this work is that unlike past discussions of these subjects, which minimize the OT relevance, it offers a much needed treatment of OT conceptions relating to the KG, and thus places the teaching of Jesus in proper perspective.

In particular the book consists of three parts. In Part I, ‘The Coming of God in the OT’ (pp. 3–35), the KG is considered in the light of the theophany and the Day of the Lord. The theophany is traced to the Sinai traditions rather than to Near Eastern mythology, while the Day of the Lord is said to have had as its ultimate purpose the establishment of God’s kingdom. The Day of the Lord is an event rather than a date and is very similar to the theophany. In Israel’s traditions the theophany was probably primary while the Day of the Lord was a specialized application of it (pp. 15f). The Day of the Lord involved God acting in the historical sphere, it entailed judgment for those for whom it came, and it occurred at a time determined by him. The idea of kingdom is considered to be very early in view of the enthronement Psalms, and it is rightly developed in connection with Daniel. However, the A concedes too much to M. Noth’s arguments for the angelic interpretation of Daniel’s ‘one like a son of man’, as when he acquiesces that ‘in the Qumran literature it (the “saints”) is the title par excellence given to angels’ (p. 30, cf. p. 32). The correct statistics would seem to be that there are 11 references to angels, 9 to men and 6 are uncertain! On p. 32 Dn. 7:27 is misprinted as 7:37, while on p. 35 line 8 ‘god’ should be read as ‘man’.

In Part II, ‘The Coming of God in the Writings of Early Judaism’ (pp. 39–68), the concepts of the previous section are traced in apocalyptic writings. The juxtaposition of the present with the future is not foreign to Jewish eschatology, as thought previously (p. 50). The A wrongly, in my view, identifies ‘the kings and the mighty’ of the Parables of 1 Enoch with the Romans and dates that work in mid-first century ad (pp. 67f.). This has serious consequences for the understanding of the gospel SM. However, he rightly sees Danielic influence on the SM concept running through the Parables to IV Ezra.

Part III, ‘The Coming of God in the Teaching of Jesus’ (pp. 71–344), constitutes the bulk of the work, offering a detailed exegesis of KG, SM and Parousia sayings. (The footnotes are appended (pp. 345–416). Bibliography (pp. 417–431) and Indices (pp. 433–446) follow.) The sayings and the parables of Jesus on the KG are discussed according to whether they relate to the present or future. Here the persevering reader will get reward for his toil, but the atomistic treatment, the inevitably disconnected and somewhat vague discussions and the lack of connecting links, e.g. by way of summaries, often tend to leave the reader uncertain as to where he is being led, while not infrequently the impression is created that things are more complicated than they really are. In spite of the A’s sound scholarship, fairness to opponents, mature handling of the subject and commonsense exegesis, the discussions are sometimes not as deep or penetrating as they could have been, and occasionally matters are made a little too easy. For example, the debate on eggiken-ephthasen is solved rather superficially in favour of realized eschatology by having recourse to the Lexica and the apparent meaning of the Aorist ephthasen (pp. 71–80). This is, however, no guarantee that ephthasen eph’ hymas … refers to an accomplished event if the Greek idiom is properly understood. But the Aramaic is a complicating factor. The conclusion here is, however, clear: the kingdom of God comes with Jesus, and Jesus is the Messiah for the kingdom.

In the chapter on the SM, a virtual monograph of some 117 pages, the A enters the debate without any presentation of the problem and the state of the present discussion. As is usual he makes Lk. 12:8–9 par. the point of departure, but uses half the space in this section to make up for the lack of introduction, which ought reasonably to have had a section of its own. In view of the kind of positions that are propagated in Britain just now, this is a welcome discussion. It is, however, to be regretted that the two major studies referred to (p. 220) are Tödt’s (1959, ET 1965) and Higgin’s first study (1964), but no knowledge is shown of the monographs of Casey (1979), Higgins (1980) and Lindars (1983). The discussion is thus in important respects dated. In general the A sees Danielic influence on the gospel SM as well as on the SM of the Parables and IV Ezra. He is also of the opinion that the KG and the SM belong together. Herein lies the thrust of the book. Hardly anyone would welcome more warmly or agree more heartily with these two conclusions than the reviewer. At the same time the reviewer wishes that more attention had been paid to the total impact of the Danielic ‘SM’ on Jesus’ teaching. For then the treatment would have looked appreciably different. For example, the statement ‘There is no precedent in the OT or in Judaism of the Son of Man exercising the prerogative of forgiveness’ (p. 230) would, in the light of the powers given to the ‘SM’ in Dn. 7:14, and the explicit statements to that effect of the Daniel-influenced 1 Enoch, have been impossible. Nor can the A be said to have adequately answered his own question: ‘How can the Son of Man of Daniel’s vision be viewed in the first century as a humble and humiliated man, the subject of prophecies of rejection and death?’ (p. 247). The answer ‘the Son of Man of Daniel 7:13 must be understood in light of the righteous sufferer of the Psalms’ (ibid.) is, to my mind, not sufficiently motivated. The correct answer would rather seem to be found within the data of Dn. 7 itself.

These were just a few of the points of disagreement. But despite this criticism, the reviewer welcomes this sturdy book for all its positive elements as a solid contribution to the themes treated and a counterbalance to much ill-guided thinking about the KG and especially the SM. Students of these two subjects should not fail to consult it.