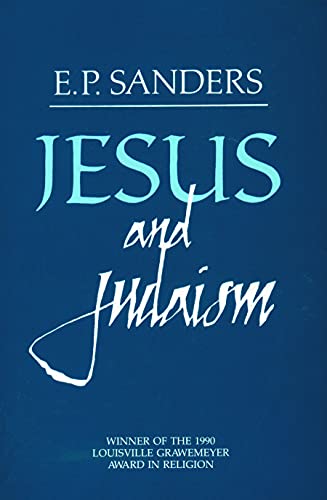 One of my heroes is Hans Andersen’s little boy who dared to say that the emperor had no clothes. Here are books by two men whose scholarly output has been largely devoted to following his example.

E. P. Sanders first came to notice by challenging the basic tenets of form criticism in The Tendencies of the Synoptic Tradition. Then, in Paul and Palestinian Judaism, he unmasked the caricature of first-century Judaism with which most New Testament scholars had operated. Now in Jesus and Judaism he continues the same crusade against those who label first-century Jews, and Pharisees in particular, as heartless legalists searching for salvation by accumulated merit. But his ruthless iconoclasm reaches much further, and there will be few readers who do not find that he wants to undermine some of their favourite assumptions. After reading this book one might well wonder if there is anything which can be taken for granted. It might well have been subtitled, to use his own phrase (p. 157), ‘commonly held opinions which should be queried’!

Not that Sanders’ aim is purely destructive. Far from it. He wants to establish his understanding of Jesus firmly on ‘the facts’ (a much-used phrase), and it is to that end that he strips away all that he cannot accept as ‘fact’. In particular, he is sceptical of the tendency among recent interpreters of Jesus to base their reconstruction on elements of his teaching which are claimed to pass the tests of authenticity. His scepticism is more far-reaching than theirs, in that the sayings tradition as a whole is for him at best a subsidiary and uncertain source of historical information. It is rather in certain aspects of the narrative tradition that he expects to find firm fact. It was not as a teacher that Jesus was executed, and it was not out of a new teaching that Christianity grew.

So what was Jesus’ intention? How did he relate to first-century Judaism? Why did he have to die? What was it about him that gave rise to a new religious movement?

Starting from Jesus’ demonstration in the temple, Sanders argues that his aim was the restoration of Israel(echoes of The Aims of Jesus by Ben Meyer, Sanders’ colleague). His aim was not militaristic, but neither was it a call to repentance (here Jesus differed from John the Baptist); central was the vision of a new temple for the new age, while the selection of twelve disciples symbolized the eschatological community. He was the prophet of the coming ‘kingdom’. (Even here, however, Sanders debunks most of the sayings about the kingdom of God, and looks to Jesus’ acts for his historical foundation.) His miracles authenticated his message; here Sanders toys appreciatively with Morton Smith’s Jesus the Magician hypothesis, but finally opts for ‘prophet’ as a better model. Jesus expected the new kingdom to include sinners. Here Sanders’ provocative article in JSNT 19 is taken further, aiming to overturn most New Testament scholars’ assumptions, especially those of Jeremias; what distinguished Jesus from other Jews, Sanders believes, is not that he wanted sinners to repent (so did the Pharisees), but on the contrary that he accepted the wicked (not just the common people) without requiring them to repent and make restitution as Jewish law and piety required. A ‘kingdom of God’ containing unrepentant sinners was as shocking to good Jews as it is to us, and Sanders is not reluctant to shock! ‘I realize that my proposal will not be a popular one’, he says (p. 208). Its theological implications are surely serious, but Sanders sticks rigidly to his brief as historian rather than theologian, and leaves others to pick up the pieces. Indeed, he has ‘been engaged for some years in the effort to free history and exegesis from the control of theology’ (p. 333).

Jesus was, then, an ‘eschatological charismatic’, not unique as such within Judaism. So why was he persecuted and killed? Sanders argues at length that it was not the law that was at issue—Jesus did not break or teach against the law in any fundamental way. There was ‘no substantial conflict between Jesus and the Pharisees’ (p. 291). Rather it was his attacks on the temple, his self-appointed role as spokesman for God, and his daring inclusion of unrepentant sinners in his ‘kingdom’ which caused the priests (not the Pharisees) to dispose of him.

In depicting Jesus finally as ‘a visionary who was mistaken about the immediately future course of events’ (p. 327), Sanders consciously dissociates himself from those who reconstruct Jesus to fit their own prior religious commitment. His own reconstruction, he claims, is uninfluenced by, and does not correspond to, his own religious beliefs. Whether this proudly asserted ‘freedom from theology’ is so self-evident a virtue as Sanders imagines may be open to debate. But in any case this is surely no ‘objective’ historian’s view, for the conclusion that ‘Jesus accepted “covenantal nomism” ’ (p. 336), while it may not be tailored to Sanders’ religious presuppositions, does fit remarkably conveniently into his previously declared scholarly position!

Such a trenchant, wide-ranging and clear-sighted attack on most people’s cherished ideas cannot be expected to meet with instant acceptance. It is a book we shall all have to notice, as was the case with Paul and Palestinian Judaism. But my impression, for what it is worth, is that Sanders’ iconoclastic zeal has this time carried him too far, and that few will be prepared to adopt his position as a whole. He will blame this, no doubt, on their prior commitment to the traditional Jesus which prevents them, as it did the emperor’s courtiers, from seeing the true state of affairs. But I wonder whether Sanders’ X-ray vision may not in fact have failed to register some very important theological clothes.

Jacob Neusner has been as bold a questioner of traditional stereotypes in Jewish studies as Sanders is in New Testament scholarship, and a far more prolific one. But this latest offering provides no new shocks. It consists largely of material already published elsewhere (in quite different contexts), brought together to provide an introduction to first-century Judaism for the student beginning a course on Christian origins. Neusner writes as a believing Jew who wants Jews and Christians to learn to appreciate one another’s positions, as two parallel developments from the common religion of what we call the Old Testament; each represents, he claims, a rebirth and renewal after disaster (the cross for Christians, the destruction of the temple for Jews).

The first chapter (‘The World of Jesus’ People’) constitutes in itself a brief and attractive study of first-century Jewish history, with proper attention to its political, social and economic aspects. This chapter alone gets near to fulfilling the aims of the book, and is suitably angled to the beginning student.

None of the other four chapters is so satisfying. Three of them survey significant currents in Jewish religion: ‘Sage, Priest and Messiah’; ‘The Pharisees’; and a survey of Jewish reactions to the disaster of ad 70, focusing on the bold reinterpretation preached by Yohanan ben Zakkai. The fourth, a longer study of the Rabbinic traditions about Hillel, is an interesting source of material for the student of Jewish tradition, but its scale and approach are out of keeping with the rest of the book. Here we see Neusner the radical form critic, whose historical scepticism outranks even that of Bultmann; the study of Hillel is proposed as a comparative model for study of the ‘historical Jesus’, and Neusner believes that in neither case is the search for ‘historical fact’ either appropriate or necessary.

Altogether a disappointing little book, which begins well but fails to come together; it reads like what it is, a collection of unconnected pieces intended for different types of readership. The beginning student for whom it is designed is better served elsewhere.