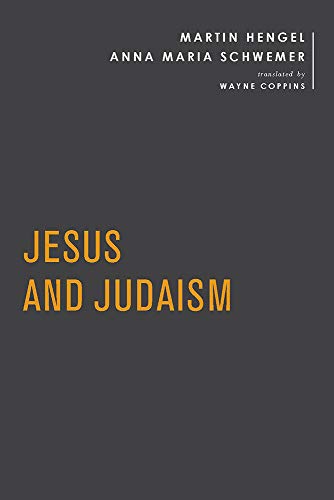 Martin Hengel and Anna Maria Schwemer’s 2007 co-authored volume on the early years of Paul and the Jesus-movement will already be well-known to English-speaking Neutestamentler. Their newest translated volume, Jesus and Judaism, joins Paul between Damascus and Antioch (trans. John Bowden [Louisville: Westminster John Knox, 1997]) as a volume that must be consulted by New Testament scholars when studying the earliest years of the Jesus-movement. Jesus and Judaism is the first in a planned four-volume series with Mohr Siebeck entitled Geschichte des frühen Christentums, which aims to describe the history of early Christians from Jesus through the end of the second century. As the title suggests, the first volume explores the Jewish world in which early Christianity grew up and focuses on the person of Jesus.

This hefty tome is divided into preliminary observations followed by seven parts. The authors set out their vision for the series and put forward the thesis that the early Jesus-movement is best described as a development from within Judaism that makes sense within the diversity and historical exigencies of Second Temple Judaism. Part 1 then offers a historical sketch of Judaism from Pompey to the fall of Jerusalem (63 BCE–70 CE) while also examining the various religious parties that occupied Roman Palestine. The following section begins to turn to Jesus by outlining the scholarly quest for the historical Jesus and analysing the sources that point the way forward on this quest. Part 3 engages Jesus’s early experiences in Galilee and devotes particular attention to John the Baptist. Hengel and Schwemer consider Jesus’s activity and proclamation in part 4. They locate a key difference between Jesus and John the Baptist in Jesus’s proclamation of God as Father. In part 5, Hengel and Schwemer take up Jesus’s healings, exorcisms, and resurrections. They regard the stories in the Gospels to “have a concrete basis in the actions of Jesus,” although Jesus may be “more foreign” in these stories than post-Enlightenment Christians sometimes like to believe (p. 525). Part 6 examines the last week of Jesus’s life and gives attention to the trial. For example, Jesus’s silence could be regarded as an admission of guilt due to a tradition that goes back to the Twelve Tables (p. 637–38). The final part examines the resurrection testimonies and gives particular attention to 1 Corinthians 15:3–8 since it is the earliest report. They argue that faith and reality cannot be separated when trying to understand the resurrection. For contemporary readers, it may be the resurrection rather than the cross that serves as the point of offense and foolishness in the gospel (see pp. 684–85).

The authors summarize some of the chief findings of the book in a concluding note. They hold that Jesus’s proclamation that the kingdom of God is in the process of realization is key to understanding who Jesus is. Likewise, although Jesus presents himself in prophetic terms, the term prophet on its own is not sufficient to describe Jesus. Jesus is differentiated from his prophetic herald John by his messianic claim. Finally, the disciples are called to follow Jesus and are sent out by him. The disciples thus provide continuity between Jesus himself and the early Jesus-movement.

While this last point serves as a transition to volume 2 in the series (Die Urgemeinde und das Judenchristentum [Tübingen: Mohr Siebeck, 2019]), Hengel and Schwemer’s study of Jesus highlights the importance of studying Jesus himself if one is engaged in historical study of the Jesus-movement. The study of early Christianity cannot be undertaken without a good grasp of the movement’s founder and focus of worship. The authors rightly point out that it is unnecessary to assume that there is a gulf between Jesus and later believers. The disciples provide both points of transition and points of continuity. The authors are also correct to emphasise the importance of understanding Jesus within the Judaism of Roman Palestine. The claim that the Jesus-movement can be described wholly as a child of Judaism will be more controversial. However, if one allows that Roman Palestine had encountered Hellenism not only in the aftermath of Alexander the Great and Pompey but also in the intervening Maccabean period, it becomes easier to see what Hengel and Schwemer mean when they seek to describe early Christianity in thoroughly Jewish terms.

In a review of the German edition of this book, Peter Tomson wrote that Hengel and Schwemer have laid “a fascinating and important book” on the table (“ein faszinierendes und wichtiges Buch”; JSJ 40 [2009]: 404). There is something wonderful about being guided along in the current of Jewish and Jesus studies by the work of two great historians. The prose is lively, a testament to both the authors and the translator. The argument is carefully laid out. The authors do not wobble in their position, nor does their footing falter. While Anglophone scholars will be familiar with Hengel and Schwemer from their other translated books, they will also be grateful that English is now one of the languages around the table where Hengel and Schwemer’s book lies.