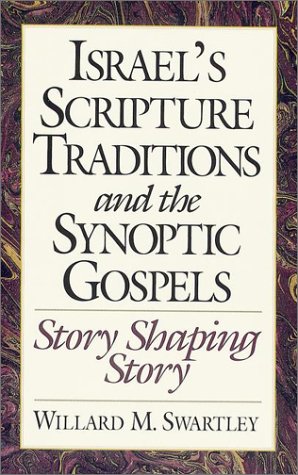 This book proposes that the composition and narrative form of each synoptic gospel was influenced by major OT theological traditions. Swartley claims that the content and structure of both the Galilee and Jerusalem sections of the synoptics were shaped respectively by predominant motifs found in the Sinai (northern) and Zion (southern) faith traditions. While the Galilean and journey narratives were shaped by and in turn develop Israel’s northern traditions of exodus-liberation and way-conquest, the pre-passion and passion narratives, located in Jerusalem, reflect and develop Israel’s southern traditions of temple and kingship. Swartley’s method is primarily oriented to what is known as compositional analysis which examines both structural and narrative features. To a lesser degree, Swartley also utilizes tradition history. He argues that there is an intrinsic relationship between narrative analysis which explicates the meaning of the structure and tradition history which often determines the religious meaning of a text behind the structure.

The study is divided into seven chapters. In the first chapter Swartley briefly surveys prior attempts at understanding the role of the OT in the NT and proposes his own method of enquiry. Chapter 2 introduces the four major OT faith traditions which are supposedly at the heart of the synoptics’ story of Jesus. Chapters 3–6 demonstrate the extent and nature of the influence of these traditions on the narrative form and content of the synoptics. More specifically, Chapter 3 tries to show that the exodus and Sinai traditions of deliverance and wilderness influenced the Galilean sections (Mk. 1:14–8:27; Mt. 4:17–16:12; Lk. 4:16–9:50). Chapter 4 seeks to demonstrate that ‘conquest traditions’ (such as the theme of ‘divine warrior’) played a major role in forming the journey sections (Mk. 8:27–10:52; Mt. 16:13–20:34; Lk. 9:51–19:44). Chapter 5 tries to show that temple traditions were influential in the composition of the pre-passion sections (Mk. 11:1–13:37; Mt. 21:1–25:46; Lk. 19:45–21:38). And Chapter 6 argues that kingship traditions played a significant role in the formation of the passion sections (Mk. 14:1–16:8; Mt. 26:1–28:20; Lk. 22:1–24:53). In the final (seventh) chapter, Swartley not only synthesizes and summarizes the results, but he gives brief analyses to the synoptics’ hermeneutic, symbolic use of Galilee and Jerusalem, and purpose of the narrative pattern. The book concludes with two appendices. The first relates the results to the fourth gospel and to certain non-canonical gospels. The second attempts to further verify the results of the study by showing that distinctive features in the synoptics generally corroborate Swartley’s proposals.

Swartley’s overall proposal is intriguing and his broad method of combining narrative analysis with tradition history is sound. I find the relationship between the OT kingship theme and the synoptics’ passion accounts most persuasive. There are, however, two methodological concerns that I have with the work. First, although Swartley does an admirable job on the level of intratextuality, he has not adequately addressed the features and criteria associated with intertextuality. Throughout the work, especially Chapters 3–6, I was left wondering how Swartley justifies thematic and textual parallels in the absence of dictional and exegetical coherences. Although ‘echoes’ are frequently presented in support of the theses, the validity of this evidence is not demonstrated. Secondly, Swartley’s proposal could have been significantly strengthened by incorporating early Jewish exegetical traditions of those OT texts which were supposedly echoed by the synoptics. This neglect suggests that the synoptic writers were only influenced by OT texts and not their contemporary interpretations.