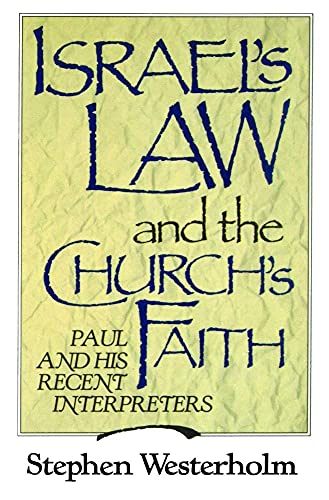 Israel’s Law and the Church’s Faith. Paul and his Recent Interpreters

Stephen Westerholm has written an excellent book. It is easy to read, clearly argued, exgetically based, and theologically sensitive. It tackles one of the most debated issues in biblical studies: Paul’s view of the Mosaic law. But what makes the book not only excellent but important is the perspective on this issue that Westerholm takes. The last ten years have seen books on Paul and the law pouring off the presses, all of them reacting to E. P. Sanders’ epochal Paul and Palestinian Judaism (1977). Most take the line that Sanders’ revisionist interpretation of first-century Palestinian Judaism requires a corresponding revision in our interpretation of what Paul says about the Mosaic law. For if Jews in Paul’s day did not view the law, or ‘works’, as a means of salvation—as Sanders argues—then the traditional interpretation of the law/gospel, works/faith, merit/grace antitheses in Paul are called into question. Paul uses these antitheses when he argues with Jewish opponents; and a new understanding of what his opponents were saying appears to demand a new understanding of what Paul was saying. Yet these antitheses lie at the heart of traditional Protestant theology. The new interpretations of Paul and the law have been severely critical of this tradition, which is usually traced to Luther, who is accused of reading his own struggles with Roman Catholic merit theology into Paul. It is against this background that Israel’s Law must be seen to be appreciated. For Westerholm unabashedly defends Luther’s basic interpretation of what Paul has to say about the law. In doing so, he not only provides students with a valuable critique of, and alternative to, the current spate of ‘revisionist’ books; he also defends doctrines that have been basic to Protestant theology, preaching and lifestyle since the Reformation.

Westerholm, who is Assistant Professor of Biblical Studies at McMaster University in Ontario, Canada, sets his own interpretation of Paul in the context of the recent debate. The first part of his book contains valuable sketches of the contributions of key scholars on issues central to the debate over Luther’s interpretation of Paul: Schweitzer and Wrede on the centrality of justification by faith; Montefiore, Schoeps and Sanders on the alternative interpretation of Paul and his Jewish heritage; Kümmel and Stendahl on the role of Paul’s ‘conscience’ in his theology; Bultmann, Wilckens and Sanders on Paul’s critique of the ‘righteousness of the law’; and Drane, Hübner and Räisänen on the consistency of Paul’s teaching. The student who wants an overview of this issue could not do better than start here. Westerholm disappoints the reader hoping to find direct interaction with these scholars; he allows his criticisms to arise through his positive exposition in the second part of the book. Yet his decision is probably the right one: it keeps the focus on the issues rather than on particular scholars and their idiosyncratic presentation of the issues.

In the second part of the book, Westerholm takes up the issues raised by the scholars he surveys in the first part. On most of these issues he ends up preferring Luther’s viewpoint to those of the great Reformer’s modern detractors. Against those who would ‘soften’ or eliminate the typical Lutheran contrast between ‘law’ and ‘gospel’, ‘faith’ and ‘works’, by blurring the distinctions between these pairs, Westerholm insists on the full force of the antithesis in Paul. ‘Law’ has nothing to do with faith; nor can ‘works of the law’ be confined only to certan kinds of works. Westerholm is not as clear as Luther that ‘justification by faith’ is the centre of Paul’s theology. But he does argue that the doctrine is far more than a ‘subsidiary crater’: for it reflects Paul’s passion to guard the grace of God from any admixture with human merit. Here also Westerholm finds Luther to be a true ‘paulinist’. Unlike Luther, however, Westerholm is not convinced that the Jews in Paul’s day were arguing for ‘works’ in distinction from grace. Westerholm endorses Sanders’ central conclusion—Jews did not believe that a person could be saved by works—and goes so far as to criticize those who would construct Jewish theology on the basis of Paul (in which category he apparently puts Luther). It is Paul, not Judaism, who distinguishes between ‘faith’ and ‘works’—a distinction made necessary by Paul’s view that sinful human beings must rely exclusively on God’s grace. While wrong about the Jews, then, Luther was right to find in Paul an insistence that salvation is based on divine grace to the exclusion of human achievement. Westerholm also agrees with Luther—against Sanders—on the reason why human achievement, or the law, cannot justify. It is sin, according to Romans 1–3, that makes it impossible for the law to justify a person. What is the purpose of the law, then? According to Luther, its ‘principal’ purpose was to reveal human sinfulness. While he does not think that Paul makes this function of the law as important as does Luther, Westerholm does find in Paul’s teaching about the law bringing a ‘knowledge’ of sin the ‘foundation’ for this idea.

Westerholm’s defence of Luther’s views on these matters is a valuable service to the church: for Protestant Christians have—rightly, in my opinion—believed them to be clearly taught in Paul and to be vital to biblical Christianity. But Westerholm’s defence of Luther’s views on two other issues would not command such general acceptance. First, Westerholm believes that both the OT and Paul claim that the Mosaic law promises salvation to those who obey it. That God knew from the outset it could never be obeyed so as to bring salvation, and so planned ‘from the foundation of the world’ to provide Christ as the only means to salvation, does not remove the fact of the promise. I think Westerholm is right on this, but many would disagree. Second, Westerholm argues that Paul does not make the Mosaic law a source of guidance for Christian ethics. This denial of the so-called ‘third use of the law’ agrees with Luther (although this is a debated point), but is contrary to Calvin and the stream of reformation Christianity derived from him (e.g. Puritanism). While sympathetic to Westerholm’s view on this point, I wonder whether this states the matter a bit too strongly; at the least, one would have expected interaction with Ephesians 6:1–3. In light of these points, then, I suspect that some who are generally sympathetic with Westerholm’s perspective will nevertheless think that his scheme is too‘Lutheran’.

I am hesitant to voice criticism of a book that is so well done and with which I agree to such a considerable extent; but I wish to raise at least two questions. First, if Sanders is right about Palestinian Judaism, and ‘works of the law’ are works of genuine obedience to the law, just what is Paul doing when he denies that works of the law can justify? Paul appears to be implying more here than that Jews did not, as Paul did, carefully separate ‘works’ and faith or grace. Whatever the ‘time’ of justification, Paul seems to be saying that Jews made obedience to the law the basic condition for salvation. Is it possible, then, that Sanders’ reconstruction of first-century Judaism has too rigidly excluded elements of ‘legalism’? Second, what is the situation of OT saints who lived in the era of the Mosaic law? Clearly they were ‘under the law’ in the sense that they were bound to obey its precepts; equally clearly they were not under the ‘curse’ of the law. What, then, was their relationship to the law? And how does their situation affect Paul’s salvation-historical ‘old covenant/new covenant’ scheme?

Israel’s Faith is written at such a level that pastors, students and scholars alike can profit from it. And profit from it they should. The debate about Paul and the law is no narrow academic concern: it affects our theology at a vital point. The reformers saw this, and insisted on certain distinctions that have been the hallmark of Protestant Christianity—faith versus works, law versus gospel, grace versus human achievement. We, the heirs of that tradition, should not surrender these distinctions easily. And no better arguments for maintaining them against the onslaught of criticism can be found than are provided in Israel’s Faith.