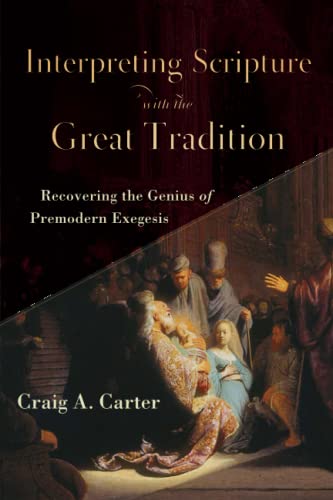 Interpreting Scripture with the Great Tradition: Recovering the Genius of Premodern Exegesis

A great chasm has been dug within biblical studies, separating premodernity from the insights of modern scholarship. Bridges have been erected to usher students of the Bible across this chasm to the supposed firmer ground of modern exegesis. Upon their arrival, many students (both within mainline as well as evangelical institutions) have been trained in the latest exegetical procedures reared within the bosom of historical-grammatical methods and modern philosophical assumptions. Thinking they have crossed the bridge to brighter horizons, such training has led them to a spiritual desert, putting the essence of the gospel at risk and robbed the church of understanding the supernatural text which lays on their laps and lecterns. So argues Craig Carter, professor of theology at Tyndale College and Seminary, in Interpreting Scripture with the Great Tradition: Recovering the Genius of Premodern Exegesis. In this work, Carter enacts a daring rescue mission to recover the premodern interpretation of Scripture and help readers understand the spiritual vacuum that has been created by modernity.

Carter launches his discussion by describing his dilemma following seminary in seeking to understand Isaiah 53 apart from the historical-critical methods in which he was academically reared. From here, Carter orbits around premodernity and its theology of Scripture. He observes the foundation of divine inspiration as crucial for a premodern understanding, alongside a comprehensive theism that views God as both transcendent and personal. This was seen in the person and work of Jesus and the Trinitarian economy of salvation and communication via Scripture. The apostolic message and interpretation of the Old Testament was the key that unlocked ongoing interpretive procedures within the early Church. Added to this was the Christian acquisition of Platonism. This was no haphazard exercise but was seen as the “philosophical expression and the framework of the world-picture in terms of which the proclamation of revealed truths was made” (p. 66). Augustine of Hippo represents the mature reflection of this tradition which continued mostly unabated for one thousand years. Thus, modernity represents “an astonishing reversion to the pre-Christian naturalism of the ancient world” (p. 85). Premodern Christians would not abide, nor comprehend, the extreme bifurcation of natural and supernatural that has dominated the modern era.

Moving on, Carter begins to deconstruct the modern project of biblical interpretation. The Enlightenment, according to Carter, led to a “complete rejection of biblical authority” (p. 115). Enlightenment thinkers consciously sought to raze the premodern worldview and replace it with naturalistic presuppositions and a metaphysic devoid of transcendence. This worldview, in turn, led to the liberalism which took hold in Protestant Christianity in the 19th century, leading to the ongoing demise of mainline denominations. Though it has been more evident within the mainline, the infection of modernity still exists and continues to threaten the gospel ministry of evangelical churches. Thus, Carter puts forth the antidote of ressourcement and the recovery of premodern exegesis for the flourishing of Christian faith in the 21st century.

Part 2 elucidates Carter’s antidote to the modern ailment. He aims to recover the unity of Scripture centered on Jesus Christ (ch. 5). In premodernity, Scripture reading was a spiritual exercise, arising from a Holy Spirit-induced interpretative humility, guided by the hermeneutical bumpers of the regula fidei and the entire canon of Scripture. The booster shot of this antidote is the proper recovery of the literal sense (ch. 6). The literal sense as we know it today was transformed by the “philosophical naturalism” smuggled in by modern interpreters (p. 166). Thus, Carter does an excellent job towards rescuing and commending the premodern understanding of the literal sense. The literal, or plain sense of Scripture was highly valued and understood as crucial for proper interpretation according to Christ in light of the Great Tradition. The spiritual sense grows out of the literal sense, represented in the exegetical practices of Augustine. Essential to the antidote is seeing and hearing Christ in the Old Testament (chapter 7). This includes grasping the concept of prosopological exegesis which seeks to identify various writings of Scripture as spoken from the divine prosopa, or specific members of the Trinity. This exegetical practice is seen among the prophets, the apostles, as well as the writer to the Hebrews. Early interpreters carried forth this mode of reading Scripture, understanding the trinitarian nature of inscripturation. This can only be accomplished with a firm belief in the unity of Scripture centered on Christ. Concluding this section, Carter asserts that this recovery plan is vital to “the growing and flourishing of healthy churches and the powerful, biblical preaching of the gospel” (p. 223).

Carter’s goal is simple yet profound: rescue the gospel from the grips of non-Christian biblical interpretation. For those already steeped in this discussion, Carter weaves together discussions in a cogent and applicable way. For those unfamiliar with premodernity and its interpretative priorities, reading Carter might be like drinking from the proverbial fire hydrant—too much too fast. Carter does well to assert that modernity is “a dagger in the heart of our faith” (p. 111), but for some readers it might take more convincing and perhaps a gentler approach for the dagger to be revealed. That said, his rhetoric is fiery but not foolhardy. Carter brings together a camaraderie of biblical scholars, historical and systematic theologians, and others to bring to light those things that have been debated in the corner rooms of the academy. He leans upon the accomplished work of others and humbly points to their expertise while demonstrating his own. His points are well taken, but some readers may need to sit with Carter and slowly digest his antidote before perceiving its curative effects. As a final note, Carter does well to add to the definition of the “Great Tradition” by including the interpretation of Reformers (particularly John Calvin) who sought to rescue the church while not dismantling its time-tested exegetical practices. This reader was already convinced of Carter’s thesis, yet he added much needed buttressing to the appreciation of the “genius” of premodern exegesis. For others less familiar with the main arguments, reading Carter presents a strong case in need of careful consideration. Therefore, it is a welcome entry into discussions of ressourcement from an evangelical perspective.