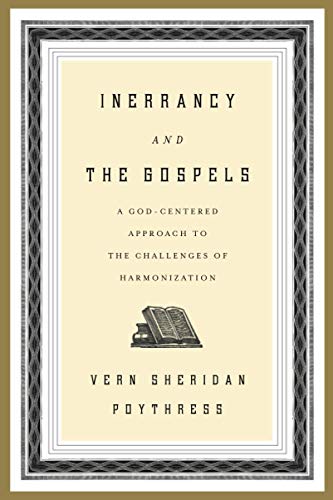 Inerrancy and the Gospels: A God-Centered Approach to the Challenges of Harmonization

Inerrancy and the Gospels is the latest in a series of related books written by Vern Poythress that Crossway has published. Building upon his book Inerrancy and Worldview, Poythress defends an approach for harmonizing the various differences between the four Gospels.

The book divides into seven sections. Section one sets the inerrancy of the Bible as the foundation for harmonizing the Gospels. He briefly summarizes the contributions of various works in favor of the view that the Bible is self-authenticating in regards to its inspiration and authority. Next, he surveys the alleged discrepancies in the story of the centurion’s servant (Matt 8:5–13; Luke 7:1–10) in order to help readers see how various proposed reconstructions use the data provided by the texts to harmonize the accounts. With this opening example, he demonstrates how differences, while not contradictory, often highlight certain theological emphases being drawn out by the evangelists.

Section two offers various principles for harmonization. Poythress avoids the glib approach to harmonization that evangelicals are often characterized as instituting. Overly rigid approaches, which force modern standards for recording history into a first-century context, have unfortunately not only plagued the Bible’s critic but also some of its most dogmatic defenders. Fortunately, Poythress, while maintaining the doctrine of inerrancy, carefully guides the reader through principles for harmonization that display sensitivity to the cultural context, the limited nature of the data for each event described in the Gospels, the way language works, and the theology inherent in all events in the Bible.

Most evangelical NT scholars will approve of the careful explanations and insights Poythress makes in the first two sections; the third section, which discusses various attitudes in harmonization, could have more of a mixed response. Poythress approaches the task of harmonization from what could be termed the “top-down”: the NT makes self-attesting claims to its inerrancy as the Word of God, and one should accept this claim and, thus, seek to harmonize discrepant passages. He is aware that critics will charge this approach with being biased and involving circular reasoning. Yet in response he explains that in some sense all truth claims are circular because they are relying on certain presuppositions derived from some source of authority (e.g., one’s own reason). Furthermore, he rightly suggests that once someone has made the commitment to see the NT as completely true based on its self-attesting authority and the internal witness of the Holy Spirit, it is insincere for the person to act as if they are approaching the text as completely neutral. He is also correct to challenge the critics’ assumption concerning their own neutrality. Yet without disregarding the validity and helpfulness of the “top-down” approach, many would prefer to begin with a “bottom-up” approach when engaging the skeptic. For example, in his chapter entitled “The Legitimacy and Limits of Harmonization,” in Hermeneutics, Authority, and Canon, Craig Blomberg argues for the legitimacy of harmonization within the canon by appealing to the standard approach taken by scholars in extrabiblical historiography.

In other words, instead of starting with inerrancy, many apologists lead off with the general historical reliability of the Gospels as witnesses to Jesus when engaging with non-believers concerning discrepancies. At least with the unbeliever, perhaps Christology serves as a better starting point, rather than Bibliology (see Daniel B. Wallace, “My Take on Inerrancy” [http://bible.org/article/my-take-inerrancy]).

It is important to note that Poythress does give credence to various studies that seek to demonstrate the general historical reliability of the NT. Nevertheless, though there is overlap, readers should be aware that there is a difference between Poythress and some other scholars who affirm inerrancy, such as Blomberg and Wallace, in their approach to harmonization (i.e., what I have labeled as “top-down” versus “bottom-up” approaches).

Section four addresses the synoptic problem and temporal order of events in the Gospels. Concerning the synoptic problem, Poythress affirms the possibility of many sources—both written and oral—in use by the evangelists. However, he deems the “situation far too complex for us to draw firm conclusions” and that the synoptic problem is “unsolvable,” which provides another reason to focus on the Gospels in their present form (p. 123). Concerning chronology, Poythress notes that the Gospels should not be understood to be in chronological order unless an event includes a temporal marker. He recognizes that in some cases two episodes can appear linked, yet it can remain unclear if the events are linked temporally or topically.

In sections five through seven, Poythress provides numerous test cases of alleged discrepant accounts to demonstrate how one should proceed with the task of harmonization. In part five, Poythress analyzes four individual cases. Part six focuses on how to handle the differences in the speeches reported in parallel Gospel passages. Finally, in part seven the book closes with two final examples of harmonization (raising Jairus’s daughter and blind Bartimaeus). Throughout these test cases, Poythress overviews how past scholars have harmonized and offers his preferred solution by carefully analyzing the information given by the Gospels and not allowing mental pictures of the event to provide added details that in many cases cause the difficulty. He rightly expresses humility in acknowledging his preferred harmonization is only a possible solution.

As the comments in appreciation of the book throughout this review indicate, I would recommend this book to those who want to think deeply about the differences in the Gospels. Combined with other resources, Inerrancy and the Gospels would make a helpful addition to the assigned texts in a course focusing on the Gospels and could facilitate further discussion on different approaches to the task of harmonization.