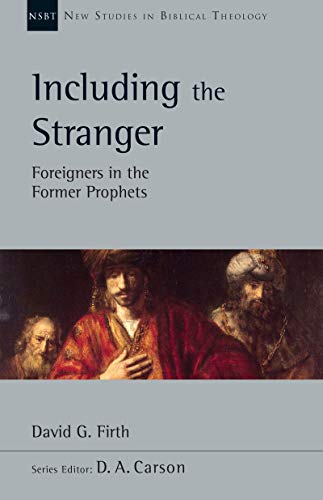 Including the Stranger: Foreigners in the Former Prophets

David G. Firth is a tutor in Old Testament at Trinity College, Bristol. He writes from a wide experience of being “other” “in a strange land” (pp. 1–3). Between introduction and conclusion, Firth addresses each book in successive chapters. Reading the Former Prophets together, he notes three main themes (pp. 173–86). Firstly, all nations are under the sovereign rule of God, and he deploys them to serve his redemptive plans and purposes. This applies whether they operated within or beyond the boundaries of the Promised Land. Secondly, Israel was the means of making Yahweh’s person, character, and purposes known to the nations. Thirdly, “just as foreigners who commit themselves to Yahweh can become part of Israel, so also Israelites who abandon Yahweh lose their status as his people” (p. 177). The line separating “us” and “them” was never ethnicity or geography. God’s people are defined as a “faith community” (p. 184). Building on Wenham’s Story as Torah (Grand Rapids: Baker, 2000), he argues that what Torah defined, the Former Prophets illustrate through narratives of events that exemplify these themes (pp. 7–11). They continue throughout the rest of the Scriptures (pp. 178–83).

From the outset, any reading of the Former Prophets must confront the horrors of חֵרֶם warfare. Firth attempts to address the issue by introducing a brief discussion of genre, arguing that these descriptions deploy hyperbole (pp. 13–18), a term which strikes this reader as inappropriate. It is true that these accounts are approximations, but they are not exaggerations (see the discussion in John M. Frame’s The Doctrine of the Word of God [Phillipsburg, NJ: P&R Publishing, 2010], 167–76). In a world of refugees and random bombings, there can be no hyperbole when describing such horror. The questions pertaining to חֵרֶם warfare stand regardless of the body count, but it is not the purpose of this book to answer those questions. Firth’s work helps the reader to better understand these events within the context of God’s wider engagement with the nations, noting his justice and grace to very cruel and dysfunctional people, whether Israelite or gentile.

In the book of Joshua, Firth identifies Rahab and Achan as key exemplars. Rahab is the extreme “other” who crosses the line to become “us.” The contrast is “an Israelite of the Israelites.” Firth notes the similarity with Paul (Phil 3:5; pp. 24–25). Achan places himself under the same judgement as the Canaanites. Firth points to the inclusion of the Gibeonites, the faithful example of Caleb (a descendant of Esau) and his family’s honored place in Israel, along with the right of resident aliens to access the cities of refuge. It is the proximity of idolatry and the threat of syncretism that are the concern.

In the book of Judges, Firth points out the focus on God’s use of foreign nations to punish Israel’s unfaithfulness, as per Deuteronomy 28:7, 25 (cf. Judg 2:2, 11). God also uses foreigners to save Israel. Othniel is a Kenizzite. Shamgar is “the son of Anath,” an Egyptian goddess. Jael is married to a Kenite, a descendant of Moses’s father-in-law. She is “most blessed of women” (Judg 5:24). The boundary is whether one is an enemy or a lover (in the sense of covenant commitment) of God (v. 31). Firth points to a trajectory of Israelites who become more depraved than their Canaanite neighbors, starting with Gideon, to Micah, Samson, the tribe of Dan, and through to the Benjaminites (Deut 7, 20), who are akin to Sodom and Gomorrah (cf. Judg 19–21; Gen 19).

Turning to the Books of Samuel, Firth observes that “Samuel uses foreigners as a means of evaluating Israelites” (pp. 93–94), featuring individuals rather than nations. These include Uriah, Benaiah, Ittai, Hushai, and Araunah. These foreigners highlight what it means to be faithful (p. 132). David’s treatment of the Gibeonites contrasts with Saul’s treatment of the priests at Nob. Firth observes the parallel abuse of women, contrasted with the characters of both Tamar and Bathsheba (p. 124).

In the Book of Kings, Firth focuses attention on Solomon’s prayer for resident aliens, and the function of the temple “that all the peoples of the earth may know your name” (p. 145). He links this prayer with the cairn at Jordan (Josh 4:24), David’s statement confronting Goliath (1 Sam 17:46), and Hezekiah’s prayer (2 Kgs 19:19). He notes contrasting pairs of characters: Pharaoh’s daughter and the Queen of Sheba, the craftsman Hiram (paralleling Bezalel) with the king of the same name, Jezebel and the widow of Zarephath, Naaman and Gehazi. In keeping with the exemplar of Achan, he singles out Ahaz and Manasseh, and cites the constant affirmation that God controls the nations, including Assyria and Babylon.

At a time of impassioned focus on refugees, racism, and national identity, Firth has produced a timely contribution. He reminds us that, while national identity is a reality through which God works in history, God’s people are defined by their faith in him, and faithfulness to him. Under Old and New Covenant, the door has always been, and remains, open for people of every nation, tribe and language to make that commitment, finding their salvation, unity and identity in his person and saving work. Axiomatically, syncretism moves those who are nominally God’s people beyond the pale. Firth rightly concludes, “God is not a petty racist, but a God whose purposes have always included all peoples, irrespective of ethnicity” (p. 184).