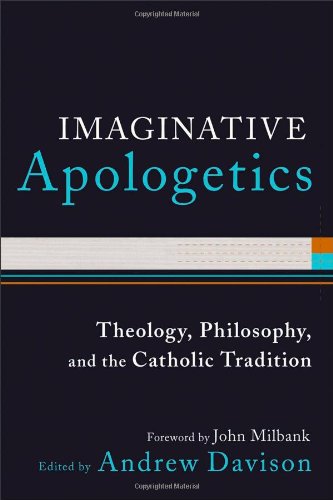 In the twenty-first century West, Christians are faced with the challenge of defending the faith in an environment in which hostile apathy or genial indifference are increasingly common. In Imaginative Apologetics, ten scholars offer a bracing and insightful perspective on this challenge, writing from a range of disciplines, from theology and philosophy to literature and the sciences. The editor, Andrew Davison, sums up the book's approach as making the case “for a version of Christian apologetics-theological, philosophical, and 'catholic'-that embraces the whole of human reason and takes an expansive view of what it means to be a human being” (p. xxvii). He notes that although most of the contributors are Anglican or Roman Catholic, the book is intended for “readers of all traditions” (p. xxviii). In fact, it is this “catholic” vision that grounds the enterprise of Imaginative Apologetics in the historic faith and makes it eminently useful for conservative, evangelical readers.

John Hughes takes an aggressive approach in the first essay, arguing that “the rationalist project of proofs has sold out the Christian faith to deism and turned the God of Jesus Christ into an idol of human reason” (p. 7) but also that “postmodernism is internally incoherent” (p. 9). His vision of apologetics is one that “engages with, criticizes and responds to the other views that are current in our world, and that is attractive and persuasive in itself” (p. 11). Davison follows with a challenge to what he calls the “myth of neutral reason” (p. 18) and its expression in arguments based on axioms such as the principle of non-contradiction.

Whether or not one entirely agrees with the arguments of Hughes and Davison, their critiques are a salutary shaking-up of ideas about what is effective in apologetics today. However, their arguments seem to assume readers' familiarity with the basic issues; those who know the work of cultural apologists such as Francis Schaeffer and Nancy Pearcey will appreciate this section, but many readers will wish for more development of the background issues. Fortunately, the key ideas are given a more carefully developed and significantly more nuanced approach in Michael Ward's essay in Part 2, and some of the necessary context for the first section is provided in Part 4.

The heart of Imaginative Apologetics is in Part 2, Christian Apologetics and the Human Imagination, which provides possible approaches to the challenge of doing apologetics differently. Alison Milbank considers literature and the visual arts as a way of engaging in a form of imaginative apologetics that will “shock people into engagement with reality” (p. 38). Donna Lazenby argues that the contemporary apologist must be able “to read the signs of the times” (p. 46). She considers a number of examples from literature, pointing out that these are “diagnostic spaces” where we can “discover . . . what people are spiritually hungering for” (p. 47).

It is no good arguing for 'God' or 'Christ' or for 'the atonement' or even for 'truth' until the apologist has shown, at least at some basic level, that these terms have real meaning. Otherwise they will just be counters in an intellectual game, leaving most readers cold. Likewise, apologetic arguments for the authority of 'the Church' or 'the Bible' or 'experience' or 'reason' itself, must all be imaginatively realized before they can begin to make traction on the reader's reason, let alone on the reader's will. (p. 72)

A serious consideration of imaginative apologetics thus includes a renewed vision of the way imagination and reason together facilitate the work of the Spirit on the human will.

The second half of Imaginative Apologetics is likely to be the most accessible to the working apologist. In Part 3, Being Imaginative about Christian Apologetics, Stephen Bullivant focuses on the ways that the imagination can help apologists engage with contemporary atheism, and Craig Hovey follows by setting forth a case for the ways in which Christian ethics can be seen as part of the apologetic enterprise, drawing usefully on the work of Alasdair MacIntyre.

Part 4, Situating Christian Apologetics, begins with Graham Ward's consideration of cultural hermeneutics, in which he argues that apologists must learn to read the “signs of the times” (p. 125); this piece pairs nicely with Lazenby's essay in Part 2. Richard Conrad provides a salutary overview of the history of apologetics from Pentecost to the present. Alister McGrath's essay on science and apologetics demonstrates that logical argument indeed has a place in imaginative apologetics. This final section would have been more effective as the book's first part; readers are recommended to read it out of order.

Imaginative Apologetics outlines a mode of engagement that has the potential to transform the discipline of apologetics. This relatively short book offers both conceptual insights and practical application, but its greatest value may be that it makes a powerful case for a new approach to apologetics that uses the imagination, allied with reason, to give a reason for our hope.