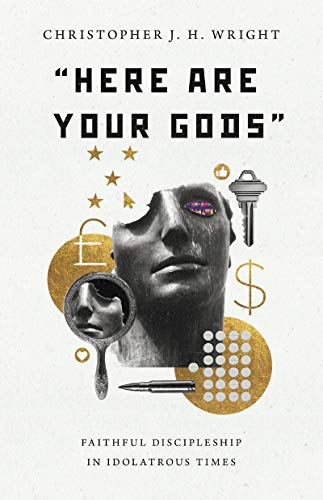 “Here Are Your Gods”: Faithful Discipleship in Idolatrous Times

What words would you use to describe life in the West in the 21st century? Overwhelming? Progressive? Polarizing? Full of outrage? While all these words may be true, in his latest book, Here Are Your Gods, Christopher J. H. Wright argues that modern Western society is characterized by one haunting word: idolatry. The average Western Christian may not describe their current cultural moment as idolatrous, which is precisely the problem that Wright is highlighting in this short but excellent book. Idolatry has sunk its teeth deep into our souls and, sadly, we are sometimes unable to see its debilitating effects.

But in a culture that is unfamiliar with the language of idolatry, how can we parse out both its definition and implications for Christians living—particularly in such a time as this?

In part 1 of the book, Wright takes up this challenge by asking two important questions. First, who is the Lord God? What is he like? What is his character? Is he distinct from the rest of the world? Second, what are the other “gods” mentioned in the Bible? Are they “something,” meaning, are they actually divine? Do they have power? In chapters 1 and 2, Wright addresses both of these questions. In relation to the “gods” mentioned in the Bible (separate from the Lord God), what exactly are they? On the one hand, statues and idols are real objects and thus are something. But on the other hand, if Yahweh alone is the only true God, statues are really nothing before him. So then, what are the “gods” the Bible often talks about? According to Wright’s thorough biblical excavation, the “gods” are objects that we form with our hands: “We are the makers of our own gods—which, of course, is part of the absurdity of worshipping them” (p. 30).

In part 2, Wright takes up the difficult challenge of confronting a particular poignant form of idolatry in the West: politics. While some may have hesitations regarding bringing the Bible to bear on politics, Wright admits that it is needed because “it exposes so much that we would prefer should stay hidden and even more that we may not have seen at all—such as the idols that dominate so much of our public and political life” (p. 68). In chapter 5, Wright traces the biblical and historical reality that kingdoms and nations rise and fall but the Lord God reigns forever. This sets the foundation for Wright to address the main idols of Western culture and politics in chapter 6.

The strength of chapter 6 is that Wright can provide helpful analysis and critique of American culture as an outsider to our system. If we allow it, Wright’s words will penetrate deeply into our souls, revealing the way that we, even as Christians, have succumbed to the idolatry of our times. At several moments, Wright is particularly pointed, such as when he argues that one of the main reasons for the “slow but accelerating collapse of Western civilization is the profoundly syncretistic and idolatrous nature of Western Christianity, combined with the idolatry of the culture that surrounds us” (p. 93). What are these idols that Western Christians fall prey to? According to Wright’s observations, they are three: the idol of prosperity, the idol of national pride, and the idol of self-exaltation.

In part 3, Wright concludes by providing a way forward for Christians to engage in the public sphere without succumbing to the idolatrous temptations of the day. Because of the highly influential nature of the idols today, we must therefore heed the wisdom of Joshua 24:15: “Choose for yourselves this day whom you will serve” (p. 109). Heeding this wisdom means that we will begin to radically center our lives around God, rather than on ourselves and the idols of our times. Moving forward as people centered on God, Wright argues that we must be “people shaped by the word of God, sharing in the mission of God, and living under the kingdom of God” (p. 111).

For those familiar with Wright’s previous books, you will find familiar themes in this latter section, such as his emphasis on the grand biblical narrative shaping our lives in the present. Drawing on the work of Craig G. Bartholomew and Michael W. Goheen (The Drama of Scripture: Finding Our Place in the Biblical Story, 2nd ed. [Grand Rapids: Baker Academic, 2014]), Wright proposes that the Bible is telling one story about the whole world, which is unfolding in seven acts. The way forward is to embody the biblical story through evangelism, justice, compassion, creation care, and biblical ethics. In his typical fashion, Wright compellingly calls the church to embrace a holistic biblical understanding of discipleship and mission that is much needed in our day.

The strength of this latest book is its brevity, clarity, and pointedness. In under 200 pages, Wright provides a biblical and cultural analysis of idolatry, a helpful critique of modern idolatry, and a way forward for the church to engage the world missionally. While so much of the modern missional movement has been about engagement with the culture (which Wright is definitely advocating at times), Here Are Your Gods provides a way to engage culture critically with biblical language, such as idolatry, and in a manner that is both winsome and nonjudgmental. As we name various activities as idolatrous, we join our heroes of the faith, such as John the Baptist, who named the idolatries of his own times. Wright shows us that commitment to God’s mission and strong language about cultural idolatry are not at odds with one another.

Pastors and church leaders would be wise to heed the insights of this book and begin to teach and live its principles and applications in their contexts. Without a doubt, we are living in tumultuous times that call for radical commitment to God and his mission in the world today. Wright’s latest book is a necessary page in the playbook of missional engagement in the twenty-first century.