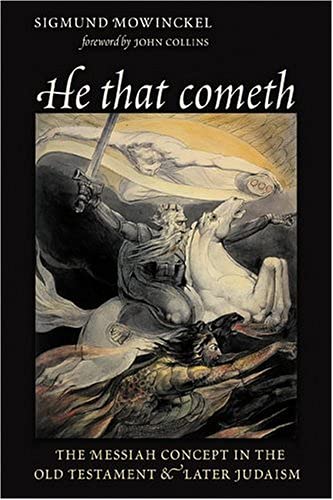 Students of messianism in the Bible, early Judaism, and Christianity, must welcome this new edition of Sigmund Mowinckel’s classic work, still one of the best comprehensive surveys of the subject available in print.

One of Mowinckel’s most distinctive methodological contributions is his quest for terminological precision. Reacting to wide encompassing uses of the term ‘messiah’ by authors such as Gressmann, he argues that this is a term originating in later Judaism that invariably denotes an eschatological figure, and should not be confused with the conception of the anointed king in Israelite royal ideology.

According to this view of the messiah as an eschatological figure, it is not possible to detect any messianism in the pre-exilic age. In other words, while there was a king, there was no expectation of an eschatological messiah. The exile marks the end of the rule of Israelite kings, and before then, instead of messianism we find the Israelite conceptions of the king and kingship. These conceptions are in their main features identical with the messianic ideal, and form its basis, but are not to be confused with it, because of the essentially eschatological character of messianism.

While the attempt to define messianism more precisely is very welcome, the negative side of Mowinckel’s approach is that it can be too restrictive and force texts into a pre-defines grid. In the light of the thesis outlines above, Mowinckel argues that all genuinely messianic passages are post-exilic. It is his view that pre-exilic oracles cannot be messianic in the strict sense, since they refer to the historical monarchy. The problem here is that of a possible petitio principii: Mowinckel’s argument depends on his specific dating of messianic texts, and his dating is often dependent on his preconceived framework of the development of messianism. He is aware of this difficulty and tries to address it, with limited success.

In many respects, He that Cometh needs updating. As the original Norwegian edition was published in 1951, there is obviously no engagement with the important developments in the study of messianism in the second half of the twentieth century—chiefly among which are the insights gained with the discovery and publication of the Dead Sea Scrolls. Also, much of Mowinckel’s treatment of certain oracles depends on views that can be seen, in the light of our present knowledge, as inadequate (cf., for instance, his identification of the ‘young woman’ of Isaiah 7 with the goddess Anat, and his explanation for the rationale behind the LXX rendering of the passage).

In spite of these problems, this is a very valuable book not only on the historical, but also on the theological level. For those interested in a Christian theology of messianism, Mowinckel offers stimulating insights. In fact, his work has been criticized on the grounds that it is coloured with a distinctively Christian approach. While this is in many ways true, it needs to be noted that Mowinckel is very conscious of making a distinction between his Old Testament sources and Christian theological tenets.

This new edition includes an excellent introduction by Prof. John J. Collins, of Yale University, situating the work in its historical context and highlighting its importance for the study of messianism. It also contains a selected updated bibliography on kingship and messianism. This volume in undoubtedly an indispensable resource.