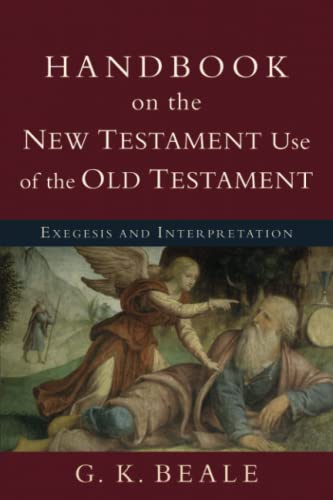 Handbook on the New Testament Use of the Old Testament: Exegesis and Interpretation

Chapter 1 introduces readers to various interpretive challenges and debates concerning the OT in the NT. The most significant question is whether the NT interprets the OT in line with its original meaning. Beale briefly summarizes and critiques the positions of Longenecker, Enns, and Stanley, who argue, for various reasons, that NT writers often do not cite the OT contextually. Beale notes the complexity of these issues but contends that NT authors do consistently cite the OT with an awareness of its wider literary context. He also reviews the long-standing debate over typology and concludes that biblical types include five essential elements: (1) analogical correspondence, (2) historicity, (3) foreshadowing, (4) escalation, and (5) retrospection (p. 14).

Chapter 2 defines key terms. “Quotation” is “a direct citation of an OT passage that is easily recognizable by its clear and unique verbal parallelism” (p. 29), and “allusion” is “a brief expression consciously intended by an author to be dependent on an OT passage” (p. 31). Beale suggests that the term “intertextuality” is fuzzy and sometimes confusing; he prefers to speak of “inner-biblical exegesis” or “allusion” (p. 40). Beale suggests that strong verbal, syntactical, and thematic parallels are of prime importance for seeing the OT in the NT.

Chapter 3 is, in Beale's words, “the core of the book” (p. 41). While there is no airtight method ensuring correct interpretations, Beale's approach is commendable for its rigorous examination of OT and NT texts in their literary and redemptive-historical contexts. He lays out nine steps to interpreting the NT use of the OT:

Beale briefly illustrates several of these steps in ch. 3 and offers extended discussion of steps 4, 5, and 7 in the next three chapters.

Chapter 4 discusses twelve different ways that NT authors employ the OT, with examples of each. Beale extensively examines the typological use of the OT (pp. 57-66), illustrated by numerous texts, including Matt 2:15 (Hos 11:1), John 13:18 (Ps 41:9), and John 19:36 (Exod 12:46 and Ps 34:20). He also devotes substantial attention to the “Use of an Old Testament Segment as a Blueprint or Prototype for a New Testament Segment” (pp. 80-89). Beale argues that Dan 7 serves as a framework for Rev 4-5, that Isa 49-55 provides the main conceptual substructure for Galatians (following Harmon), and that Rom 9:25-11:35 is organized around the OT theme of captivity-restoration.

Chapter 5 unfolds five key hermeneutical and theological presuppositions of NT authors that served as “an ever-present heuristic guide to the OT” (p. 98):

Beale claims that each of these presuppositions is rooted in the OT itself, though most examples are given in footnotes and not argued for in detail.

Chapter 6 discusses how and why to study the use of the OT in Jewish sources. Beale suggests approaching Jewish interpretations of the OT (especially from the Second Temple period) as ancient commentaries, which may offer insight into the way NT authors cite Scripture. This task entails three basic steps: (1) collect and study Jewish references to a specific OT text; (2) note trends or patterns in the Jewish employments of a given text; (3) compare Jewish and NT uses of the same OT text, which may be similar, different, or even antithetical (p. 103). Beale includes a helpful annotated bibliography to guide readers through the labyrinth of Jewish sources, and he illustrates his method by studying the “tongues of fire” in Acts 2 in light of its OT background and clarifying Jewish references (pp. 124-29).

Chapter 7 examines in detail the informal citation of Isa 22:22 in Rev 3:7 using Beale's nine-step approach that ch. 3 outlines. Beale masterfully unfolds the original context of Isa 22:22, which he claims develops Isa 9:6-7, and he demonstrates that John uses Isa 22:22 typologically to stress “that Jesus holds the power over salvation and judgment” (p. 141). The Handbook concludes with a select bibliography on NT use of the OT and author and text indices.

I offer three modest critiques of this useful, well-written book. First, Beale's argument in chapter 5 could be strengthened by comparing the interpretive presuppositions of NT authors to those of their Jewish contemporaries (from Qumran to Alexandria). As Darrell Bock observes, first-century Jews and Christians together affirmed corporate solidarity, typology, and Scripture's authority, but NT authors differed radically in their view of Jesus as the Messiah and the inaugurated fulfillment of Scripture in him (in Three Views on the New Testament Use of the Old Testament [ed. Berding and Lunde; Grand Rapids: Zondervan, 2007], p. 111).

Second, the chapters vary substantially in length, from 8 to 40 pages. Arguably the two most important chapters (3 and 5) in the Handbook are the shortest. The book comes to an abrupt end in ch. 7 and may have benefited from a brief conclusion that restates Beale's methodological approach and stresses the importance of careful study of the OT in the NT for the church, as well as the academy.

Third, while Beale discusses abundant examples of the OT in the NT, he focuses primarily on the Gospels and Acts, Paul, and Revelation (as one would expect). Given the importance of the OT in Hebrews and 1 Peter, it is somewhat surprising that these books do not feature more prominently in Beale's discussion. His bibliography includes 27 entries for Paul and 15 for Revelation, but only two entries for the General Epistles. Important additional studies of 1 Peter's use of the OT include those by Karen Jobes (“Got Milk? Septuagint Psalm 33 and the Interpretation of 1 Peter 2:1-3,”WTJ 63 [2002]: 1-14) and Gene Green (“The Use of the Old Testament for Christian Ethics in 1 Peter,” TynBul 41 [1990]: 276-89).

Numerous books and articles are published each year that explore the use of the OT in the NT, but Beale's Handbook stands out as a uniquely important and helpful contribution. This is the first book-length handbook written, not merely to expose readers to different views of the NT use of the OT, but to guide them step-by-step through the interpretive task itself. I can think of no one more suited than Professor Beale to write such a handbook, given his influential publications and respected teaching career at Gordon-Conwell Theological Seminary, Wheaton College, and Westminster Seminary.

In conclusion, the Handbook on the New Testament Use of the Old Testament is required reading for students, scholars, pastors, and others who are interested in studying the relationship of the OT and the NT. The Handbook serves as a fitting complement to the masterful volume, Commentary on the New Testament Use of the Old Testament. I plan to use the Handbook in the classroom, as a supplemental hermeneutics textbook and a staple text in elective courses on the NT use of the OT. In the important and complex issue of the NT's use of the OT, Beale has once again proved to be a reliable guide.

Brian Tabb is academic dean and associate professor of biblical studies at Bethlehem College & Seminary in Minneapolis, an elder of Bethlehem Baptist Church, and general
editor of Themelios.