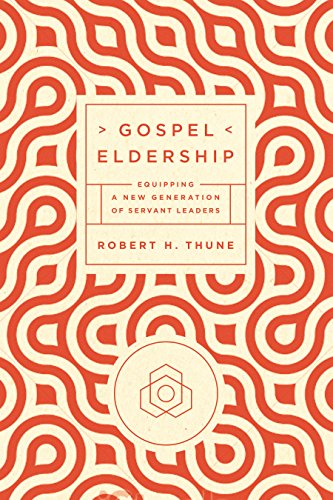 A friend is a senior executive in financial management, a tenured seminary professor, or a governor for a local public school; he’s also been a Christian many years. Presumably he is half way to joining the elder board.

Or is he? What does it mean to be an elder? What does it mean to serve as an elder? This recent manual by experienced pastor Bob Thune from Coram Deo Church in Omaha, NE sets to answer just those questions. He contends, “Eldership is the highest office of servant leadership in the church” (p. 124), and so sets out to provide a biblical informed, theologically grounded, spiritually enriching, and practically applied workbook to help equip current elders, would-be elders, and other interested Christians thinking through this crucial calling.

Thune’s starting point is that elders are to be pastors (citing the equivalence of the terms elder, pastor and bishop in Acts 20:17–18, 28 and 1 Pet 5:1–2); they are to be pace-setters (disciples who make disciple-makers; cf. 2 Tim 2:2); and they are to be male (Thune is unapologetically though generously complementarian). But his real interest in Gospel Eldership is to drill into his readers that “elders must be men who are grounded and rooted in the gospel. That is the crucial gap in many churches today, and that is the weakness that this book is designed to address” (p. 4, emphasis original). For while “many resources on church leadership seem consumed with church management, church structures, and church governance—as though the most important thing elders do is hold meetings and vote. Almost nothing has been written about the quality of spiritual life an elder must have as an elder” (p. 5, emphasis original).

Gospel Eldership is divided into two sections. Part one (chapters one to four) addresses what elders are. Part two (chapters five to ten) considers what elders do. Each chapter concludes with discussion questions (ideal for group interaction), and a practical exercise (for personal reflection and prayer).

Chapter one (Servant Leadership) asks whether “we look to the bookstore, the boardroom, or the blogosphere to learn about leadership? Mentors who have succeeded in the business world or led large ministries?” Rather, we should to look Jesus, the “most brilliant leadership expert ever. He knows more than the most successful CEO, the sharpest leadership consultant, the most compelling movement leader” (pp. 8–9). Unpacking Mark 10:35–45, potential elders need to be attuned to the cycle of leadership: aspiration → failure → grace → empowerment → aspiration, and so on (p. 13).

In chapter two, “A Biblical Approach to Leadership,” Thune compares various popular though flawed models of eldership (the “Anointed Leader” model, the “Ecclesiastical hierarchy” model, the “CEO/board” model) with the “Biblical” model: “the church is to be led by a plurality of called, qualified men known as elders” (p. 21).

Chapters three and four cover Thune’s three priorities of gospel elders: character, competence, and compatibility, which he maps onto John Frame’s triperspectivalism—the normative perspective (character), the situational perspective (competence) and the existential perspective (compatibility). Thune works through the well-known biblical qualification passages from 1 Timothy 3 and Titus 1, providing probing insights to assess oneself: “Don’t look at how you act on your best day. Rather, consider what you’re like under pressure: an exhausting day at work, an emotionally draining ministry situation, a fight with your spouse. And expect your church leaders to evaluate that you, not the ‘better version of yourself’ that you sometimes put forward” (p. 36).

In Part two, Thune delineates the responsibilities of eldership, using as his template Alexander Strauch’s taxonomy of feeding God’s flock (chapter five), leading God’s flock (chapter six), protecting God’s flock (chapter seven), caring for God’s flock (chapter eight), but also including functioning missionally (chapter nine). “Elders must be men of the Word. They must love, treasure, memorize and meditate on the Scriptures” (p. 60). Thune contends this must not just be for public ministry, but in private too, for “leaders who are lazy or lacking in their own spiritual disciplines will usually create churches that are long on style and short on substance—where methodology and pragmatism trump theology and formation. And such churches, despite the external appearance of success, usually produce spiritually malnourished people” (p. 62). Like King David in Psalm 78:72, they are to shepherd with integrity of heart, and with skillful hands (p. 69).

It’s hard to be critical of Gospel Eldership as it is by and large an excellent book. I wasn’t, however, totally convinced of Thune’s counsels to “listen to the Holy Spirit in prayer” (p. 38) as part of an elder’s spiritual formation, nor was I of his application of John 16:13, which he takes as Jesus’s promise to all Christians (“the Holy Spirit will guide you into all truth”) rather than primarily to the first apostles. Furthermore, in the chapter on caring for God’s flock I was left asking, Which sheep are the elders responsible for? The occasional attender? The committed church member? The non-Christian friend who comes once but never again? I would have liked at least an interaction with the concept of church membership, which for many provides a significant marker in identifying which sheep are the church elder’s first priority. In that regard, Thune’s book would helpfully be read alongside the recent work by Jeramie Rinne (Church Elders: How to Shepherd God’s People Like Jesus (Wheaton, IL: Crossway, 2014).

These are minor quibbles however, for overall Gospel Eldership is a very good resource. It is sound, biblical, applied and honest about the challenges of serving as an elder. The discussion questions and exercises for personal reflection make this an extremely usual manual for spiritual formation, which I hope will be used by many. Perhaps most formative of all is that each chapter exudes grace: rather than making the reader feel overwhelmed with the unbearable weight of eldership, Thune repeatedly and liberally applies the gospel to the various idolatries associated with Christian leadership.