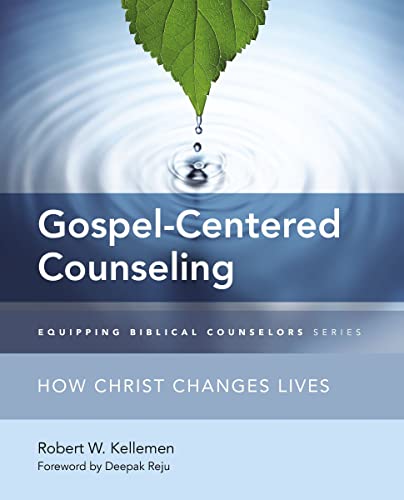 Let me state up front that I write as a self-confessed Christian psychologist who happily works in a biblical counseling department at a seminary, and I count Robert Kellemen a friend. Many readers will know that he has written a number of counseling books over the years and is a major leader in biblical counseling, having become the first director of the Biblical Counseling Coalition in 2010 (a position he has since resigned), so any book by him is important. This particular one is a major reformulation of his earlier book entitled “Soul Physician,” but it is so vastly re-written that it warrants a different title and feels like a different book. I might mention that his writing style is pedagogically creative, intended to engage the reader and communicate memorably through the use of catchy phrases, acronyms, alliteration, and figures of speech. Some will find this manner helpful, while others might be put off.

The overall structure of the book is similar to a standard evangelical systematic theology (with a few exceptions in the order), except that it is extremely practical, written to promote counseling practice based on such theology. As one might expect, the first chapter is about the role of the Bible in counseling, but Kellemen highlights its “gospel narrative” as the revealed context for making sense of human life and its restoration in Christ. The next chapter, more controversially, assesses the value of other sources of knowledge for biblical counseling (more on that below). The next two chapters are about God—on the Trinity and his character—followed by a chapter on spiritual warfare, which might seem out of place, but underscores the ultimate battle we find ourselves in and serves as preparation for the rest of the book, which unpacks the gospel narrative. That leads to discussions of the created nature of humanity (two chapters), human fallenness (three chapters: two on sin and one on suffering), and the redemption of Christ (two chapters on redemptive change, organized around “new nurture” and “new nature”). Kellemen adds a chapter on the role of the church in soul healing and another on our future eternal destiny. Perhaps surprisingly, the book concludes with a couple of chapters that revisit and expand considerably on the multifaceted nature of progressive sanctification.

A book entitled “Gospel-Centered Counseling” wants to make clear that the gospel, and not the fall, is paramount in the biblical counseling project, and this theme is sounded on every page. But it has many other strengths as well: its thorough reliance on Scripture; the attention given to the quality of the counseling relationship; the case examples, sensitively written, used to show how practice flows from theology; the rich and complex model of human nature that highlights created features of humanity not usually so emphasized in biblical counseling literature, e.g., personality, the emotions, the imagination, the value of self-awareness, embodiment, social embeddedness, and empathy. While personal sin is treated with utmost seriousness, he sees it as only half of what biblical counseling needs to address, the other half being suffering (p. 170). The bulk of the book, however, is focused on the amazing resources believers have in Christ for the healing and strengthening of their souls.

Many years ago David Powlison explained to me that there are two kinds of biblical counseling; I labeled them “traditional” and “progressive” in Foundations for Soul Care: A Christian Psychology Proposal (Downers Grove, IL: InterVarsity, 2007). With its emphasis more on creation and especially redemption, than on sin, this book exemplifies the “progressive” side of the spectrum.

There are only two interrelated areas where I had questions: the role of science and relations with other Christians. Basing his overall approach to psychology on Paul’s admonition in Colossians not to be taken captive to “hollow and deceptive philosophy, which depends on human traditions and the basic principles of this world rather than on Christ” (2:8), Kellemen rightly discourages the “blending” of a biblical worldview with a secular worldview (p. 37), and rejects the latter’s “prescriptive therapy” (p. 47), which is fundamentally religious, since it promotes human-centered soul healing apart from Christ. As a result, he says, we should avoid “spoiling the Egyptians”—i.e., borrowing therapeutic wisdom from them—but should instead “impact the Babylonians,” like the prophet Daniel did. “Paul warns us against integrating secular counseling with biblical counseling soul care” (p. 47).

He then offers an important, but subtle qualification by distinguishing the “prescriptive therapy” of secularists from their “descriptive research” (p. 47), which we should “embrace”: “science, research, and medicine . . . disciplines that examine God’s creation in obedience to the Creation mandate” (p. 48). He extols studies of the “mind/body connection” and even argues that psychotropic medications can be used legitimately by Christians, being a matter of Christian liberty, though he cautions against their abuse.

Some will say it is contradictory to embrace “descriptive research” but decry “integration” and “spoiling the Egyptians,” but I see this as an attempt to strike a careful, biblically-based balance regarding some very complex issues, for which I am grateful. But as I said, I do have some questions. If it is permissible to utilize descriptive research, why is so little cited in the book? Perhaps the answer is self-evident, since it is a book of counseling theology, and not on some aspect of human nature, like human development. But one might expect that such openness to descriptive research would lead to greater utilization of it, so long as it is clearly subordinated to Scripture. Furthermore, are there no areas of even prescriptive therapy that might be helpful for Christians, so long as it is interpreted Christianly, for example, therapy with developmentally-delayed children or those with an autism spectrum disorder?

Second, and more important, what does this position imply about our “integrationist” brothers and sisters, many of whom work in public mental health? Is their “integration” okay, so long as they stick to descriptive research, rather than prescriptive therapy? With Kellemen, I have reservations about the term “integration,” because what goes by that label today often does not involve much integration of relevant biblical and theological knowledge. I prefer the term “translation,” and its more radical connotations (see Foundations for Soul Care, ch. 7.). But if something akin to integration is okay, then maybe we can help those who use the term improve upon they claim to do. It was Augustine, after all, that early church champion of redemptive grace, who coined the phrase “spoiling the Egyptians” in his magisterial City of God. We desperately need to discuss such issues as a Christian counseling community, and biblical counseling has much to contribute to that conversation. But I suspect little progress will be made so long as those who are the most biblical and theological sharply distinguish themselves from those who “integrate,” and rarely cite them in their works. Is there nothing of benefit, at least descriptively, produced by other Christians in the counseling field? Are there unstated rules of “secondary separation” going on here that forbid citing those “outside the camp?” But if we wish to influence our brothers and sisters in Christ, we have to treat them as friends, and engage in mutual dialogue, listening and learning from them, as well as sharing, even if we disagree on exactly how much we can learn from secularists. Moreover, they just might have something valuable to contribute to our understanding of counseling, God’s creation, and of God’s broader purposes in the world, related to the Creation mandate.

So I pray that the biblical counseling movement continues to grow: in understanding how the Bible should ground Christian counseling; in gospel-centeredness; in a robust and complex doctrine of the Creation Mandate that enables believers to wisely and carefully embrace all the scientific truth given by God to his image-bearers; in a genuinely dialogical stance with Christians who are less biblical, but who have other strengths to share, so that the Christian counseling community as a whole can impact the church–and Babylon—with the kind of sound doctrine and wisdom and grace we find in this book.