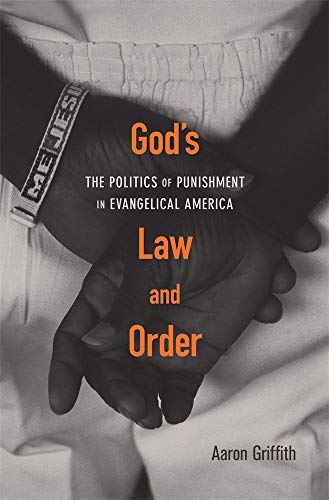 God’s Law and Order: The Politics of Punishment in Evangelical America

In God’s Law and Order: The Politics of Punishment in Evangelical America, Aaron Griffith, assistant professor of modern American history at Whitworth University, traces the intertwining stories of American evangelicalism and American formulations of crime and punishment. He describes a symbiotic relationship where American conservative Protestantism increasingly provided the penal system a broad and uncritical endorsement, and crime provided evangelicals a cohesive rallying point by which to anchor their morphing identity––“each facilitated the rise of the other” (p. 4). Further, he presents the paradoxical story of how evangelicals could be “complicit in the American justice system’s most grievous problems” while also functioning as “pioneers in humanitarian engagement with modern prison life” (p. 3).

Griffith begins in the late nineteenth and early twentieth centuries, including an examination of the horrific role of lynching in the Jim Crow social order. Approaching the 1920s and 1930s, crime was becoming a “broader issue of public concern” (p. 36). While conservative and moderate Protestants held contrasting diagnoses of increasing crime rates, they shared two influential beliefs that anticipated later conversations: (1) rising crime reflected increasing secularity, and (2) state influence was the best remedy to the problem (p. 39).

Griffith then turns to the ministry of Billy Graham. He argues that Graham (and the movements, leaders, and institutions that he sparked) focused on Christian conversion as the solution to juvenile delinquency. This was an important wrinkle distinct from later evangelical framing of crime and punishment: for evangelicals in these early postwar years, “the ideal outcome for criminals was their conversion, not conviction” (p. 57). Graham continued to elevate the danger of crime, but he pressed for heart change rather than harsher penal codes.

But this mindset changed in the 1960s and 1970s. Voices advocating for stronger law and order mechanisms (in light of still increasing crime rates) began to author legislation and cast a national vision for safer communities utilizing state force. Through media outlets (such as Christianity Today) and the platforming of conservative politicians, Evangelicals generally supported these efforts. According to Griffith, advocating for a stronger hand in the administration of law and order “helped to take evangelicalism public” (p. 167).

Simultaneous to evangelical activism on the outside, evangelical ministries proliferated on the inside to such an extent that “American prisons have not been the same since” (p. 175). I’ve volunteered with similar ministries (as has Griffith), and he captures the ethos of such groups exceedingly well with respect and appreciation as only a participant on the ground can describe. Griffith notes, however, that these ministries often unconsciously trafficked in faulty assumptions about the nature of crime and the shortcomings of the penal system, particularly in their avoidance of how race intersects with the criminal justice system. As Griffith argues, the “smoothing over of racial complications, however unintentional, was a regular theme of postwar evangelical crime concern,” a point illustrated by these groups (p. 5).

Griffith then turns to Prison Fellowship, Charles Colson, and the lasting influence of twentieth-century evangelicalism on contemporary prisons. As one would expect, Colson takes center stage, and Griffith explains how and why Colson had mixed success navigating the tensions of prison reform and the underlying cultural and social issues inherent in the conversation.

God’s Law and Order is a detailed interpretation of why evangelicals “possess deep comfort with the state’s capacity to surveil, constrain, and take life, even as they remain highly attuned to the spiritual well-being of those caught in the grips of the state system” (p. 11). Griffith provides a scholarly exposition of how evangelicals have understood crime and punishment and how they have mobilized (in ways helpful and unhelpful) to address the situation. Griffith demonstrates the connections between two spheres rarely discussed: American evangelicalism and the modern prison system. Readers see that there is more overlap than they may imagine.

I did leave with a nagging question related to Griffith’s presentation of evangelicals as uniquely “enmeshed” with the penal ecosystem (p. 9). The book argues their attentiveness to crime, justice, incarceration, and related policy. Griffith correctly notes that crime was not the only issue mobilizing evangelicals and that geopolitical concerns about Communism occasionally took precedence over the domestic pressures of crime and punishment. Still, having revisited a fair amount of the source material (including early CT issues), Griffith is right: evangelical outlets focused on crime to a greater extent than I realized. But, as Griffith shows, others beyond evangelicalism articulated these concerns on a grander scale, especially given the ever-increasing crime rates throughout the twentieth century. So did evangelicals pilot this enthusiasm for law and order, or did they simply ride a wave of wider cultural concern? If the latter, what made evangelical interest in these issues altogether different than the rest of the nation? I left with that question unresolved.

Of course, disagreements abound concerning policing, environmental factors vis-à-vis crime rates, and reasons for the disproportionate representation of people of color in prisons. Griffith’s book is not ultimately about solutions, though he does nudge readers toward suggested pathways forward. Readers who “feel the pull of law-and-order” will face more challenges absorbing and affirming some of his conclusions (p. 267). Still, Griffith is respectful toward those who share his concerns about poorly applied penalties, but who may offer alternative solutions that recognize the dignity of the incarcerated while maintaining an appropriate role for state disciplinary action. On such tension-laced topics, Griffith models how to write with clarity and winsomeness without sacrificing his argument.

God’s Law and Order is an illuminating examination of evangelical identity through the lenses of crime, punishment, justice, and redemption. Despite the numerous fractures in evangelicalism today, Griffith highlights a point of commonality: when it comes to serving prisoners and their families, “Evangelicals are the ones who show up” (p. 264).