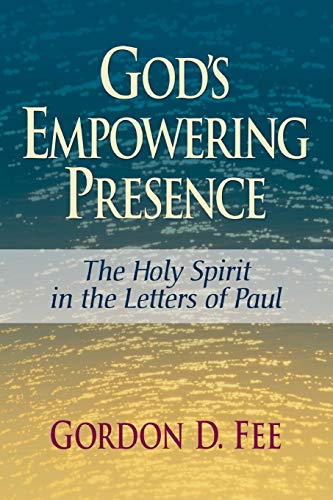 God’s Empowering Presence. The Holy Spirit in the Letters of Paul

Phrases such as tour de force and magnum opus come immediately to mind. Words like ‘comprehensive’ and ‘encyclopaedic’ also appropriately describe this monumental assessment of the place that the Holy Spirit has in Pauline theology. Fee, NT Professor at Regent College in Vancouver, begins with a section that introduces the topic and Paul’s uses of pneuma (spirit/Spirit) and accompanying terms in his letters. He proceeds (using 760 pages!) with his analysis, epistle by epistle—following his presumed chronology of Paul’s letter-writing career (Galatians follows the Corinthian letters)—of all the texts that treat Paul’s theology of the Spirit. By the way. Fee considers all the traditional Pauline corpus, including Ephesians and the Pastoral Epistles, to be genuinely Pauline and worthy of inclusion in a discussion of Paul’s theology. Part 11 consists of Fee’s synthesis of the results of his exegesis of the texts. It divides into sections on the Spirit’s role in Paul’s eschatology, his doctrine of God, his soteriology, and his ecclesiology. The book concludes with a chapter entitled, ‘Where to From Here? The Relevance of Pauline Pneumatology’.

The book’s preface and introductory pages introduce the reader to a scholar deeply committed to correcting the current deficiency in the modern church’s understanding of the proper role and ministry of the Holy Spirit, ‘but to do so as the result of exegetical labour’. That is, Fee intends to show by his analysis of Paul’s letters just how crucial, dynamic and experiential a role the Spirit had in Christianity’s foundational theologian’s life and thought. Fee is convinced that ‘for Paul the Spirit, as an experienced and living reality, was the absolutely crucial matter for Christian life, from begining to end’ (p. 1). The book’s title pointedly reflects, then, Fee’s bedrock convictions about Paul’s theology of the Spirit. The Spirit is a person who embodies the presence of God himself, a person who indwells and empowers God’s people in this present age. The book represents more than an exegetical exercise for the author. It is a sermon, a plea for renewal, an appeal for the contemporary church to return to its biblical roots in recognizing and appropriating the ministry of the Spirit in its life and work.

In a very enlightening lexical chapter, Fee studies articular and anarthrous uses of pneuma, distinctions between the divine Spirit and a human spirit, ‘spirit’ expressing a quality or attitude, adjectival uses translated as ‘spiritual’, and the term charisma, rendered ‘spiritual gift’. Several extremely important and significant conclusions emerge. Perhaps the most startling is the statement: ‘In fact, there is not a single instance in Paul where this word [spiritual] refers to the human “spirit” and has to do with “spiritual life”, as this word is most often understood in modern English’ (p. 32). For Paul, ‘spiritual’ speaks of the domain of God’s personal, Holy Spirit, not spiritual in the sense of ethereal or non-physical.

A review cannot assess in any responsible way the bulk of Fee’s 760 pages of exegesis of specific texts. Some formal observations might help potential readers understand the magnitude of what Fee has accomplished. Each chapter begins with a review of the major and significant commentaries on the letter, followed by other significant studies. He quotes each text for discussion, provides footnotes on text-critical matters, and proceeds with his analysis—virtually a commentary—of the verse or verses at issue. Each chapter ends with a conclusion that summarizes the specific teaching on the Spirit in that letter or group of letters. Fee is at his best in exegeting biblical texts. Though his sympathies clearly reside with promoting the role and place of the Spirit, he does not recoil from correcting misapplications, even when they challenge what he believes are ‘deeper life’ and ‘second blessing’ misuses of texts (as an example, see his treatment of 1 Cor. 2:6–3:2). As to tongues, Fee sees Paul promoting their private use ‘as much as one pleases’, but in the congregation only when it edifies the body (p. 151). An excursus defends in greater detail his view, originally presented in his commentary on 1 Corinthians (NICNT; Grand Rapids: Eerdmans, 1987) and subsequently challenged by various reviews (e.g. D.A. Carson, ‘ “Silent in the churches”: On the role of women in 1 Corinthians 14:33b–36’, in Recovering Biblical Manhood and Womanhood: A Response to Evangelical Feminism, ed. J. Piper and W.A. Grudem (Wheaton: Crossway, 1991), pp. 140–53), that 1 Corinthians 14:34–35 were not original to the letter, nor did they come from Paul at all.

Fee’s final synthetic chapter proceed from his concern to unleash the Spirit in the contemporary church, fighting the human proclivity to domesticate and channel the Spirit lest the Spirit challenge and subvert the structures of our settled ‘orthodoxy’ and comfortable traditions. Growing out of his understanding of the ‘centre’ in Paul’s theological system, Fee organizes his conclusions about the place of the Spirit around Paul’s four major thrusts:

The final chapter summarizes the book’s discoveries into eight conclusions. These statements describe how the Church’s leading foundational theologian and apostle understood the Spirit’s place. Fee follows this with a sobering, brief comparison to what we find in the Church today, and then a plea for a ‘way forward’. The plea is ‘for the recapturing of the Pauline perspective of Christan life as essentially the life of the Spirit, dynamically experienced and eschatologically oriented—but fully integrated into the life of the church’ (p. 901, his emphasis). And in contrast to those who wish to tear down or abandon present structures, Fee urges that believers work to breathe the life of the Spirit into our present institutions, theologies and liturgies. An appendix to the book considers Paul’s antecedents: the Spirit in the OT and developments during the inter-testamental period.

Though reviewers or readers might quibble here or there on individual point of exegesis, to do so here would be impertinent in view of what Fee has accomplished for us. The case is overwhelming. According to Paul, the Spirit has infused his presence and power into every individual Christian and the corporate body which is the Church. This is authentic and normal Christianity. But for many contemporary ‘Christians’ and ‘Churches’ the Spirit is either completely absent or viewed as an optional accessory to be summoned when needed, or, worse, a worrisome aberration. We stand chastened; we are brought up short, but not merely because an eloquent writer/preacher has made an impassioned appeal. Fee has demonstrated his case with the utmost exegetical rigour. This is no mere ad hominem entreaty. Fee has shown us in masterful strokes the true heart and vision of the apostle Paul—what is really true of those ‘in Christ’.