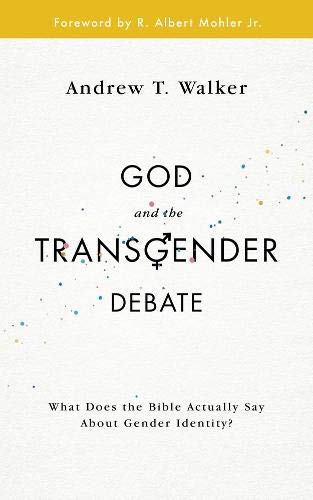 God and the Transgender Debate: What Does the Bible Actually Say About Gender Identity

Written by Andrew T. Walker Reviewed By Casey B. Hough
Ethics and Pastoralia

In God and the Transgender Debate (hereafter, GTD), Andrew Walker makes a compelling case for how Christians must engage in the debate over gender identity. Steeped in a deep reverence for and belief in the sufficiency of Scripture, Walker illustrates what thoughtful, compassionate, Christian engagement with a contemporary issue should look like in our culture.

GTD begins with a foreword from R. Albert Mohler, who situates the debate in the present culture before Walker introduces his audience to the Bible’s perspective on gender identity. The first chapter sets the tone for the work. Walker cares little about merely winning a debate about gender identity. Instead, God’s compassion as demonstrated in Jesus Christ motivates Walker’s book. If evangelicals win a debate while the souls of the broken are lost, Walker recognizes that nothing of eternal value is gained. Walker understands this dynamic well. He writes, “Using Jesus as my example and my guide, I hope to offer in this book a compassionate way forward; a way that is different and, I believe, offers greater hope than many of the other voices in this debate” (p. 18). Christ’s compassion compels Walker to enter the fray of transgender debate.

In chapter 2, readers find a helpful survey of the ideologies that precipitated the confusion of transgenderism. Transgenderism did not emerge in a vacuum. On the contrary, transgenderism is the heir of the sexual revolution, which was built on the foundation of relativism and radical individualism. With the decline of the Christian worldview in the public square, Walker notes that a gnostic worldview is shaping the culture. To equip the reader to engage with such a worldview in the transgender debate, Walker dedicates an entire chapter to defining terms. Chapter 3 is indispensable for those who are not well acquainted with the debate. Walker clarifies the difference between the following terms: sex, gender, gender identity, gender dysphoria, and transgender. There is also a glossary in the back of the book that defines several other terms in the debate. For the sake of clarity, chapter 3 alone is worth more than the price of the book. Walker returns to the topic of worldview in chapter 4. Following the guidance of James W. Sire’s book, The Universe Next Door, Walker explains that everyone has a worldview, even if they are not conscious of it. Three questions (p. 39) frame this important chapter: “Who has the right to tell me what to do? Who knows what is best for me to do? Who loves me and wants what is best for me?” These three questions of authority, knowledge, and trustworthiness structure the chapter.

A conscientious reader will recognize the gospel pattern of chapters 5 through 8. Chapter 5 guides the reader down the gospel road by starting with God’s good design in creation. Chapter 6 explores the effects of humanity’s rebellion against God. Although God’s good design for human gender is damaged by the fall of man, it is not destroyed. The goodness and beauty of gender persist, despite the brokenness that sin has brought into the world. At times, Walker notes, such brokenness will result in confusion and distortion of God’s intention for gender. An example of such brokenness is found in the experience of gender dysphoria. Walker states that, much like a struggle with same-sex attraction, the experience of gender dysphoria is not itself sinful. In other words, while gender dysphoria part of life in a broken world, where sin has infected everything to one degree or another, it is not a matter of personal sin. The liability for sin occurs when one embraces the gender that is contrary to their biological sex.

In chapter 7, Walker continues to walk his audience down the road of redemption by pointing to the day when all the brokenness is mended forever in Christ. Walker writes, “So the answer to the person struggling with gender dysphoria is the same as the person struggling with any other product of the fall—there is hope, there can be change, and there will one day be total transformation” (p. 90). In chapter 8, Walker addresses love for one’s neighbor. The question of what it mean to love one’s neighbor is vital for the transgender debate, and Walker gets to the heart of the issue. Just as he mentioned the importance of defining the source of authority in previous chapters, Walker highlights the importance of understanding love from a biblical perspective. If God is love, he must have the final say in defining the terms. Walker convincingly demonstrates that neighbor love will promote dignity, express empathy, share truth, produce compassion, and be patient, especially with those who are living contrary to God’s Word. Love does not require an affirmation of destructive behavior. In fact, such an affirmation would be the complete opposite of love. Hence, Christians cannot proceed in this debate without a clear, biblical understanding of love as defined by God.

Chapter 9 focuses the reader’s attention on what it will mean to follow Jesus as someone who struggles with same-sex attraction and gender dysphoria. The embrace of these fallen affections is not a Christian option. Repentance instead of capitulation to sinful desire is necessary for following Jesus. In Chapter 10, Walker considers how the church can respond to the current challenges of the transgender debate with compassionate, gracious, convictional, patient, attentive gospel ministry. Chapter 11 attempts to offer guidance for parents and children navigating transgender issues, and Chapter 12 answers a series of difficult questions related to the transgender debate. In chapter 13, Walker concludes where he began, offering the hope found in Christ’s outstretched hands.

GTD serves as an excellent introduction to the crucial issue of gender identity. This book is imminently accessible without being simplistic. Walker wrestles with the issues in a fair manner that reflects mature, compassionate and critical thinking. My only caution is for the reader who would dare to wade into the transgender debate without taking the time to digest Walker’s careful argument. GTD is not a handbook for how to win a cultural debate. Instead, GTD is a guide for understanding how the gospel of Christ is relevant and sufficient for the current discussion about gender in the church and the world. Do not forget your own need for Christ as you seek to help others find him. Walker is a good and faithful guide in this discussion. Read this book carefully and thoughtfully as you seek to imitate Christ in this debate.