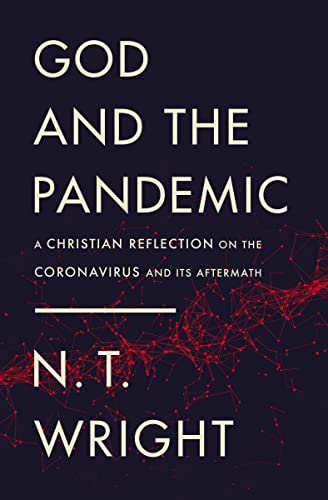 God and the Pandemic: A Christian Reflection on the Coronavirus and Its Aftermath

N. T. Wright is a research professor of New Testament and Early Christianity at the University of St. Andrews and senior research fellow at Wycliffe Hall, Oxford. In God and the Pandemic, Wright aims to help his readers to avoid a reactionary response to “questions raised by the pandemic” (p. xi). Instead, he prods us to pause, pray and lament in search of “solutions.”

In the book’s opening chapter, Wright entertains the question that everyone is asking regarding the pandemic: “Why?” He notes that in the past, people have tried to answer the “why?” in three different ways when faced with pandemic-like calamities: it is predestined (Stoicism); it is random (Epicureanism); and “the present life is just a shadow of reality” (Platonism) (p. 2). Similarly, in response to COVID-19, some blame China or America and others are promulgating the idea that it is the end of the world. Wright singles out the Platonic response to the pandemic as one that has often deluded Christians but, in fact, misconstrues the Bible and “is simply escapist” (p. 24). Others are taking the pandemic as a kairos moment for the evangelization of non-Christians. Others still, by gleaning from some Old Testament passages, believe that the pandemic is a sign that God “is angry with us for some reason” (p. 6).

In chapter 2, Wright then turns his attention to the Old Testament, focusing on the fact that the Babylonian exile came upon Israel as a result of idolatry. Thus, sin caused exile. At the same time, calamity also happened to individuals who had not necessarily sinned or disobeyed God, Job being a prime example. Wright argues that events like coronavirus make it clear that one’s piety does not prevent disaster from occurring in Christians’ lives.

In chapter 3, Wright contends that Jesus—according to the Gospels—was not so much looking “backward to sins which might bring about judgment, but forward to the new thing that was happening: the kingdom of God” (p. 16). Moreover, given that Jesus is the final prophet through whom God has spoken, the son sent to the vineyard to call the tenants to account, “there can be no other signs, no other warning events, to compare with this one” (p. 22). Those who reject this fact, Wright argues, end up with an erroneous interpretation of the Bible—one that “screens Jesus out of the picture” (p. 20). He also claims that many western Christians tend to divorce God’s sovereignty from Christ’s atonement. His point is this: “If you want to know what it means to talk about God being ‘in charge of’ the world, or being ‘in control’, or being ‘sovereign’, then Jesus himself instructs you to rethink the notion of ‘kingdom’, ‘control’ and ‘sovereignty’ themselves, around his death on the cross” (p. 25, italics original).

In the following chapter, Wright further argues that the New Testament does not associate calamities like famine with the signs of Jesus’s second coming or use them to call people to repent of their sin to avert disaster. “Jesus himself is the reason why people should turn from idolatry, injustice and all wickedness” (p. 20). Rather, when faced with such calamities, the early church put its energy into assisting those at risk by meeting their needs. For example, following Agabus’s prediction of a great famine coming upon the whole world (Acts 11), the early church engaged in identifying those in need and sent help to Jerusalem instead of blaming others or telling those at risk to repent of their sins.

Gleaning from Romans 8, Wright proposes that the church should see its vocation as one of praying as she groans with the rest of creation. This prayer, Wright posits, should perhaps be wordless as the Spirit is in times like a global pandemic. Indeed, for him the “redefinition of ‘control’, of ‘kingdom’, of ‘sovereignty’, which we find in the rest of the New Testament and particularly with Jesus himself, here reaches its true depth” (p. 45).

In the book’s final chapter, Wright maintains that precisely because we are living through “a time of acute crisis,” this is not a time for reading the riot act; rather, “this is a time for lament” (p. 53). Like Jesus and the early Christians, we need to attend to the victims of the pandemic. In other words, lament should be followed by action, emulating, for instance, the pattern of response outlined in Psalm 72 (p. 73).

Wright’s brief book is timely as the global church is scrambling to make sense of the global pandemic. The main strength of this book is the advice to Christians to avoid simplistic “knee-jerk reactions” to explain the reason for the coronavirus pandemic. He urges the church to adopt a lament and prayer stance as our primary response to the pandemic and then to go out and help those at risk.

Although Wright is correct that “wordless prayer” and meeting physical needs are essential, he seems to downplay the place of verbal proclamation. He does not explicitly deny the necessity of evangelism. However, in reaction to those who do it badly, he appears to believe that silence is the better way. However, at some point Christians needs to explain why they are showing mercy and compassion, whether in hospices or homeless shelters. The verbal utterance of the gospel is vital as there is a far worse danger afoot than COVID-19—dying without a relationship with Jesus. Curiously, the only time that Wright seems to encourage believers to speak during the pandemic is to Western leaders (p. 71).

Nonetheless, God and the Pandemic should be commended for its attempt to correct those who “make the basic theological mistake of trying to deduce something about God while going behind Jesus’ back” (p. 22), those who attempt to profit from end times entrepreneurship and those who do not care for the whole person.