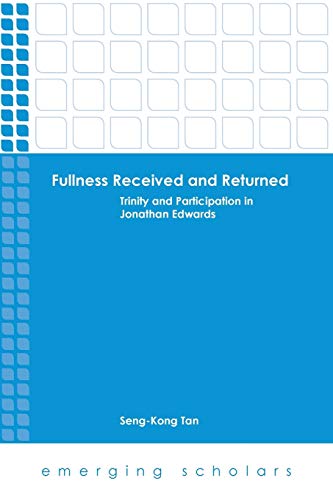 Fullness Received and Returned: Trinity and Participation in Jonathan Edwards

Seng-Kong Tan has produced one of the latest volumes in the “Emerging Scholars” series, the new dissertation line by Fortress Press. Tan completed his dissertation at Princeton under George Hunsinger. This is now the fourth book in the past three years seeking to provide a theological analysis of one of Edwards’s most fundamental doctrines. What Tan hopes to accomplish with this volume is to reveal the contours of Edwards’s Trinitarian theology through the emanation-remanation (exitus-reditus) motif in his thought. In doing so, Tan sets out to provide a theological orientation to Edwards’s thought in parallel to Sang Hyun Lee’s more philosophical development.

Tan develops the structure of the emanation-remanation schema in Edwards’s doctrine of God, and then shows how this development gives him the contours for God’s economic activity. The bulk of Tan’s exposition focuses on Christology, where he addresses the hypostatic union, communicable attributes, and union with Christ, turning, at that point, to the Spirit specifically where he focuses in on the notion of participation in Edwards’s thought. Throughout this volume, Tan addresses the intricacies of Edwards’s Trinitarian thought, revealing how Edwards’s analysis of Theology Proper unfolds into the economy where his theology of participation takes on the Trinitarian contours noted above. This participation is advanced through the categories of “grace” and [divine] “nature,” with a particular focus on the communicable attributes of the Spirit.

Tan’s work is provocative at parts, seeks to place Edwards broadly in the tradition, and is an attempt to orient the broad movement of Edwards’s theological analysis. These are all, certainly, positives for a monograph, especially one on Edwards. Tan attends to several key aspects of Edwards’s doctrine of God that have been either ignored, or not adequately developed prior to his work. Furthermore, throughout the volume there are engagements with the tradition, showing Edwards to be addressing fundamental questions of the Church that his forebears meditated upon before him. That said, there are several major drawbacks to the volume that I outline here.

First, Tan’s reading of Edwards is a-historical. This should not be taken to mean that he fails to interact with Edwards’s context, he certainly does. But, in a move like Sang Lee, Tan reads Edwards’s variegated corpus as if it is one established system of thought. There is no weighing between the genres of Edwards’s work (i.e., between his sermons, published works, and notebook entries), nor is there a real sense of discernment in the progression of his thought. There has been a lot of work done on this already within the field, so there is no really good reason for neglecting it. But this neglect leads to my second frustration. Tan could have avoided many of the downfalls of this volume by interacting with more Edwards scholars and less of the tradition. It is unclear how helpful it is to provide random comparisons all across the tradition with no obvious upside for the volume itself (minus the point I made above). Rather than serving the volume by helping to highlight Edwards’s view, these forays into the tradition read like the real purpose of the book itself. In other words, this book reads as an exercise in proving one’s knowledge of the tradition and obscure Latin technical terms rather than an exercise in Edwards’s systematic thought. As a clear example, the endnotes are longer than the actual chapters, some of which double the chapter in size (the vast bulk of which add nothing to the actual argument). As a dissertation, it is understandable that a student would use the endnotes to prove his ability to interpret broadly in the tradition, but as a published monograph it is gratuitous and unhelpful. It would have proven much more useful to have chosen two or three key figures to compare Edwards’s view against (e.g., Augustine, Aquinas and Owen), where lines of continuity and contrast could have been brought into the text at times, but as it stands, the comparisons read as random points of arbitrary contact.

Third, and this is more specifically related to being a book about Edwards, it is frustrating that Tan seems to ignore, for the most part, the secondary literature on Edwards. This is particularly true with the literature that has been published in the last five years, much of which relate directly to his work. But even beyond that, one is left wondering how Tan’s project relates to other, similar projects within Edwards studies. There are a handful of helpful engagements with other positions in the field, and Tan’s own observations are helpful in that regard, but there are simply too few of these throughout the book. In the past several years there have been three other volumes that cover almost identical ground to Tan’s (even though they had differing objectives): Oliver Crisp’s, Jonathan Edwards on God and Creation (Oxford: OUP, 2012); William Schweitzer’s, God Is a Communicative Being: Divine Communicativeness and Harmony in the Theology of Jonathan Edwards (London: Bloomsbury, 2013); and my Jonathan Edwards’s Theology: A Reinterpretation (London: Bloomsbury, 2012). By choosing to focus on the tradition rather than the field of Edwards scholars, Tan’s work is somewhat aloof to insights that would have proven helpful.

These three downfalls make Tan’s book difficult to recommend. There are simply too many points where it is unclear if a particular view is Edwards’s mature view, because Tan does not bother to weigh the corpus. Where there should be an engagement with other views in the secondary literature, the reader almost always finds an engagement with conversation partners that add little to the argument. Rather than comparing Edwards with conversation partners he did not have, over issues he was unaware of, it would have proved much more fruitful to compare his own reading against the secondary literature (and against the development of Edwards’s thought). Overall, therefore, this will be a helpful volume for Edwards scholars to utilize to compare their own doctrinal analysis of Edwards’s writings. For students new to Edwards’s thought, there are too many other volumes that do not fail at these points that would prove more helpful.