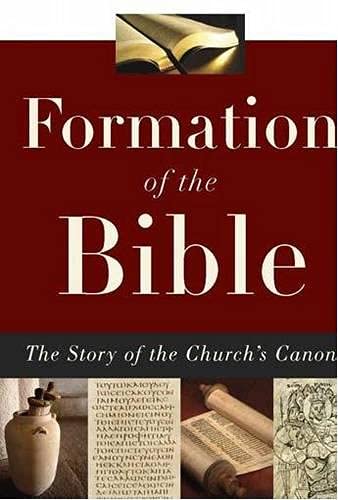 Formation of the Bible: The Story of the Church’s Canon

I have enjoyed reading Lee McDonald's many works on the NT canon. He has established himself as one of the leading voices in this area through his numerous books and articles. So I was pleased to see this latest volume, which is intended to be a lay-level introduction to the origins of the Bible. There are very few introductory works on this subject matter (a point McDonald makes in the preface), so it is good to see something written for the person in the pew.

After an introductory chapter on “What is the Bible?”, McDonald divides the volume into approximately two halves with three chapters covering the story of the OT and three the NT. Throughout these chapters, he lays out all the standard historical facts about the development of these books, along with many charts, maps, and pictures. And he is quite thorough. Despite the fact that this volume is intended for a lay audience, it is thick with the relevant historical data.

As McDonald discusses the historical details, he is quite willing to lay (aspects of) his theological views on the table. He openly acknowledges the Bible as “word of God” (p. xi) and that it is “sacred and authoritative Scripture” (p. 17). He also offers a bit of an apologetic motive for his book when he says, “Given the current skepticism of many contemporary scholars about the origin of the Bible and its faith claims, it is important to answer recent challenges to the Bible and to aid those who recognize the Bible as a sacred book, but who do not regularly deal with its origins” (p. xi). So, on the one hand, it seems that McDonald is out to defend the authority of the Bible to the layman who may not be aware of the complex scholarly issues. I appreciate this dimension of his book and find it commendable.

However, on the other hand, it seems that the book runs into a number of problems when McDonald actually starts sifting through the historical evidence. Although most of the evidence McDonald reviews is fairly routine, there are a number of areas where the historical analysis proves to be problematic. Most of these issues arise in two main areas:

1. The Significance of Biblical Citations for Establishing the Canon. One of the main ways that we know whether an ancient author considered a book to be canonical is the manner in which he cited the book. If an ancient author explicitly referred to a writing as “Scripture” or used a standard introductory formula (e.g., “it is written”), then we have good grounds for thinking that the author regarded the book as having divine authority. However, it is important to recognize that ancient authors frequently used, cited, and appealed to books that were not necessarily part of their scriptural collection. In other words, mere use does not establish a book's canonicity.

McDonald rightly recognizes this principle and goes out of his way to make it plain (p. 27). The problem, however, is that this principle does not seem to be consistently followed throughout the volume. For instance, in the discussion of the canon of the Qumran community, McDonald observes that many non-biblical texts were also found in the caves by the Dead Sea. Then, he argues, “The presence of many non-biblical books at Qumran, some of which may date from the late fourth century BC, suggests that the matter of the scope of the Jewish Scriptures was not settled in the time of Jesus” (p. 43). But how does the mere “presence” of other books in the Qumran library prove this? Sure, the presence of these books shows that they were used by the Qumran community. But as just discussed, mere use does not demonstrate that they possessed scriptural authority. Indeed, if one were to find a modern theological library buried in the sand a thousand years from now, it would contain more than just biblical books, but many other kinds of books as well. But this cannot be used as evidence that these books were all considered canonical.

This same issue comes up again when McDonald examines which books Jesus and his disciples considered scriptural (as witnessed in the NT writings). In an effort to show that there was no fixed canon during this time, he mentions, “Some of Jesus' teachings have parallels in certain non-biblical books” (p. 56). McDonald makes the same argument when it comes to Jesus' disciples. He argues there was no fixed canon because Jesus' disciples “often cite other religious texts not in the Hebrew Bible” (p. 56). But again, how do these instances prove that there was no fixed canon? McDonald passes over the fact that Jesus and his disciples never refer to any of these non-biblical books as Scripture (Jude notwithstanding). Mere use of a book does not demonstrate that it has canonical status.

2. The Nature of Early Christian Book Production. I appreciate that McDonald spends a significant amount of time on the NT manuscripts themselves and what they can tell us about the origins of the canon-an area often overlooked in prior studies. However, there are also a number of concerns about the presentation of the data in this section.

First, McDonald regularly presents the earliest manuscripts as “poor in quality with many mistakes in them” (p. 122) and presents the scribes as “amateur copiers and not professional” (pp. 122-23). However, this is not quite an accurate presentation of the literary culture of early Christianity. While we would certainly agree that some Christian scribes were amateurs who produced a low-quality product, there are no reasons to think all Christian scribes were this way. In fact, when we look at the earliest NT manuscripts, a significant number of them have a high quality scribal hand, typical of those who have been trained to write and copy books. In fact, in Graham Stanton's recent study on this question, he has shown that we have numerous early papyri written with professional book hands and “made with great skill and at some expense” (Jesus and Gospel [Cambridge University Press, 2004], pp. 192-206). Thus, it would be more accurate to characterize the quality of early Christian scribes as mixed-some were low quality, some average quality, and some high quality.

Second, McDonald addresses the special scribal abbreviations called the nomina sacra. While most scholars have considered these abbreviations as indicative of impressive scribal cooperation and organization, McDonald, surprisingly, sees them as indicative of the opposite, namely, that the scribes were unprofessional and “not conscious of copying literary, sacred texts” (p. 123). On what basis does McDonald make this claim? He does so on the basis that “abbreviations were not generally made in standard books or scrolls of a literary quality” (p. 123). But to compare the nomina sacra to standard scribal abbreviations is to seriously miss what the nomina sacra are. They were not created to save space but to show honor to the name of God and Christ. In other words, the nomina sacra were more about religious devotion than about punctuation. In this way, they were quite similar to the Tetragrammaton-the special writing of the divine name in the OT books. Surely, McDonald would not suggest that the existence of the Tetragrammaton is an indication of low scribal quality and a belief that those books were not Scripture. For these reasons, John Barton has made the opposite point of McDonald and has argued, “the existence of the nomina sacra indicates that for Christians as for Jews there were features of the text as a physical object that were used to express its sacredness” (The Spirit and the Letter: Studies in the Biblical Canon [SPCK, 1997], p. 123).

Third, when McDonald addresses the state of the earliest Christian papyri, there are additional problems in the presentation of the evidence. He indicates, “there are only two known manuscripts of the New Testament from the second century” (p. 137). But again, this is not the whole story. Manuscripts are often given dates in a range (usually about fifty years), and McDonald has chosen only the upper portion of that range. If one considers the whole range, then numerous manuscripts could fall into the second century (e.g., P104, P4-64-67, P77, P103, P75, P66, P46, P52, P90). In addition, when talking about the NT papyri, McDonald argues, “some contain New Testament books alongside the non-biblical books” (pp. 125-26). It seems that he raises this point to show that there was canonical diversity amongst early Christians. As an example, he mentions P72 where 1 and 2 Peter occur alongside some extrabiblical books. But he never mentions that this is the only example of this phenomenon amongst the papyri! There are not “some” papyri that do this, but only one. P72 is not the norm, but the exception.

In sum, this volume has a number of positive features as it covers a variety of complex historical topics for the layman, but it also runs into some difficulties as it evaluates some of the historical evidence. The repeated theme of the book, to which McDonald regularly returns, is that of canonical diversity. He seems intent to show that there was no fixed canon at an early point and that there was significant disagreement over these books. While this is partially true, the arguments of the book could be more nuanced and rounded out in the ways that I indicate above.

Nevertheless, McDonald has provided a positive contribution to the field of canonical studies and a helpful introduction for a lay audience. And I particularly appreciate the way he ends the book. Regardless of all the complexities of the canonical process, argues McDonald, we still must ask the most important question of whether we are willing to follow the canon: “We do not have a biblical canon unless we are willing to follow its guidelines for ordering our lives” (p. 161). Thus, McDonald rightly reminds us that the most important issue regarding the canon is not academic, but practical. The canon is not just something to investigate but something to obey.