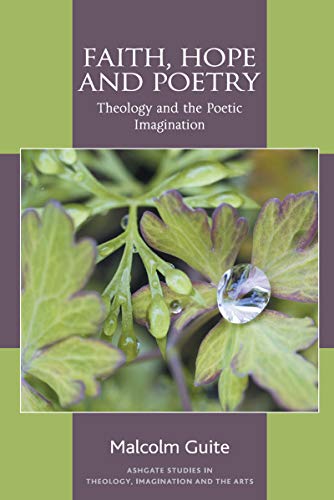 Faith, Hope, and Poetry: Theology and the Poetic Imagination

Adding to a growing number of voices charging the Christian faith to see its calling as the manifestation of a distinctly “poetic imagination” is Malcolm Guite’s Faith, Hope and Poetry: Theology and the Poetic Imagination. What makes Guite’s work striking is his claim that poetry has the capacity to redress our post-Enlightenment reductivism by offering not merely an illustrative assist, but rather a “transformed vision,” with poetry being a carrier of a type of knowledge in its own right. To support his claim, Guite provides a close reading of some of the richest theological poetry in the English language, from the seventh century Old English verse found in The Dream of the Rood, to the contemporary work of Nobel Prize winner Seamus Heaney. Those along for the ride are to be rewarded with an immensely rich and vivid account of poetry as an essential source of Christian truth.

After an introduction that presents the problem (a split between reason and imagination) and his proposed solution (the poetic imagination), the first chapter explores the poetic inculturation of the Christian faith in the Norse dream-poetry of The Dream of The Rood. Appealing to the conversion of C. S. Lewis, Guite argues that the same exercise of poetic imagination is necessary for contemporary faith. In the second chapter, Guite takes up the famous dialogue of Theseus and Hippolyta in Shakespeare’s A Midsummer Night’s Dream and Prospero’s speech in The Tempest to evince the critical role imagination plays in accounting for life’s mysteries. Continuing with this discussion, the third chapter offers a close reading of Sir John Davies’s two great poems, Orchestra and Nosce Teipsum. These poems display the genre’s power to magnify our understanding of the world. Following this, chapter four introduces John Donne and George Herbert as figures who exemplify the “double vision” that the poetic imagination affords. In turn, chapter five traces the yearnings for illumination beyond human blindness in the works of Henry Vaughan and John Milton. This brings the reader to a watershed in Guite’s argument, chapter six, where he elucidates Samuel Taylor Coleridge’s mid-Enlightenment counter-attack on the split between reason and imagination. The seventh chapter offers additional back-door support to Guite’s thesis; even the poems by modern skeptics like Thomas Hardy, Philip Larkin, and Geoffrey Hill can’t help but bear witness to poetry’s transfiguring light. Finally, the last and largest chapter (ch. 8) exposits the poetry of a current exemplar of the poetic imagination: Irish Catholic poet Seamus Heaney.

As is demonstrated above, Guite’s selection of poetry is driven by a desire to unearth what he sees as an ongoing poetic tradition cutting across both historic periods and poetic genres. Yet not all players in this tradition deserve equal weight. Because of Enlightenment and postmodern challenges, Guite holds the work of Coleridge (breaking the Enlightenment paradigm) and the contemporary poetry of Heaney (postmodern exemplar) as particularly vital. Regarding the former, Guite draws attention to Coleridge’s work with the nature and the meaning of symbols to offer a link between the inner world of signs and a sign-filled world. Arguing for an “organic” conception of nature in the face of a cold, mechanistic view, Coleridge linked the poet’s imagination with the (capital “I”) Imagination that formed a (therefore) sign-filled world. In a fascinating twist on the Augustinian doctrine of illumination, Coleridge argued it was not the inner light of reason, but the (divine) gift of imagination by which “natural beauty becomes a revelation of truth” (p. 177). Similarly, Guite draws out Seamus Heaney’s imaginative contemplation of the particularities of surfaces and his ability to connect these to something beyond themselves. Once again, it is “the redemptive reordering of the human imagination” (p. 224) which can connect the inner realities of the poet with the Source of all imagination. Or to put another way, Heaney sees the poetic act itself as displacing “the despotism of the eye” by which we might glimpse “all things . . . luminous with the light of God” (p. 242).

Although not above critique, Guite’s incisive and enthusiastic readings of these poets further support his argument that the suspiciously critical dissecting characteristic of post-Enlightenment hermeneutics misses out on the richness that is afforded by imagination. What’s more, Guite’s expansive vision calling for a reunion of reason and imagination (as Mary Midgely, Richard Holmes, and others have recently argued) is compelling; science neither can nor should be hermetically sealed from the symbolic and metaphoric elements of language. Possibly most compelling, however, is Guite’s christological/anthropological link via the imagination: “If part of the Imago Dei is itself our creative imagination then we should expect the action of the Word, indwelling and redeeming fallen humanity, to begin in and work outward through the human imagination” (p. 14). On this point, those from a wide variety of theological positions—though possibly not ready to follow all the implications of Coleridge’s (and Lewis’s) Neo-platonic doctrine of signs (i.e., going beyond creation to truth rather than creation being the nexus of truth)—can recognize that Guite has ascertained something that is not merely native to Romanticism, but rather is essential to Christian theology itself. Indeed, if it can be shown that the poetic imagination can work not only among English-speaking white poets of the Anglican/Catholic tradition but also can be transcribed into numerous Christian traditions (cf. Regina Schwartz, Sacramental Poetics at the Dawn of Secularism), then Guite’s Faith, Hope and Poetry: Theology and the Poetic Imagination should be read as not merely a delightful glimpse into a particular strain of poetry, but also as a clarion call for all Christian theologians to reclaim an essential way of knowing Christian truth.