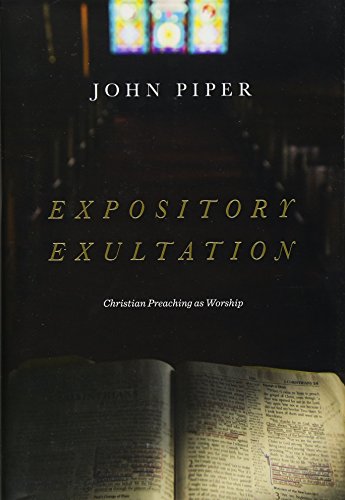 John Piper is the founder and teacher of desiringGod.org and the chancellor of Bethlehem College & Seminary. He previously served for thirty-four years as the senior pastor of Bethlehem Baptist Church Minneapolis, Minnesota. He is the author of more than fifty books. This volume is the third in a trilogy of books (including A Peculiar Glory [2016] and Reading the Bible Supernaturally [2017]). This volume is written for pastors and those training for the pastorate.

The book, in accordance with its title, seeks to demonstrate that “preaching itself is worship and is appointed by God to awaken and intensify worship” (p. 51). This doxological orientation is explained and justified biblically and theologically. As is to be expected of Piper’s writing, his familiar thesis that God is most glorified in us when we are most satisfied in him is applied to the task of preaching. The topic is addressed in seven parts, each demonstrating a careful line of argument that flows into the parts that follow.

In the first part, “A Setting for Preaching,” Piper gives a theological explanation of worship and justification for considering church as a “corporate worship.” In the second part, he explains his description of preaching as “expository exultation” through an exploration of the biblical language used for preaching, and the “fittingness” for preaching to the church context. With the lexical study, Piper includes a sampling of preaching in biblical history, as well as a theological depiction of the appropriateness of preaching in correlation to the nature of God. His chapter on the Trinity (ch. 5) draws heavily on Jonathan Edward’s essay on the Trinity.

In the third and fourth parts, Piper considers in turn both the supernatural work of preaching, and the natural powers employed in that work. The contrast and balance of these two sections is handled very well, cautioning that rhetoric won’t achieve spiritual change, but also that preachers should make every effort to expend their natural powers in the cause of preaching. Piper contends for a compatibilism that does not set God’s illumination and human effort at odds with each other. Integral to this argument is an exploration of “eloquence” in the Corinthian context. In these sections, there are two practical sections serving the respective topics of the supernatural (pp. 109–19) and natural in preaching (pp. 149–55).

In the final three parts of the book, Piper provides an examination of how the preacher ought to handle and proclaim the text. In section five, the focus is on the need for preachers to show their hearers the text of Scripture. In section six, Piper moves to demonstrate that textual constraint is necessary but not adequate in the pulpit, as there are often bigger theological issues impinging on the near context of Scripture. He sets forth three dominant themes that frame “reality” (a constant focus for the last three sections). These themes correspond to the persons of the Godhead: God’s glory as the ultimate focus of the Bible (goal), Christ’s crucifixion as the guarantor of every promise in Scripture (ground), and the Holy Spirit as the enabler of the transformed life leading to salvation (means). Each theme is defined clearly and demonstrated scripturally. Along with this descriptive work, there is an imperative for the preacher to maintain an emphasis on each of these three themes in each sermon. In section seven, a defense is given for each of the three themes being emphasized in preaching the Old Testament.

The book represents a rich balance of disciplined study of the Bible, theological synthesis, and occasional practical advice. The aim of Piper’s book is to provide a theological account of preaching, over-against a “how-to” manual. Though the text is not primarily practical, the theory bears great practical payload.

It is impressive how much ground Piper covers in one volume. However, the text is long (more than 300 pages). This length is not simply owing to thoroughness, but also to repetition. Piper’s method is meticulous and obvious—appropriately so, as he contends for the necessity of preachers using sound logic (pp. 123–38)—but at points his transitions are cumbersome as he constantly restates ground already covered in order to continue building his argument.

The most intriguing, although potentially puzzling, aspect of Piper’s book is his repeated stress on “the reality factor in the task of exposition” (p. 161). It is not immediately clear what Piper means by this notion, especially early in the work. The theme becomes frequent from part five on. Here Piper explains that “the content of preaching, in its essence, is not the biblical text (which, nevertheless, remains indispensable in all its details), but the reality that the text is communicating” (p. 160, emphasis original). However, in order to access this “reality,” the preacher needs to know “not only the immediate intentions [the author] makes clear in the text, but also the all-encompassing vision of reality that governs the way [he] thinks about everything” (p. 190). Piper contends that all Scripture orients readers to worship (glory), through the work of Christ, as we are led by the Spirit. This reality must frame both our reading and our preaching of the Scriptures. While this is a helpful corrective to preaching that fails to expound particular texts within their larger authorial or canonical contexts, I still found Piper’s concept somewhat vague, especially when it seemed at times to refer to something beyond the text—a “something” that is not always clear. Nevertheless, he is right to say that reality is perceived through the text, as he is to argue that preachers must give “rigorous attention to the very words of the biblical text and radical penetration into the reality the text aims to communicate” (p. 162).

The central thesis of Piper’s book—that preaching is worship—prohibits pastors taking a perfunctory approach in the pulpit. This caution is not sounded lightly or predictably, but with gravitas appropriate to the task and the God whom the preacher serves. Piper writes, “The message of the preacher, the herald, is not merely a body of facts to be understood. It is a constellation of glories to be treasured” (p. 66). And later, “The preacher must aim at worship and act worship” (p. 86). Amen.

Further to this thesis, Piper upholds an appropriately theocentric focus for the preaching task. He won’t allow preachers to settle for pandering to their listeners’ itching ears. The sermon must not be about the audience. Instead, it must be a rich demonstration of the truth about God so that listeners’ lives might be appropriately aligned. Only in focusing on God, and delighting in him, will the truest needs of the congregation be met.

In one of the more confronting parts of the book, Piper rebukes preachers, “You dare not pull rank.… You dare not tell your people ‘Here’s my view,’ and then proceed as if it were true only because you say so” (p. 173). He is adamant that preachers must not simply speak of the truths of the text, but that listeners must see where the truths come from, and how they are presented to us (or developed) in the text. Thus, preachers must show their listeners the passage. One struggles to think of a message for pastors that is more necessary or urgent to hear.

The refreshing nature of this volume as a theological treatise on preaching will no doubt make it a book that will endure in both significance and influence. The work is to be commended to both pastors and students training for the pastorate.