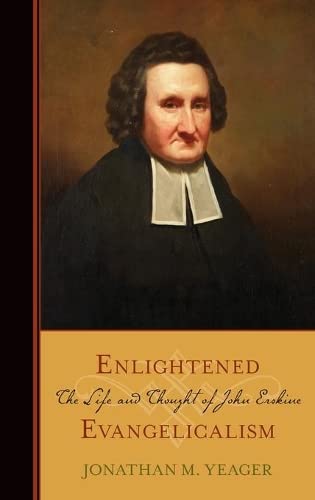 Enlightened Evangelicalism: The Life and Thought of John Erskine

The name John Erskine (1721-1803) may not be familiar to the modern Christian world, but to his friends and colleagues he was the leading Calvinist clergyman of the Church of Scotland during much of the eighteenth-century. Despite his family's desire for him to follow his father's path in law and manage the eventual inheritance of a large estate in Carnock and Torryburn, he began his career as a preacher in the town of Kirkintilloch (1744-1753). As the leader of the Popular party, he opposed patronage in favor of a popular vote for ministers and would later serve at Edinburgh's New Greyfriars (1758-1767) and Old Greyfriars (1767-1803).

Though Erskine did not possess the oratory skills of Whitefield, his sermons were heard by no less than David Hume and aimed for perspicuity without compromising the gospel message. He incorporated Stoicism into his preaching, but differed from Moderates by redefining Stoicism “entirely on the orthodoxy of Reformed theology and grounded it on a penal substitutionary view of the atonement, while at the same time exhorting the activism of mission work to save souls” (p. 62). His writings reflected a deep commitment to Reformed, evangelical orthodoxy, yet a desire for intellectual sophistication and creativity. One would think that as a Scottish Enlightened minister Erskine would utilize Thomas Reid's Common Sense Realism, but it was the contrary Lockeian empiricism that he gravitated toward. Yeager writes, “As a Calvinist, an evangelical, and an empiricist, Erskine was teaching that all three belief systems complemented each other” (p. 90).

Perhaps Erskine's greatest contribution was his involvement with the international book trade and the dissemination of works and ideas. Thoroughly devoted to the importance of books, having close to 4,000 volumes by the time of his death, Erskine committed himself to the distribution and publication of theological works. While he served on the boards of several missionary societies, his primary focus was on the written component of missions and church life. Erskine's goal in publishing was to “produce moderately priced religious literature that would be widely available for the general public” (p. 175). Often forgoing more expensive publishers, Erskine favored publishers that printed on more affordable paper, with less of a profit margin, and more open to orthodox works. He often used his leverage to get religious books that were out of print or would be otherwise overlooked to get published. Rather than concentrating on his own theological treatises, “he remained content as a man behind the scenes, promoting the abilities and writings of others” (p. 204).

Illustrating Erskine's vision, Yeager unpacks the impact he had on the young colleges of America. Erskine generously donated works to Harvard, Yale, Dartmouth, and Dickson College, and his collaboration with Princeton earned him an honorary doctorate from the institution. His involvement with America also extended to figures such as Jonathan Edwards and Joseph Bellamy. Despite never meeting, Erskine and Edwards formed a friendship through letters. They shared their thoughts on theology, church, and even personal matters; during a tumultuous period of Edwards's ministry, Erskine secured a possible pastorate for Edwards in Scotland. Each of Erksine's letters was usually accompanied by several volumes, which at the time of Edwards's death comprised a third of his library. Erskine sent works that he thought would help Edwards, books that Edwards specifically asked for, and heterodox volumes that Erskine hoped would merit a written criticism from Edwards. After Edwards's death, Erskine became the “chief progenitor of Edwards' ideas” and was entrusted with the publication of much of Edwards's posthumous works (p. 150).

Enlightened Evangelicalism is a wonderful addition to other works that have skirted around the present subject matter but have never addressed Erskine in a suitable manner. Yeager's work goes beyond Richard Sher's Church and University in the Scottish Enlightenment (1985) by addressing the evangelical involvement with the Enlightenment. The work accompanies books that attempt similar thinking but with other Christian figures such as Henry Rack's Reasonable Enthusiast: John Wesley and the Rise of Methodism (1989) and Josh Moody's Jonathan Edwards and the Enlightenment (2005).

While being the definitive work on Erskine, Yeager's book is much more than a standard biography. Yeager taps into the study of the book trade and its impact on theological and ecclesiastical issues during the eighteenth century. The study also adds light to the Transatlantic Awakening and the rise of evangelicalism. Especially profitable is Yeager's discussion of eighteenth-century evangelicalism and the Enlightenment. Although he may fail to convince Sorkin and particularly Israel that Erskine was an active member of the Enlightenment, by showing how Erskine utilized Enlightenment thinking Yeager does complicate the issue of the Enlightenment. More importantly, Yeager illustrates a successful example of Christian participation with critical thinking and creatively incorporating new methodologies into orthodox theology. Erskine's ministry is a testament to Christian humility based on countless hours of encouragement through letters, generous financial support through books, and the dissemination of Christian ideas through the promotion and criticism of other authors. Through clear prose and strong research, Yeager brings to light Erskine's thankless endeavors during the early stages of evangelicalism.