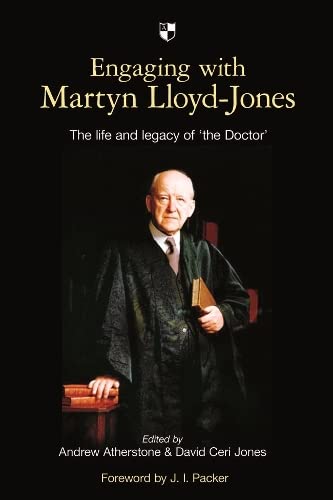 Engaging with Martyn Lloyd-Jones: The Life and Legacy of ‘the Doctor’

The appearance of this anthology assessing the significance of Martyn Lloyd-Jones (hereafter MLJ) is to be warmly welcomed, not because the outlines of the life of this venerable preacher (1899-1981) have previously gone unexplored (indeed the impressive introduction evaluates four previous attempts), but because this is the first attempt to assess the man's career in a way properly characterized as multi-perspectival.

Eleven contributors, many of them distinguished researchers in their own right, met at Wycliffe Hall, Oxford, in December 2010 to assess the career and influence of MLJ, longtime minister of Westminster Chapel, London. At the distance of thirty years from the eminent preacher's death, there is both advantage and disadvantage in making fresh assessment. As for the former, there has been much settling of the dust of the controversies in which MLJ found himself embroiled after 1960; the passage of time can have made the needed work of reassessment only easier. But as to the latter, the passage of thirty years means that a whole fresh generation of evangelicals has reached mid-life with little or no knowledge of MLJ. This means that the contributors to the anthology have their work cut out for them in reestablishing the significance of this evangelical leader.

Among the weighty questions taken up in the 2010 conference were those of MLJ's place in the twentieth-century resurgence of Calvinism (ch. 1). D.W. Bebbington concludes that MLJ was propelled by a Reformed resurgence already underway in the 1930s. We are helped by David Ceri Jones to see that MLJ's being Welsh by birth and earlier pastoral experience, yet positioned in the heart of London from 1939 onward, cast him as something of an 'outsider' standing near the center of English Christianity (ch. 2). The skillful writing of Ian Randall (ch. 3) depicts MLJ-who had been enamored with the eighteenth-century evangelical revival-consumed with preaching and praying for national revival in the somber 1950s, a time of national retrenchment. MLJ was not the only evangelical leader sounding the trumpet this way; yet he with others did not live to see his aspirations fulfilled.

The fourth chapter, by William Kay, is particularly striking. It addresses both the question of MLJ's relations with various expressions of Pentecostalism, with which he shared a belief in a second work of grace in the believer (while disagreeing over what that work entailed), and the corollary of how the conservative Reformed constituency that had looked to MLJ for leadership fractured over their leader's ambivalence on such questions. This chapter, taken in combination with that of Bebbington (above) requires that readers reassess the conventional wisdom that MLJ was nothing if not the great Calvinist standard-bearer of his time. MLJ's affinity with Pentecostalism was, to a considerable degree, an expression of his dismay with what he took to be conservative Calvinist rigidity.

Two persons closely associated with one expression of the MLJ legacy, the London Theological Seminary (founded in 1977), explore the preacher's ideas about theological education and about twentieth-century theology in general. Though MLJ had trained and worked as a medical doctor of considerable distinction, his own ideas about theological education were highly ambivalent. Theologically self-trained, he seemed to harbor an aversion to the formal academic study of theology (at least on the university model) out of fear that the secularization underway in public universities was undermining theological education conducted in conjunction with them. He initially supported and eventually withdrew his support from the London Bible College (founded in1946), now London School of Theology, and from 1977 threw his weight behind the new, less-pretentious school. Philip Eveson, long-time principal of London Theological Seminary, explores MLJ's sometimes-conflicted views on this subject. One finds that MLJ would have been willing to be nominated to be the principal of a Welsh theological college in 1938! Robert Strivens, current principal of London Theological Seminary, on the other hand, demonstrates MLJ's quite extensive personal reading of the works of Karl Barth. There is complexity here that resists easy categorization.

Coeditor Andrew Atherstone offers the single best account known to this reviewer of the public confrontation of 1966 involving MLJ with the equally prominent John Stott (ch. 10). The context was that of a surging ecumenical movement, with evangelical congregations and ministers within doctrinally comprehensive denominations feeling quite unprovided for as union talks proceeded apace. MLJ, having accepted the invitation of the umbrella-like Evangelical Alliance to address that current bewildering situation, took the opportunity to advocate the coming together of Britain's evangelicals who were now scattered across and within various denominations. Atherstone, while allowing that the MLJ appeal was lacking in clarity, considerably advances our understanding of this key episode by his explaining that Anglican evangelicals were seceding from their denomination in considerable numbers at this time, quite apart from the sentiments of MLJ. The intervention of John Stott, immediately on the heels of the MLJ address (an intervention for which Stott later apologized) was, on this explanation, his attempt to staunch an exodus already underway (as well as what might yet be encouraged by MLJ's exhortation).

Of similar sterling quality is the eleventh chapter, provided by Puritan scholar John Coffey, regarding MLJ's love of church history and especially Puritan history. This is not the esoteric inquiry one might imagine. MLJ was, after all, as responsible as any evangelical in the period since 1950 for the marshaling of the opinions of the sixteenth-century Reformers and the Puritans of the subsequent century on contemporary theological and ecclesiastical questions. Coffey's concern is to observe that MLJ's use of history was not characterized by any particular rigor. While MLJ left evidence of having digested some twentieth-century analyses of his favorite epochs of church history, the overwhelming impression gained is that MLJ's appeals to history were too harnessed to his polemical concerns. Coffey also observes that the Puritan publishing program, so energetically advanced by the Banner of Truth (of which MLJ was a principal backer) was, in effect, a program that put into circulation the “canon” of Puritans favored by MLJ.

Taken all in all, this excellent volume is a demonstration of how much the study of church history gains when it is “re-complexified.” Virtually every contributor to the anthology communicates deep respect for the memory and leadership of MLJ and shows that such reverence is compatible with serious efforts to untangle and reinterpret the contested legacy of a great Christian leader. If there is a caveat to be raised, it would simply be that the volume devotes no segment to exploring the legacy of MLJ outside the UK. When one considers that MLJ discovered the writings of B.B. Warfield in Toronto, was first observed by the man he would succeed in London (G. Campbell Morgan) while preaching in Philadelphia, came to the attention of post-war evangelicals outside the UK by a preaching series at Wheaton, delivered his lectures on homiletics (later published as Preaching and Preachers) in Philadelphia, and whose ministry was emulated by the erection of “Westminster Chapels” in cities all over North America, we can acknowledge that the influence of this Christian leader was far wider even than this excellent volume suggests.