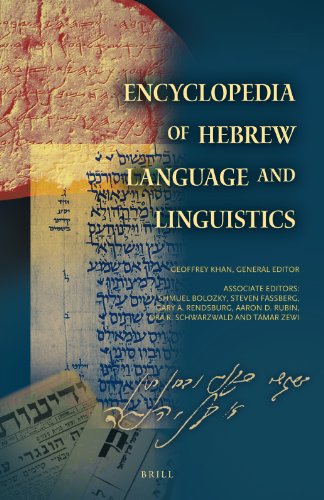 Encyclopedia of Hebrew Language and Linguistics

Brill’s Encyclopedia of Hebrew Language and Linguistics (EHLL) is a monumental work. It has two stated aims: (1) to bring together the varied research on different periods of Hebrew into one reference tool; and (2) to bring study of Hebrew into line with the discipline of general linguistics. This latter aim is important since the study of Hebrew has tended to lag behind in proper linguistic analysis. Brill intends to update the online edition of EHLL on an annual basis, ensuring currency.

The articles vary in length from 200 words to over 10,000 words. They cover a wide spectrum of topics, not all of which will be of use to scholars that focus primarily on Biblical Hebrew. For example, the articles ‘Castilian Spanish, Hebrew Loanwords in’ and ‘Bumper Stickers’ are interesting and exemplify the reach of EHLL in discussing Hebrew, but few biblical scholars will find them of practical use.

The contributors are drawn from many quarters of scholarship and parts of the globe, making this a good collaborative effort. However, this strategy has not avoided parochialism in some articles. For example, the article ‘Biblical Hebrew, Late’ by Avi Hurvitz showcases his approach to the issue of diachrony in Biblical Hebrew. The alternative model proposed by Ian Young, Robert Rezetko, and Martin Ehrensvärd is mentioned only to critique it negatively, rather than to explain it. This means the article gives a largely one-sided view with little conceptual scope that would give the reader an ability to make independent judgements. Since the subject matter is still very much a live topic, this is an unfortunate feature. One hopes that the annual updating to the online edition might provide more airtime to alternative views.

One curious article is Alviero Niccacci’s essay on ‘Consecutive Waw’. It includes a discussion of prevailing opinions of the form and function of the wayyiqtol and weqatal verbs, and then offers a different perspective, namely that the consecutive waw attached to Hebrew verbs is actually part of the verb itself. This is a curious conclusion, given the connection of these verbs to forms without the consecutive waw (e.g., the jussive). So although the article covers a range of opinion, the position settled upon is somewhat idiosyncratic. Nonetheless, the means of determining this idiosyncrasy is contained within the article itself.

There is, however, some excellent material explaining a range of approaches, especially in the articles relevant to Biblical Hebrew. For example, John Cook’s article ‘Actionality (Aktionsart): Pre-Modern Hebrew’ is a little over 2000 words, and provides an excellent tour of both situation aspect and phasal aspect. Cook provides a history, an explanation, and multiple examples of both these forms of actionality. These then complement his other article on ‘Aspect’. Similarly, Ahouva Shulman’s article on the ‘Jussive’ is an excellent reference, as is Scott Noegel’s 6251-word treatment of ‘Polysemy’ (i.e., the case of a sign having multiple but related meanings, such as the word ‘home’).

On the whole, the articles are informative and detailed, as one would expect of a significant reference work as this. Occasionally one might find a topic under an unexpected heading. For example, there is no entry for interjections, but these can be found treated briefly under ‘Exclamation: Biblical Hebrew’. This is largely the result of trying to bring the study of Hebrew into conformity with Linguistics, so the unexpected headings are still logical. There is also considerable scope for serendipitous discovery, which is useful for the Hebraist with little exposure to linguistic theory.

The articles are pitched predominantly at a technical level, so they are not exactly the kind of thing to give as reading for beginners in Biblical Hebrew. However, EHLL is a great resource for those planning and teaching modules at the intermediate and advanced levels, and as set readings for those modules. One of the strengths of EHLL is that each article contains an excellent bibliography, providing scope and specific direction for further reading. The articles on Biblical Hebrew also encompass not just morphology and syntax, but historical developments, literary influences, and orthographic discussion. Thus, one can find such articles as ‘Alphabet, Origin of’, ‘Canaanite and Hebrew, ‘Aramaic Influence on Biblical Hebrew’, ‘Paleography of Hebrew Inscriptions’, and ‘Dead Sea Scrolls: Linguistic Features’.

EHLL is a welcome resource in the study of Hebrew language. Being published by Brill, the cost may be prohibitive for individuals. However, institutional access is a must for college and seminary libraries.