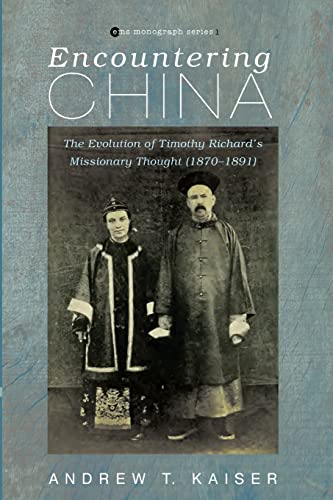 Due to the stereotypes about evangelicals and their social conservatism, a friend of mine likes to introduce them by saying, Historically, evangelicals are the Christians who resisted slavery, started orphanages, embraced women in ministry, and reached out to immigrants. It appears Andrew Kaiser is another such iconoclastic friend who is determined to flip assumptions about evangelicalism on their head. He argues that Timothy Richard (1845–1919), one of the most brilliant and controversial missionaries to China, did not depart from his evangelical faith when he forsook street preaching, promoted science, dedicated himself to famine relief, or heralded Buddhist sectarian texts as repositories of truth. On the contrary, these provocative moves were but expressions of Richard’s uncompromising commitment to the conversion of China’s millions.

To make the case, Kaiser sorts through an extraordinary collection of diaries, letters, mission periodicals, and essays that all poured out of Richard’s restless pen. His careful reading of the sources reveals Richard making momentous and sometimes startling moves in missionary practice, not because he drifted toward liberal Christianity, as some have argued, but because he was driven by three core commitments: an evangelical passion for the lost, a deep empathy for China, and an uncompromising results-oriented pragmatism (p. 230).

Once the reader grasps those intertwined motivations, nothing Richard does seems out of character. Why would a missionary stop the almost universal evangelical mission strategy of preaching on the street? Because, in Richard’s words, it was “not very productive of good results,” and provided “no success worth mentioning” (p. 42). Far better, Richard discovered, was preparing a poster with a few words, something clear enough to raise questions but enigmatic enough to drive the truly curious to search for answers. After hanging such a poster on a city wall, Richard would settle into an inn for a meal. Before long, he reported with satisfaction, seekers would surround him, kneel before him, and beg to be told the good news (p. 89).

Those kinds of conversations taught Richard that his listeners were unmoved by his appeals to scripture when he tried to prove the veracity of what he said. The Bible held no authority for Buddhists or members of a Chinese popular religion. He needed to address “Chinese difficulties” and provide “answers as would satisfy them” (p. 47). After a search of China’s religious texts, he concluded that the weightiest evidence he could provide in China was moral evidence. Richard wrote, “If we could excel the Chinese in charity to the sick, the poor, the suffering, and in giving education, then we should possess evidences which the Chinaman’s conscience would approve and follow” (p. 86).

When famine devastated North China, it was then time to practice what he preached. Richard, and the people converted through his ministry, immediately responded by giving to the poor. When personal funds ran out, Richard appealed for help. Aid from foreigners and Chinese people alike buoyed his relief efforts in Shandong’s interior, allowing his church to work with local officials to feed the poor, house the orphans, and comfort the dying. When word came that matters were somehow even worse in the province of Shanxi, a remote territory with no Protestant presence, Richard responded empathetically, and members of his church offered to accompany him to his new post (p. 118).

After enduring four years of drought that took the lives of somewhere between nine and thirteen million people, Richard campaigned for changes to prevent such a catastrophe from ever happening again. He provided scientific demonstrations to public officials, hoping to convince them of the usefulness of meteorological data. He campaigned for railways to bring in grain quickly in case of another such disaster. He pushed for modernization and political reforms. Spending so much time with Chinese leaders meant spending less time preaching, which aggravated Richard’s newly arrived missionary colleagues. Yet he justified his actions by pointing to Jesus, who not only saved the soul but also fed and restored the body. His missionary work was kingdom work, if people had the eyes to see. And if they didn’t, then at least they should acknowledge that he was still converting more people than the complaining upstarts combined (p. 198)!

Timothy Richard, this book insists, was a faithful evangelical. His methods may have changed over time, but his core convictions never wavered. In fact, they inspired his innovations. Richard wanted to see people saved. At least he did in the first half of his 46-year career. The author ends Richard’s story at the point where the Baptist Missionary Society allowed him to direct the Society for the Diffusion of Christian and General Knowledge Among the Chinese. What happened next? There are suggestions that if Richard’s wife had lived longer, his “final flights of idealism would have been restrained” (p. 122). Was it only idealism, or did the publication of The New Testament of Higher Buddhism at the end of his career signal Richard had moved along a different theological trajectory? This book does not answer that question, but it does put that onus on others to prove any dramatic change. After all, as Kaiser effectively demonstrates, evangelicalism can be a wellspring of surprising moves in mission.