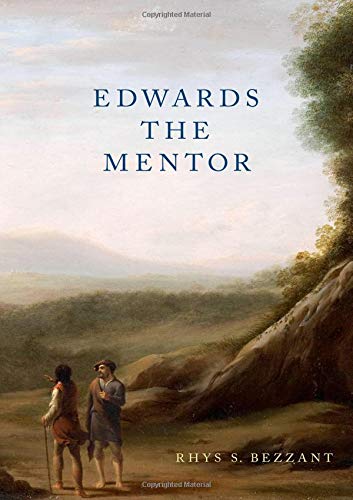 “Mentor” is not the first word that generally comes to mind when one thinks of Jonathan Edwards. However, it is the word that Samuel Hopkins uses, in capital letters, to describe Edwards in a letter to his friend, Joseph Bellamy. Edwards the Mentor, written by Rhys S. Bezzant, seeks to unpack Edwards’s efforts to train the next generation of clergy in faith and ministerial practices. This book stands as an important corrective to pictures that have painted Edwards simply as a Lockean philosopher, fiery revivalist, or even a biblical pastor, by providing the reader with a more nuanced picture of Edwards’s ministry. Bezzant contends that Edwards should be recognized as a skilled mentor of future Christian leaders. He argues that Edwards’s strategic approach to mentoring “combined eighteenth-century pedagogical insights into pastoral theology with the traditional theological themes of imitation, spiritual knowledge, and the cultivation of virtue to create a practice refreshed for a new age” (p. 152). This work seeks not only to describe Jonathan Edwards’s pastoral care ministry but also to offer recommendations for how the church today can learn from Edwards’s innovative mentoring style. Bezzant is a senior lecturer in Church History at Ridley College in Melbourne and the director of the Jonathan Edwards Center Australia. He is also a priest in the Anglican Diocese of Melbourne and serves as a canon and mentor at St. Paul’s Cathedral. He has authored several critical works on Edwards, including Jonathan Edwards and the Church (Oxford: Oxford University Press, 2013).

In a brief five chapters, Bezzant situates, describes, and provides a vision for the application of Edwards’s pastoral ministry of mentoring. The introduction helps lay out Bezzant’s vision for the book, building off of his past published work on the topic. The following four chapters focus on singular themes of Edwards’s ministry, including the self, the affections, imitation, and the inheritance of his revolutionary lens. In the first chapter, the author investigates both the classical and Protestant traditions of mentoring, laying the background for Edwards’s ministerial practices. He describes his pastoral training and how Edwards echoed and deviated from it in his guidance of Christian leaders.

The second chapter focuses on the minister’s practices and manner of mentoring in its various forms, including letter-writing, personal conferencing, residential living, directed reading, personal example, and his cultivation of friendships. Bezzant suggests these traditional practices take on an eighteenth-century disposition. Drawing on evidence from his relationships with mentees Joseph Bellamy and Samuel Hopkins, Bezzant concludes that “Edwards’s practice as a mentor was significant and sustained, drawing on a substantial tradition but modifying it as the needs of his mentees and the constraints of the eighteenth century demanded” (p. 80).

The next chapter examines the often-overlooked practices of imitation, commitment to the beatific vision, and spirituality that stand in tension with the Enlightenment principles of the pursuit of pleasure and materialistic well-being. Bezzant argues that Edwards’s governing theological principles, particularly his emphasis on the beatific vision (direct revealed knowledge of God), imago dei (the image of God in humanity), and imitatio christi (the imitation of Christ), led to new directions for Christian practice and behavior. In this standout chapter, he argues,

If the Enlightenment project modernized and naturalized the world, then in Edwards’s vision a ministry of mentoring is one possible conduit to reintegrate and reenchant experience.… His project addressed the intimate and the cosmic, for it pursued an agenda to empower the renegotiation of an individual’s agency but also to resist the disenchantment of the world. (p. 112)

The final chapter of the book explores the lasting influence that Edwards had on those that he mentored. In this section, Bezzant examines the degree to which Jonathan Edwards Jr., Joseph Bellamy, Samuel Hopkins, the ministry of the New Divinity, revolutionary leaders, and Edwards’s legacy at Andover Seminary represented his view, versus reflecting the cultural context. Bezzant concludes that “in his practice of mentoring Edwards allowed eighteenth-century philosophical concerns about human agency and institutional authority to find new expression within traditional strategies for faith transmission, and in so doing offered an embodied protest against Enlightenment fragmentation and rationalization” (p. 132). Edwards’s mentoring created a powerful school of thought by teaching the New Divinity how to transpose the Reformed faith into the contemporary context.

The Edwards scholar ends his book with a brief practical section appealing to the need for mentoring today both in the church and in educational settings. In a world where identity is often curated through social media rather than through discipleship, he recommends Edwards’s face-to-face, personal approach. Bezzant helpfully points out that just as the Enlightenment harmed the Christian faith with its appeal to autonomous individualism, so too can the age of Facebook, where in-person communication is often replaced by technology. Edwards’s example of personal mentoring can help leaders today to navigate these challenges and raise the next generation of Christian believers to love and serve Christ.

Scholars interested in Jonathan Edwards and the history of mentoring should consider reading this short, well-researched work. It offers a robust historical and theological consideration of Edwards’s role as a mentor during the changing landscape of the Enlightenment period. As Bezzant asserts, the eighteenth-century minister’s “personal work, one to one with parishioners, has much to commend it today, for those employed in local church ministries need to remember the importance of finding time for individuals in the midst of their busy pastoral labors” (p. 2). Bezzant’s work is a comprehensive account of Edwards’s mentoring approach and is heavily conversant with the leading Edwards scholars such as Kyle Strobel and Oliver Crisp and essential primary source documents. His extensive footnotes, bibliography, and index are helpful resources for studying Edwards’s mentoring practices. Due to its intellectual and historical tone, however, this monograph is best suited for an advanced academic audience. The author utilizes long, complex, highly academic prose such as “mimetic theory” and “maieutic approach” and dialogues frequently with scholars, making it somewhat inaccessible to a general audience or even the average pastor. While he aims to be practical, even his final section tends to be more descriptive than application-oriented. His tone, language, and historical approach would best serve Edwards scholars interested in a specific account of Edwards’s place as a mentor during the Enlightenment period.