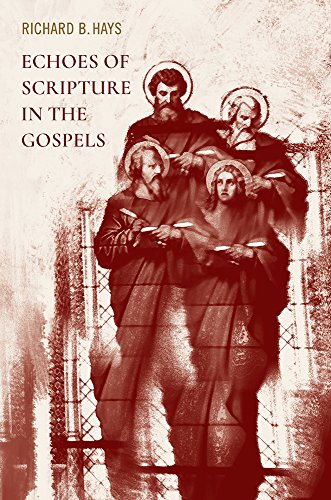 Echoes of Scripture in the Gospels

It has been almost three decades since the publication of Richard Hays’s landmark work, Echoes of Scripture in the Letters of Paul. Those hoping for a follow-up volume devoted to the gospels were heartened by the release of Reading Backwards: Figural Christology and the Fourfold Gospel Witness (Waco, TX: Baylor University Press, 2014). That much shorter work was the first fruits and foretaste of the greater harvest that Echoes of Scripture in the Gospels represents; much material in the latter will be familiar to those who have read the former.

Echoes of Scripture in the Gospels, its completion hastened by Hays’s cancer diagnosis, revisits the concept of ‘echo’ explored in his earlier work. Echo or metalepsis differs from quotation or explicit allusion: the echo evokes the wider context of the text to which it alludes, beyond that which is directly cited. It establishes an intertextual correspondence between two or more texts, allowing illuminating arcs of hermeneutical electricity to travel across the intervening spaces.

The book contains four larger chapters, one devoted to each of the gospels, with a shorter concluding chapter summing up the broader argument and identifying some principles to guide us as readers of Scripture. Each of the four major chapters is subdivided into five sections. The first is a brief synopsis of the evangelist’s mode of interpreting Israel’s Scripture; the last summarizes the findings of the chapter. The main body of each chapter is devoted to the remaining three sections, which treat the way an evangelist ‘invokes/evokes’ Scripture to narrate or re-narrate the story of Israel, the identity of Jesus, and the church’s role in the world. So structured, the book is able to showcase both the distinctiveness and the ‘polyphonic’ unity of the evangelists’ fourfold witness.

Hays’s exegesis is frequently scintillating, not least in its vindication of the evangelists’ citations of the Scriptures against those who accuse them of haphazard, opportunistic, or careless misappropriation. Rather than treating the Old Testament as a grab bag of predictive prooftexts, Hays demonstrates that the skilful interweaving of citations and allusions in a text like Mark 1:1–3 establishes a scriptural matrix within which the mystery of the Messiah will be disclosed to those who have the ears to hear. Matthew’s more overt citations, which are also often subtly blended quotations, accomplish something similar, illuminating the deep correspondences between Christ and his precursors and the manner in which ‘he gathers into himself the significations imbedded in their stories’ (189).

In contrast to figural readings that focus narrowly on a one-to-one relation between types and antitypes, for Hays significations and motifs routinely overlap, recur, and coalesce in a more musical fashion. The literary artistry of Luke, for instance, manifests a world that is richly redolent with scriptural memory, reverberating with its expectant whispers. Each fleeting appearance of a variation upon a given scriptural theme affords the attentive hearer an enlightening foil against which to understand the evangelist’s story of God’s salvation in Jesus. John presents a more transfigural reading of Scripture, summoning his readers ‘to recognize the way in which Israel’s Scripture has always been mysteriously suffused with the presence of Jesus’ (289).

Although it is surrounded by much more material in this volume, at the heart of its account—as was the case in Reading Backwards—is a masterful demonstration of the close connection between a robust Christology and the figural reading of the Scriptures. As we attend more closely to the evangelists’ use of Scripture, Hays demonstrates that the divine Christologies of the Synoptics in particular assume a far more pronounced form.

This will be a valuable reference volume for any student of the gospels, even though it is far from comprehensive and also suffers somewhat from its lack of a topical index. Many readers may have hoped for more extensive discussion of various topics (in my case the parables) but it would be unfair to fault Hays for such omissions, considering the vast scope of the potential subject matter. There were a few curious apparent oversights, such as the absence of any discussion of 2 Chronicles 36:23 in the otherwise superb treatment of the Matthean Great Commission.

The close attention that Hays gives to the textual mediation of the figural relations between events or persons is a particular strength of his treatment. It does, however, occasionally leave him vulnerable to an overemphasis upon the pole of the evangelists’ narrative genius at the expense of the power of the agency and witness of the Scripture itself—not least in what Richard Davidson has termed the devoir-être force of scriptural prefigurations—and that of the divine providential orchestration of history.

For Hays, the evangelists’ readings of Scripture are not hermeneutical keys to their respective gospels alone, but invitations to us to read in similar manners. Recognition of the presence of an echo requires alert and attentive readers with a ‘complex poetic sensibility’ and extensive familiarity with the evangelists’ ‘encyclopedia of production’. High demands made upon reader-competence are a prominent dimension of Hays’s account of scriptural interpretation. Unfortunately, although his practice may be exemplary, he suffers from a relative theoretical inattention to methodology and failure adequately to define scriptural competence, the practices that shape it and the principles that guide it.

Such reservations are overshadowed by my immense appreciation for this exhilarating work. This is a book abounding in rewarding exegesis, and is doubtless one that I will revisit many times in the future.