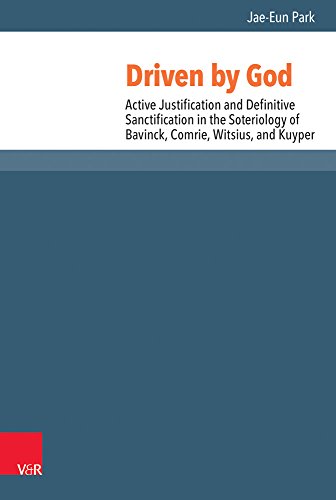 Driven by God: Active Justification and Definitive Sanctification in the Soteriology of Bavinck, Comrie, Witsius, and Kuyper

With this revision of his PhD dissertation, Park offers us a monograph that moves forward the discussion on the two contested doctrines of justification and sanctification; or, more specifically, the active and definite aspects of the same, which are distinct from passive justification and progressive sanctification, respectively.

In the introductory chapter, Parker notes that, while accepted in the main “in conservative evangelical and Reformed circles” (p. 15), active justification and definite sanctification have been criticized by contemporary theologians. In light of these current criticisms, Park’s purpose is to advance our understanding of these doctrinal categories both by answering the objections raised and by demonstrating that these categories are “biblically supported, theologically clarifying, and of practical help to the believer” (p. 17).

To accomplish his stated purpose, he proposes an examination of “four parallel characteristics … common to active justification and definitive sanctification” (p. 23): (1) inseparability; (2) objectivity/decisiveness; (3) Christ-centeredness; and (4) God’s sovereignty in salvation. Each of these characteristics will be explicated by examining the thought of four theologians from “the broader Dutch Reformed tradition.”

The volume is divided into three main parts. Part I delves deeper into what was touched on in the introduction, namely, a definition and defense of definite sanctification (ch. 2) and active justification (ch. 3).

Regarding definite sanctification, he summarizes John Murray’s (1898–1975) teaching on the subject, whom Parker accurately describes as the “chief representative of the doctrine” (p. 29). He then defends it by presenting a biblical, confessional (e.g., the Heidelberg Catechism), and theological case (by way of Francis Turretin [1623–1687]) before entering into the theological disagreements surrounding the concept. Here, he answers both J. V. Fesko’s more serious charge that it confuses the forensic and renovative aspects of salvation and Michael Horton’s less serious charge that it adds a distinct point to the traditional ordo salutis independent of progressive sanctification.

Regarding active justification, after briefly presenting the biblical foundation for the doctrine, he answers three main objections—first, that it undermines sola fide; second, that it leads to antinomianism; and, third, that it is equivalent to the notion of justification from eternity—three serious charges indeed!

This first part clears the way for Part II, which is the bulk of the volume and is a constructive evaluation of the four aforementioned properties of definite sanctification and active justification as they appear in four Dutch Reformed theologians, i.e., inseparability in Herman Bavinck (1854–1921) (ch. 4); objectivity and decisiveness in Alexander Comrie (1706–1774) (ch. 5); Christ-centeredness in Herman Witsius (1636–1708) (ch. 6); and God’s sovereignty in salvation in Abraham Kuyper (1837–1920). Part III expounds on and effectively demonstrates the theological importance and practical significance of definite sanctification and active justification for the life of the believer.

By way of evaluation, there is much to commend this book. Here, we have a work of theological retrieval. Parks does not stop at a simple definition and defense of the two concepts in view. He retrieves the insights of four significant Dutch Reformed theologians to display in full the theologically soundness and beauty found in these two doctrines. At the same, his retrieval is not deaf to their distinct voices as he notes each theologian’s unique approach (e.g., Bavinck’s via media) and theological milieu, nor does it obfuscate or minimize problematic doctrines that emerge (e.g., Kuyper’s leanings toward eternal justification). Moreover, Parks is attentive to the primary sources, engaging directly with the Dutch originals and offering a careful, perceptive reading of the same, and is conversant with the secondary literature surrounding these theologians. His summary of Comrie is especially valuable as virtually none of Comrie’s writings have been translated into English.

In addition, he successfully demonstrates not only the theological validity but also the spiritual vitality of definite sanctification and active justification, especially by noting the discreet components of these doctrines. For example, the inseparable connection between active and passive justification and definite and progressive sanctification brings to the forefront the fact that the definite and active are each one aspect of the larger concept which is inextricably bound to the other aspect—the progressive and passive, respectively. These definite and active aspects serve as the ground and objective basis of salvation and, as such, bring into focus God’s determination in salvation. With that in focus, the error of reducing salvation to one’s response is avoided, whether progress in sanctification or faith leading to justification.

Despite these strengths, two minor quibbles ought to be noted. First, Parks’s definition of active justification is not entirely clear until his discussion in Part II. Second, there is some unnecessary repetition between the first chapter and Part II and within the components of Part II. While such redundancy is likely unavoidable, a word regarding the substantial overlap between them would better prepare the reader.

To conclude, Parks gives us a first-rate work in theological retrieval, which is cognizant of historical nuances and careful in his reading of the primary sources. It is a superb monograph on soteriology, especially active justification and passive sanctification. This is highly recommended for anyone wishing to have a firmer grasp of the salvation we have in Christ.