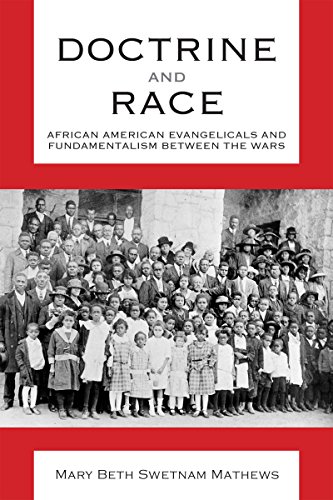 Doctrine and Race: African American Evangelicals and Fundamentalism between the Wars

Contemporary historians have noted the division that exists among evangelicals of different ethnicities. As Mary Beth Swetnam Mathews demonstrates in Doctrine and Race, these divisions go back at least a century, to the days before conservative Christians self-identified as “evangelical,” and the American Protestant landscape was bifurcated into Modernists and Fundamentalists.

How did African American evangelicals fit into the Protestant landscape? Mathews, professor of religious studies at the University of Mary Washington, argues with clarity and concision that black Baptists and Methodists in the interwar years paved a third way. Using the denominational papers of two Baptist and two Methodist denominations, she shows how African American evangelicals between the wars embraced “twin ideals of African American life—racial identification and overwhelmingly Protestant church allegiance—to reshape the world around them” (p. 1). They would not side with Fundamentalists or Modernists, for “with one they would be safe in inspiration but not in life; with the other they could gain the world but lose their soul” (p. 2).

In chapter 1, Mathews examines the ministries of white (mostly Baptist) Fundamentalists. She shows their shared attitude toward blacks was oppressive. At worst, Fundamentalists were outright racist; at best, they were paternalistic. These white Fundamentalists were mostly segregationists. They saw no need for a religious dialogue or alliance with blacks. Most viewed blacks as gullible, good-hearted simpletons, prone by nature to be misled by false teaching. Thus, African Americans could be helped by Fundamentalists and their gospel but had nothing to offer in return.

Chapter 2 shows the general stance of black evangelicals toward the Fundamentalist-Modernist controversy. While all of these denominations opposed Modernism, only the National Baptist Convention Unincorporated went so far as to identify as Fundamentalist. Moreover, all black Protestants occasionally made use of Modernist terminology‚ even if sometimes not using it in the same way or for the same purpose. While they did not fit neatly into either camp, Mathews proves that black Protestants were more doctrinally akin to the Fundamentalists.

Mathews continues to examine the third way of black evangelicals in chapter 3 with regard to eschatology and evolution. Almost all blacks rejected the dispensationalism of (mostly Baptist) Fundamentalists, both because it smacked of novelty and because they weren’t convinced of a central tenet of the system: that the world was getting worse. For African Americans, it had been difficult enough for them already. On the second issue, while some blacks rejected evolution, they were generally more open to a kind of evolution that would not directly contradict Scripture. This led them to clarify their doctrine of inerrancy and biblical infallibility.

In chapter 3, Mathews shows that African American evangelicals kept pace with Fundamentalists on social morals both because of their biblical convictions and because they believed this would bring social uplift. Their moral beliefs were manifested in their writings on Prohibition, marriage and divorce, dancing, and more. But they also spoke to social ills that white Fundamentalists left alone, like lynching. While the unity of black evangelicals on most of these social matters would eventually disintegrate, the one issue on which they remained undivided was civil rights (p. 125).

In her final chapter, Mathews shows the consistent outcry against racism by all black Baptists and Methodists spanning the interwar years. For them, this was a test of orthodoxy, of true religion. Thus, many white Fundamentalists were not believed to be a part of the true church. Black evangelicals spoke biblically as they prophetically decried lynching and other acts of racial injustice. While Mathews sometimes refers to this prophetic denunciation as “progressive,” she concludes more accurately by writing that, to black Christians, they were neither conservative nor progressive; for them, it was just “the plain truth” (p. 152).

Mathews demonstrates with clarity and force her thesis that black Protestants in the interwar years paved a third way for Christianity—indeed, a way that was more biblical than the two options for white Christians. They refused to accept the Christianity of Fundamentalists who seemed unconcerned with their station in this life, and the Christianity of Modernists that offered them nothing for the next.

There are few flaws in this work. While Mathews argues that black Protestants were more doctrinally akin to Fundamentalists than Modernists, she seems at times to overstate their occasional Modernist tendencies. For example, she quotes J. H. Frank saying Scripture “was NOT written to be authority in history, in science, in art, in philosophy—but to teach life and how to live.” She labels this statement “sweeping in its apparent modernism” (p. 64). Yet is this statement so different than the doctrine of inspiration set forth by the Princeton theologians of the late-nineteenth century, who affirmed “that all the affirmations of Scripture of all kinds,” including “physical or historical fact,” are without error when rightly understood, they too recognized that the Scriptures “were not designed to teach philosophy, science, or human history as such” (Archibald Hodge and Benjamin Warfield, “Inspiration,” The Presbyterian Review 6 [1881]: 255–60)? Isn’t Frank’s statement, likewise, a statement about the usage and purpose of the Bible, rather than its truthfulness?

Similarly, Mathews argues that black Protestants used Social Gospel terminology by highlighting their talk of “the kingdom of God.” Yet the language of God’s kingdom is not Social Gospel language—even if it was appropriated by Modernists. Rather, this language came from the very mouth of Jesus, who came preaching, “The time is fulfilled, and the kingdom of God has come near” (Mark 1:15 CSB). It is not the exclusive property of theological liberals; all Christians have used it for 2,000 years. It may be the case that black evangelicals used “kingdom of God” language in a manner more akin to the Social Gospel use of the phrase, but if so, Mathews does not argue or demonstrate this.

This is perhaps the greatest tension in the book—Mathews’s tendency to identify black evangelicals with either Fundamentalists or, as above, Modernists, when they were simply aiming to be biblical. Yet perhaps this tension is unavoidable, and Mathews is not showing where black Protestants were “fundamentalistic” or “modernistic,” but where their biblical ideas simply overlapped with one group or the other. Ironically, identifying this tension makes a case for the effectiveness of the book and the faithfulness of its subjects. For, as Mathews concludes, black Baptists and Methodists were not interested in being theologically conservative or progressive. They were interested in “the plain truth” (p. 152). This interest led them to theological fidelity and social action. In this, black Protestants in the interwar years give us a unique model of faithfulness—a model Mathews has helpfully retrieved, and a model we would be wise to heed in our own racially divided and culturally chaotic moment.