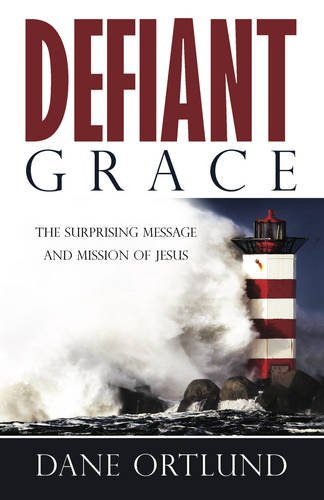 Defiant Grace: The Surprising Message and Mission of Jesus

J. I. Packer wrote that we ought to constantly meditate on the four Gospels “over and above the rest of our Bible reading: for gospel study enables us both to keep our Lord in clear view and to hold before our minds the relational frame of discipleship to him” (Keep in Step with the Spirit [2d ed.; Grand Rapids: Baker, 2005], 61). An abundance of works have filled the evangelical catalogs on the Gospels, each seeking in its own way to help us follow Packer’s wise advice, but the vast majority of them have trended toward the explicitly apologetic or the purely didactic. There are of course ample commentaries on the Gospels and plenty of entries in the category of “historical Jesus” studies. But Dane Ortlund’s little book Defiant Grace fills a big gap.

Neither apologetic argument for the historicity of Christ or the veracity of his miracles nor a series of lessons from Jesus’ life, Defiant Grace is a short but powerful exultation in the gospel at the heart of the proclamation of the four Gospels. Setting his course straightaway in the introduction, Ortlund shows us his “Packerian” aim with the work:

Like a bad back that needs to return repeatedly to the chiropractor for straightening out, our understanding of Jesus needs to be straightened out over and over again as our poor spiritual posture throws our perception of him out of line—domesticating himself and conforming him to our image, rather than transforming us into his. (p. 11)

And yet Defiant Grace does not serve up this straightening out in as sober a fashion as a chiropractic treatment might indicate. Indeed, “the grace that comes to us in Jesus Christ is not measured” (p. 11), Ortlund goes on to say, and while his book is no longer than necessary, Ortlund’s exhilaration in highlighting the measureless grace in the life and ministry of Jesus is measureless as well. The effect is one of worship, a quality sorely lacking in far too many Christian books. If “grace feels like moral vertigo” (p. 13), Defiant Grace feels like the discombobulation of the self-interested hearts and minds Jesus keeps confronting and comforting in the stories of Matthew, Mark, Luke, and John. What we have in this book is four shots of doxological whisky.

As it is not Ortlund’s purpose to provide a commentary or a textbook, his insight into the historical and cultural context of Jesus’ ministry is not substantial, but that does not prevent it from being substantive. Remaining measured in his examination of the relevant texts allows more room to revel in them. There is ample evidence on every page of the author’s scholarly cred—confirmed by the prevalence of academic texts in the copious endnotes—but he plays the technical stuff close to the vest, deftly trading in professorial exegesis for literary allusions (Lewis by far the most frequent, but also Chesterton, Tolstoy, A. A. Milne, and even Disney) and pastoral reflections (via fellows ancient and modern, from Luther to Lloyd-Jones, Athanasius to Tchividjian). And in sweet juxtaposition, the book stays imminently useful by downplaying the immediately practical. Its crosshairs, like Jesus’, are placed squarely on the reader’s heart.

Gospel by Gospel, we are taken through some of Jesus’ most central teachings, parables, and miracles. Ortlund reveals the composite portrait of Christ and his gospel revealed in Matthew’s gracious dismantling of moralism, Mark’s revolutionary exaltation of a cross-carrying king, Luke’s upending of our “social intuitions” (p. 72), and John’s cosmic evangelism. It’s a wonder of a book, really, how in such brief span we see not only the distinct perspectives of the four Gospels but also the unity they present of gospel-centrality (grace for sin and contra law). This is really a unique aspect of the book, as so many authors today, even inadvertently in what they neglect to preach on and write about, have not shown us the central truths of justification by grace alone through faith alone in the four Gospels, unwittingly aiding the assertion that Paul’s gospel differs in substance from Jesus’ gospel. Defiant Grace over and over shows us this is not the case.

In each of the four chapters, Ortlund also shows us how the history and prophecy of the OT inform and consummate in the first advent of Christ, providing a good overview of the types and shadows we could not see more clearly otherwise. In his treatment of Matthew, then, we get a law-primer (pp. 20, 25); in Mark an explanation of apocalyptic language in Daniel (pp. 46–48); in Luke the OT narrative arc of the “gospel problem” of atonement, access, and shalom (pp. 89–92); and in John the creational echoes of Genesis in the incarnation and new creation (pp. 94–95) and the fulfillment of the long-revered Logos of God (pp. 98–99). The result is masterful, really.

To complain about what Defiant Grace is not would seem to be approaching with cross-purposes to it. As I said, there are plenty of entries in the category of what this book isn’t. But there are too few of what it is. The only noticeable weakness of the book is that one reaches the end and wishes there were more of it. I once heard that John Piper said so many commentaries were sermon-killers because it was rare to find a commentary with the word “oh!” in it. In that respect, Dane Ortlund has made an offering most valuable in the growing “gospel-centered” canon—he has given us a book on the four Gospels that sings, that shows us Christ in his word and helps us say “oh!”