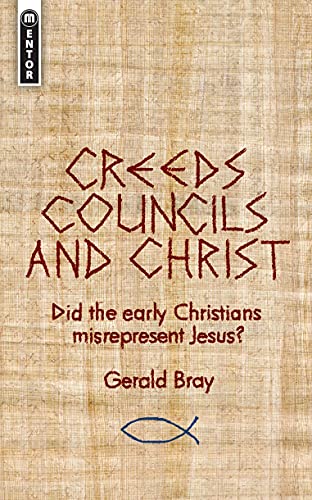 Written by Gerald Bray Reviewed By T. A. Smail
History and Historical Theology

Those who appreciate strong and stirring blasts of the trumpet against modern reductions of classical Christian orthodoxy will appreciate this book. Since I number myself among that company I like it rather a lot! The author gives no quarter; the pontifications of biblical critics are swept aside, the traditional picture of who was right and who was wrong in the debates of patristic times is upheld and affirmed, the great Karl Barth is firmly, if not always fairly, put in his place, with a confidence and assurance that sometimes verge on the swashbuckling and do not always do justice to the positions and people the author opposes. Nevertheless, he is, in my judgment, quite often right!

The title explains the main purpose of the book which is to give an account of the development of Christian doctrine, particularly in the early centuries, that will show how the church came to the understanding of God as Trinity and of Christ as the incarnate Son, which alone allowed it to proclaim the New Testament gospel of salvation with integrity and coherence. The aim is partly to describe that historical process, but still more to justify and defend it.

Starting from a very high view of the authority of Scripture, and what I would consider an ultra-conservative position about its authorship, Bray holds that to submit to Scripture does not dispense us from doing theology, but rather demands it. He rightly chides contemporary evangelicals for their concentration on experience and their neglect of dogmatic theology, which leaves them defenceless before the attacks of radical critics. The answer to bad theology is good theology, not no theology. In this context we are offered an interesting definition of dogmatics: ‘Dogmatics is the study of the fundamental principles on which the teaching of Scripture is based and which are necessary for a proper understanding of God’s plan of salvation in Christ’ (p. 63). In other words we need to study not just Scripture passages but the theological ‘principles’ they express.

To do that we shall need to start not with the Protestants or the Puritans but with the Catholic creeds of the fourth and fifth centuries. Bray of course wants to affirm the positions of the Reformation, but does so within a wider affirmation of Nicaea and Chalcedon to which Eastern Orthodox, Roman Catholic as well as Anglican and Protestant Christians are equally committed. This gives a very positively ecumenical dimension to the book. The heroes are as much Athanasius and Augustine as Luther or Calvin. Those for whom the struggles of the Fathers for the gospel are strange territory will find this book a fascinating and, on the whole, clear and reliable account of what they were fighting for, and will not be allowed to forget that the same battles have to be waged today. We too have to contend for the triune God and the incarnate Christ against those who deny both, and Bray’s account of how it was done first will help us to do it better now.

Like all reviewers of all books, I have my reservations. For one who builds so much on the written word of Scripture, Bray has a good deal more to say about the formation of the canon than he does about the basic question about why we should believe the Bible at all. The man who counters the claim ‘the Bible says …’ with the retort, ‘So what!’ will hardly be satisfied with the single paragraph on page 55. Covering so much ground so quickly tends to encourage the author’s propensity to make sweeping but unsubstantiated assertions. For example the case for the multiple authorship of Isaiah is very much stronger than is indicated on pages 53–54, and the statement that ‘The New Testament is an authentic record of historical facts’ (p. 58), if it is to be credible, needs to reckon much more seriously with the undoubted differences in style and content between, say, John and the other three gospels.

I found the discussion of the distinct meanings of the words ‘being’, ‘nature’ and ‘person’ rather confusing. Is it either illuminating or indeed accurate to define being as ‘what a thing is’ and nature as ‘what a thing is like’(p. 147)? Is the fact that I am like my mother in any sense a definition of my nature?

Furthermore I found Bray’s almost unalloyed admiration for the so-called Athanasian Creed difficult to share. Is its obsession with the equality of the persons of the Trinity as completely scriptural as he supposes? Is its notion of faith not more like a blind acceptance of the complicated doctrinal utterances of church authority, than personal trust in God through Christ?

Those who sense that Bray is a theological friend will do well to bring a few pinches of salt with them to the feast he offers, but, if they do, they will find the fare tasty, satisfying and sustaining.

The date of Deuteronomy: linch-pin of Old Testament criticism

In the Beginning: The opening chapters of Genesis

Jesus and the World of Judaism

Jesus and the Politics of his Day

Prophecy in Early Christianity and the Ancient Mediterranean World

Biblical Interpretation and the Church: Text and Context

Reviewed by W. A. Strange
Religious Studies
VIEW ALL VIEW ALL