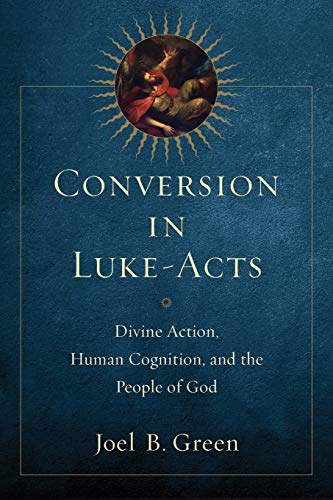 Conversion in Luke-Acts: Divine Action, Human Cognition, and the People of God

Joel Green is one of the most outstanding Lukan scholars of our time, and with this book he has again put us in his debt. In recent years he has engaged thoughtfully and creatively at the interface of neurobiology and biblical studies, not least in his very fine study of the nature of humans as embodied beings, Body, Soul, and Human Life: The Nature of Humanity in the Bible (Grand Rapids: Baker Academic, 2008). This compact book continues that trend by looking at the theme of conversion in Luke-Acts in dialogue with neurobiology.

Green begins (ch. 1) by noticing how much our present thinking about conversion has its agenda set by William James’s study, The Varieties of Human Experience (Cambridge, MA: Harvard University Press, 1985 [1902]), mediated in biblical studies by A. D. Nock in his influential study, Conversion (Oxford: Oxford University Press, 1933). James’s understanding places the focus on the interior life of individual humans. In this James is following in the footsteps of Descartes, as Green later notes (pp. 43, 161–62), in separating mind from body and regarding mind as superior. Green rejects the (impossible) view that one can study conversion without scientific “interference,” and argues cogently that the only question is “which science(s) will be allowed to speak” (p. 12, his italics). He then sets himself eight questions to explore: whether conversion is a cognitive or moral category (or both); whether repentance and conversion are distinct, notably in relation to Jews and gentiles in Luke-Acts; the degree to which conversion entails rejecting a previous way of life or a fuller engagement with a life already chosen; the relationship of conversion as change of mind (metanoia) and as transformation of lifestyle; whether conversion is event or process; whether conversion is the result of divine initiative or of human self-correction; whether Luke’s double work supports a particular “pattern” of conversion; and what acts as catalyst(s) for conversion. This is quite an agenda, and it is impressive that by the end of the book, Green has accomplished it.

Chapter 2 outlines some key relevant themes and ideas from the cognitive sciences, particularly urging that conversion—as all human life—must be understood as embodied; that is, the “interior” model will not do, for humans are to be understood as psycho-somatic unities. Nave’s important study (Repentance in Luke-Acts [Leiden: Brill, 2002]) leads Green to reflect that what makes a conversion “religious” is that it is understood within a community’s traditions (p. 39). The combination of these factors produces Green’s claim that conversion is rightly understood as involving change at the level of “bodily existence,” including “dispositions and behavior” (p. 43).

In chapter 3 Green first surveys various claims for a “pattern” of conversion in Luke-Acts and finds them inconsistent with each other. He then argues strongly that conversion and repentance should not be seen as distinct, or even overlapping, categories: rather, he will use them interchangeably (pp. 49–53). His first full engagement with the biblical text follows, reading Luke 3:1–14 for its “images of embodied transformation.” In this, the first extended discussion of conversion in Luke-Acts, Green observes that the wilderness setting of John the baptizer’s ministry echoes motifs from the exodus story and the Isaianic new exodus. This leads him to identify conversion as journey as a key theme, drawing here on cognitive linguistics as a valuable perspective on Luke’s use of language and imagery. The embodied nature of conversion is seen in the requirements John gives to various groups who ask what their baptism implies (vv. 10–14). There is a “conversionary life” entailed in baptism, which life necessarily is communal, based on shared practices. Green adopts the perspective of discourse analysis to see this passage as “framing” how Luke’s readers are to see conversion, that is, constraining how they should read later stories and material on conversion.

Chapter 4 then engages with further passages (Luke 5:1–11; Acts 9:32–11:18; Luke 5:29–32; 15; 19:1–10) to “thicken” the description of conversion from that found in Luke 3:1–14. Four key elements come in his provisional definition (pp. 87–88): conversion as journey implies “directionality”; conversion involves a life-orientation to God’s eschatological purposes; conversion, although personal, is not individualistic; and conversion cannot be separated from the practices of the people of God. This chapter contains masterful exegesis as Green explores the changes of Peter and Cornelius in the Gospel and Acts, and then material on entering the kingdom in the Gospel. Readers of Paul will notice the absence of the theme of “faith” in this chapter, largely because it is absent from the Third Gospel, although Green notes a number of places where converted people exercise trust and commitment, such as by leaving everything to follow Jesus.

Chapter 5 then addresses three questions consequent on the study so far. First: what can we see of the nature of the new community entailed in conversion to follow Jesus? Green explores this through a careful and well-argued study of the earliest believers (Acts 2:42–47) (pp. 124–32). Second, the question of agency: are people or God the agents of conversion? In a careful discussion, Green gives a both/and answer which challenges both human-will-centred views which would be most at home in his Methodist background, and divine-action-alone views which more Reformed Christians would support (pp. 132–42). Everyone has much to learn from Green’s work here. Thirdly, what about deconversion? What of people who turn away from following Jesus and belonging to his people? Green responds by an excellent study of the parable of the soils (Luke 8:4–8), followed by a series of studies of those who exemplify the characteristics of the different kinds of soil. Judas embodies “diabolical intervention” (p. 149); Ananias and Sapphira model those drawn away by the cares of this life; and Simon Magus’s is the story of a “conversion interrupted” (p. 152), showing that for a person to be baptized does not mean that their old life is entirely left behind—all too easily they can slip back into the old patterns of embodied life, the old ways of living. Green puts it well: “he may have transferred his allegiance to the Lord Jesus, but he seems still to think like a magician” (p. 155).

A brief epilogue concludes the discussion, closing with a very valuable developed definition drawn from Luke-Acts:

Converts are those who, enabled by God, have undergone a redirectional shift and now persist along the Way with the community of those faithfully serving God’s eschatological purpose as this is evident in the life, death, and exaltation of the Lord Jesus Christ, and who lives are continually being formed through the Spirit at work in and through practices constitutive of this community. (p. 163)

There is a good set of indices to help readers refer to particular discussions, and I shall certainly make use of those in my future work. The only slightly disappointing (and surprising) feature is that quite a few footnotes refer only to whole works—books or articles—rather than giving more precise pages for those who want to follow up Green’s argument in more detail.

In sum, I warmly recommend this book. It would be hard to think of a student of Luke-Acts or of Christian conversion who would not benefit greatly from it.