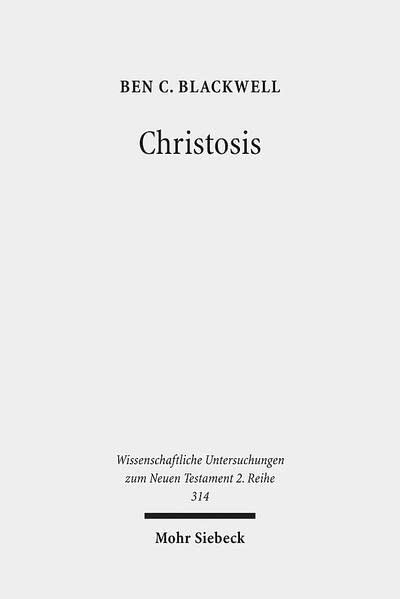 Christosis: Pauline Soteriology in Light of Deification in Irenaeus and Cyril of Alexandria

The past two decades have witnessed a serious resurgence of interest in the reception history of the biblical texts. In particular, scholars have sought to recover the voices of the church fathers as important dialogue partners for biblical interpretation. One thinks, for example, of the Ancient Christian Commentary Series (IVP), Blackwell Bible Commentaries (Wiley-Blackwell), and the Evangelical Ressourcement: Ancient Sources for the Church’s Future series (Baker) to name a few. Ben Blackwell joins these voices as he examines whether the church fathers, particularly Irenaeus and Cyril, can illuminate Paul’s soteriology. In particular, he seeks “to explore whether and to what extent theosis helpfully captures Paul’s presentation of the anthropological dimension of soteriology. That is, does this admittedly later, and thus anachronistic, notion help us to read Paul in a way that draws out and connects aspects of his theology that Western readers have routinely missed or underplayed?” (p. 3).

Blackwell devotes two chapters to an exploration of deification in Irenaeus and Cyril. Both fathers emphasize humanity as distinct from God as a derivative created being, and yet similar to God based on their creation in God’s image. Humanity shares or participates (by grace, not nature) in God’s incorruption and life. Adam was created in a state of childlike understanding and was to use his rationality and freedom to grow in his likeness to God (esp. Irenaeus). Cyril argues that God bestowed the Spirit upon Adam at creation (Gen 2:7) but that this Spirit was lost when Adam sinned, thereby resulting in humanity’s downward spiral into ever-increasing defacement of the image. Participation in the life of God is lost, and mortality, death, sin, and defacement of God’s image enters into human experience. Salvation, in the words of Irenaeus, is for the purpose “that what we had lost in Adam—namely, to be according to the image and likeness of God—we might recover in Jesus Christ” (Against Heresies, 3.18.1). Irenaeus and Cyril frequently draw upon 1 Cor 15 to argue that Christ, the second Adam, takes on human flesh in order to transmit incorruption, adoption, knowledge of God, and the Spirit to humanity. In addition to Paul’s Adam-Christ typology, Irenaeus and Cyril frequently draw upon the Pauline exchange formulae to depict how the narrative of Christ’s descent and ascent serves as a pattern for believers (e.g., Phil 2:5–11; 2 Cor 8:9). The work of Christ functions to unite believers to the Spirit who then recreates humanity in the image of God (i.e., his Son), which enables humanity to participate in the life of the immortal God. Irenaeus and Cyril draw upon Ps 82:6 (“I said you are gods and sons of the Most High”) to indicate that believers’ deification takes place by participation as they share in the sonship of the Son.

Based upon the shape of the authors’ depiction of deification, Blackwell poses four questions to Paul’s soteriology: “1) What is the shape of Pauline soteriology? 2) When do these soteriological changes occur? 3) How do these soteriological changes of the human condition come about? 4) How does this transformation of the human condition relate to creation?” (p. 117). Given their soteriological focus and the variety of themes discussed, Blackwell chooses to analyze Rom 8 and 2 Cor 3–5. In response to his questions, Blackwell argues that both texts depict the believer as liberated from an enslaving situation of sin, death, alienation from God. The believer transitions, then, from a situation of death into life. This is both a present and future, noetic and somatic reality. Perhaps most significant for Blackwell’s argument is that this eschatological life and incorruption occurs through the believers’ participation in Christ. Believers’ participate both in his sufferings and death as well as his bodily resurrection and glory. Both Rom 8 and 2 Cor 3–5 use the protological language of Genesis (image, likeness, knowledge, glory, etc.) to suggest that “believers in some sense fulfil what humanity in Adam was supposed to fulfil” although this is “an elevation to a greater, even divine, mode of existence” (p. 237). Paul’s soteriology, Blackwell states, “is about embodying the life of God. The life comes through a transformation wrought by the Spirit by incorporation into the life of Christ” (p. 237). Paul’s construal of salvation is internal to the believers as they participate in the divine presence of Christ and the Spirit.

Blackwell concludes his study by summarizing patristic soteriology as seen in Irenaeus and Cyril as well as Paul’s soteriology and suggests that they share three emphases: (1) life, incorruption, and glory; (2) the restoration of the image of God through the second Adam; and (3) participation in the work of God’s triune activity. As to whether Paul’s soteriology is properly termed theosis or deification, Blackwell suggests the language of christosis, for while Paul does indeed depict believers as participating in the divine life through being conformed to Christ by the Spirit, this term is true “to the particularly christo-form nature of the experience” (p. 265).

Overall, this monograph makes a nice contribution to the shape of Pauline soteriology in light of the concerns of two significant readers of Paul. I particularly appreciate Blackwell’s emphasis on the Second Adam recovering the glory, life, and incorruptibility that the first Adam lost as he maps this onto us through our sharing in his resurrection. His exegesis of the Pauline texts are sound and justify his conclusion that humanity’s salvation is Christo-morphic in nature. I have two criticisms of the work, however. First, there is a significant amount of repetition throughout the work and too many summaries. These tend to distract from the otherwise fine argument of the book. Second, I’m not sure if Blackwell has succeeded in having a “conversation” between Paul and the two authors. I understand his concern to let Paul be Paul and let Cyril be Cyril so to speak, but more integration is needed. It would have been helpful had Blackwell been more explicit about what particular aspects of Paul’s soteriology—readings that have been underplayed by contemporary readers—he had recovered based on using Irenaeus and Cyril as his guides. Nevertheless, Blackwell’s method, even if in need of some fine-tuning, holds great promise, his reading of Paul, Irenaeus, and Cyril is sound, and in my opinion, Christosis is not a bad title at all for describing the heart of Paul’s soteriology.