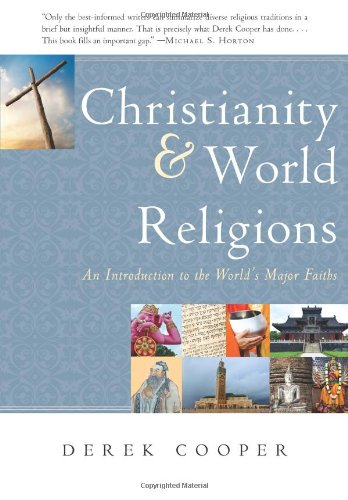 Christianity and World Religions: An Introduction to the World’s Major Faiths

Picking up this book, my first impressions were that it is far too short compared to its subject matter. As I glanced through the contents page, I felt certain that the book attempts too great a challenge: to outline, in roughly 200 pages, not only “Six Rival Stories of the World” (Hinduism, Buddhism, Confucianism, Daoism, Judaism, and Islam), but also a selection of biblical and theological responses to other religions. Surely, I thought, this book is going to be overly simplistic.

Yet I needn’t have feared. Cooper’s overviews of the other religions are consistently insightful, and his descriptions of different Christian theologies of religions (“Inclusivism,” “Exclusivism,” “Pluralism,” “Universalism,” and “Particularism”), though brief, are very fair, quoting key proponents, including Rahner and Hick, and drawing out crucial distinctions, such as between “special” and “general” revelation.

Perhaps what I appreciate most about Cooper’s book is its sense of “balance” manifest in several ways. First, Cooper’s summaries of each religion keep in view both the “woods” and the “trees.” In his chapter on Hinduism, Cooper helpfully orients the reader to “perhaps the most diverse of all the major religions” (p. 15) by outlining Hinduism’s historical emergence and its nine core beliefs before then explaining how these beliefs find varied expression in the main schools of Hindu worship today. Second, along with illustrating major points in each chapter using the primary texts of the world’s main religions—with which he demonstrates an impressive familiarity—Cooper’s considerable practical experience interacting with religious adherents in real life also is evident, such that his analyses are informed both by academic and by practical observations. Third, Cooper’s breadth of knowledge enables him to draw parallels between the different religions; yet his depth of knowledge guards against superficiality, as he carefully sets out each religious system on its own terms, rather than measured against a grid of specifically “Christian” criteria. Finally, while sometimes technical, his material is quite fun to read! Cooper dedicates his book to “the countless individuals who have sat attentively in classes and churches as I discussed Christianity and world religions” (p. v). No doubt partly due to those years of classroom experience, the reader now benefits from an accessible reading style supported by attractive charts, diagrams, colour photos, and even an appendix of “Projects, Essays, and Worldview Questions” to facilitate further study.

Descriptively, the book is excellent. My only quibbles are with the chapter on Islam. Cooper’s presentation of Islam’s origins seems overly sanitised and (apart from a brief footnote) lacking in awareness of the latest critical historical research (e.g., Dan Gibson, Qur’anic Geography and at a popular level Tom Holland, In the Shadow of the Sword). Also regrettably, Sufism is mentioned only briefly (as a research question in the appendix) and “folk Islam” not at all, perhaps reflecting Cooper’s greater interaction with Muslims in the USA instead of those in Islam’s traditional heartlands. Other than this, however, Cooper successfully delivers what his title promises: An Introduction to the World’s Major Faiths.

Prescriptively, the book is weaker. When mentioning Confucian ancestor worship (p. 72) and Hindu yoga (p. 176), Cooper offers no suggestions for how readers might begin to evaluate these controversial practices biblically. One of the book’s stated aims is to encourage Christians to visit non-Christian places of worship (p. 197), and to this end he provides “Appendix C: A Guide to Visiting Non-Christian Worship Spaces.” However, apart from a reminder to pray beforehand, this appendix reads like a secular tour guide and gives no advice about issues related to spiritual warfare.

The biggest disappointments are the “Point of Contact” sections which conclude the chapters on each religion. Cooper’s understanding of religions as whole systems leads him, rightly, to warn against the dangers of potentially syncretistic characterisations of Jesus, whether as, say, the impersonal Dao of Daoism (p. 74), or as just another “yoga” (way) in Hinduism (p. 22). After sounding these warnings, however, Cooper generally has little more to recommend positively. A notable exception comes in his chapter on Buddhism, in which he locates a “Point of Contact,” not within the other religion itself, but within our common human nature. He then argues that, where Buddhism here falls short, this innate human desire is truly fulfilled through the gospel. On page 48, he quotes Sadhu Singh:

Some say that desire is the root cause of all pain and sorrow. According to this philosophy, salvation consists in eliminating all desire, including any desire for eternal bliss or communion with God. But when someone is thirsty, do we tell him to kill his thirst instead of giving him water to drink?

Cooper then comments: “Jesus is the true living water. . . . Our desire for water, in other words, does not need to be overcome. Rather, our desire for water needs to be brought to completion . . . .” Analogous to the “subversive-fulfilment” approach advocated by Daniel Strange, this seems like the ideal approach to locating evangelistic “Points of Contact,” not only with Buddhists and Hindus, but with followers of all religions and of none.