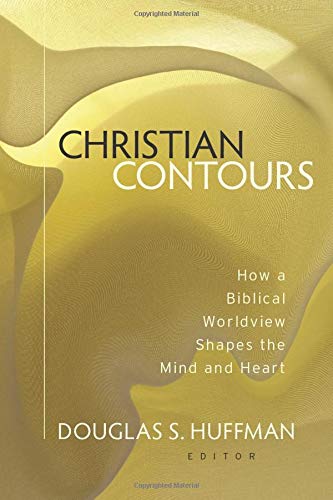 Christian Contours: How a Biblical Worldview Shapes the Mind and Heart

I have lived my life among students, teaching in many places to many people. And while I am not a pastor, there have been times when the pastoral thread in my vocation has been drawn out as I have worked as a professor. Years ago, for example, I was asked to preach on a “university Sunday” for a large Presbyterian church in a major academic center.

As I shook hands with the congregation as they left, one undergraduate stopped and said, “It sounds to me like you don't think I should have to choose between praying and thinking. Is that right?” And so for months he and I met at a bagel café for breakfasts, praying and thinking our way through his hope. His story is the story of Everyman and Everywoman, of everyone who wants to live a coherent life.

It is that vision that is the heart of the new book Christian Contours: How the Biblical Worldview Shapes the Mind and Heart. Huffman writes that the “grounding assumption of this book is that faith and thinking are not opposites” (p. 9). Drawing on a faculty of friends, he offers a collection of essays by serious people about a serious concern, namely, “to think about life as a whole and to strive to have a Bible-oriented view of everything” (p. 10). Amen and amen.

As I read I found myself thinking of scores of students and faculty I have known, in faith-centered institutions and secular-shaped ones as well. Having lived between these different kinds of schools for all of my life, I know that there is a divide that wounds the church and the world; that we misread their respective roles is tragic. Within what we call “Christian colleges” it is often difficult to imagine the concreteness and rigor of the questions of the pluralizing world. And on the other side, within what we know as public and private universities rooted in secularizing visions of life and learning, it is almost impossible to imagine alternative accounts of the universe, especially ones marked by transcendence and truth. Knowing this world of higher education as I do, I read the contributors and their essays, wondering each time, “So how would an eager freshman at Gordon/Geneva/Taylor/Wheaton/Biola read this?” Or “How would an earnest professor who wants to think and teach Christianly at the University of Virginia/University of Chicago/Boston University/Stanford read this?” Good questions for all of us, and for the writers, because it is in answering that question well where the value of a book like this is found.

In my reading of what we learn and how we learn, the word “primer” is a good one. It promises us a way in. By reading carefully and critically, we become trained to do more, to understand more completely, to form habits of heart that teach us to pray and think in ways that make sense of the world and of our place in it. This volume is a primer, introducing the reader to the contours of academic discipleship. From its first pages where the vision of “the whole of life” is set forth, a learning where mind and heart are twined together, on to its chapters focused on the particularities of worldviews in general and the plausibility of a Christian worldview especially, and finally its last chapters where everything anyone wanted to know about academic and professional resources are offered in great scope and detail, the book is intended for someone who wants to understand the foundations of faithful learning.

The authors draw upon most everyone who has written on this subject over the last half-century. From Richard Niebuhr's early contribution to the long life of James Sire's writings on through Arthur Holmes and David Naugle-and many more-each writer interacts with the best work over the years, standing on the shoulders of good people who have done good work. I confess that, sometimes, that seemed too much; I wanted more original reflection and less, “As so and so has said.” Not tragic, but I noticed.

Two questions. First, while there is a nod to the Middle Eastern character of the biblical worldview, the writing reflects a more Western and modern understanding of the ways we learn. While each writer offers a nuanced reading of his particular question, always attending to the dynamic of mind and heart together, the style is characteristically “modern” in the sense of a propositional statement of the issue and the way it is to be addressed. Perhaps that was the agreed-upon editorial style, and that is one way to learn. But there is little of “the first-century Palestinian” (to quote one of the writers) attention to stories that bring ideas to life, that give words flesh, and I wondered why. The longer I teach, the more sure I am that the Incarnation is not only creedally crucial, but pedagogically brilliant. We do not learn unless we see that words can become flesh. I found myself longing for a good story of the way these good ideas get worked out in life.

And second, there is an assumption of coherence throughout, which is exactly right. “[W]e live in a 'universe' (uni = one), not a 'multi-verse.' Only one reality is really real, and we should think about it in a properly integrated and honest way” (p. 20). Yes, and yes again-mostly. As a professor, so much of my deep hope is that my students will come to see that we get only one world to live in, and that is the world that God made. But a little poke too. If it is a universe, a cosmos, why not assume its coherence and therefore offer a vision of scholarship that sees life and learning as an integral whole-not something to be integrated? It is a matter of words and of what we mean by them; I will not die over the difference. If the problem is ours though, that we do not see truthfully-but only through a glass darkly-then our best praying and thinking ought to be toward the end that we will see things as they are to be seen, in their reality, the reality of the “one reality.” Integral, not integrated-there is a difference, and the difference matters, metaphysically and pedagogically.

There is much to commend in Christian Contours. For readers young and old who want to understand what it means to teach and to be taught in ways that are biblically rooted, the writers have offered a strong contribution to the growing resources available for thinking Christianly about everything and anything. That is a gift to all of us. Given who I am and whom I meet, my questions are always, “So how does this work out? Will it be persuasive?” One of the most important chapters is titled, “How Can I Live the Christian Worldview in a Culture That Does Not Share It?” The few paragraphs on the difference between virtues and values are almost priceless; to know why these are different can give life to the mind and the heart.

A last word: As I listened to these writers, I found myself thinking of a student who has recently come back into my life through the strange graces of social media. Watching his comments on life and the world, I can see that his ways of making sense have changed. No longer someone who asks and asks about the meaning of mere Christianity, he has drunk deeply of his pluralizing PhD studies at one of the world's most prestigious universities, and he resists the possibility of a proper confidence (to remember Newbigin's important image) about the faith he once believed to be true. In a thousand ways, he argues for a culture of whatever, with intellectual sophistication. What would he think of this book and its argument? Would the words find a way in? Would they have helped him as an undergraduate? As a graduate student? Would they have been ballast against the world, the flesh, and the devil, as he has met them over the last years?

Whether our pilgrimages take us to Desperate State University or to Such-and-Such Christian College, at the end of the day the question is the same: will you be able to take up your life, and live-especially so in the face of the complex challenges of a pluralizing, secularizing, globalizing world? Only if we learn to pray well and to think well. This volume is a good gift to all for whom that question becomes the vocation that threads through life and learning, mind and heart, for a little while or for the whole of life.