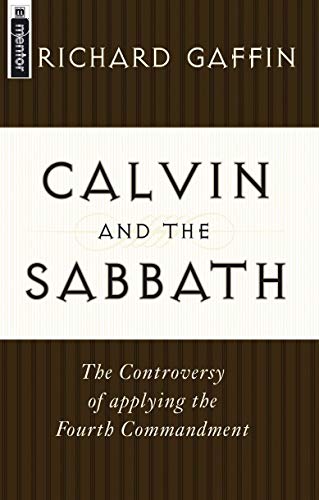 Calvin and the Sabbath

Calvin’s position on the sabbath is complex. It has long been recognised that there is a difference (in emphasis at least) between his teaching in the Institutes and in his exegetical writings. Richard Gaffin examines this teaching carefully, passage by passage, in two substantial chapters on ‘Theological and Confessional Writings’ and ‘Exegetical Writings and Sermons’. These chapters are sandwiched between brief chapters on ‘[Medieval] Background’ and ‘Other Reformers and Reformation Creeds’.

His exposition of the Institutes is very fair. He concludes that there is no significant difference between the (first) 1536 edition and the (definitive) 1559 edition. Calvin sees the primary purpose of the Sabbath as typifying our spiritual rest from works. This purpose comes to an end with the coming of Christ. The Sabbath commandment also provided a set day for public worship. This need remains, but which or how many days of the week is a matter of indifference. The Sabbath commandment also teaches the duty of employers to give their employees time of rest.

Given his own views, Gaffin is very fair in setting out Calvin’s position. I do, however, have three minor quibbles. First, Gaffin fails to draw attention to what, for me, is one of the most remarkable elements of Calvin’s teaching. In the Institutes Calvin never makes mention of any obligation today oneself to rest from employment—only the need to provide rest for one’s employees. This is a remarkable omission and shows just how far Calvin was removed from later Reformed sabbatarianism.

Secondly, Gaffin highlights Calvin’s general statements about the moral law and deduces from these that ‘the commandment, as an element of the Decalogue, applies to all people in every age’ (45–47). But this is not so much to argue from the general to the particular as from the general in defiance of the particular. Calvin explicitly states that the fourth commandment is different from the others in this respect (2:8:28). Gaffin’s case assumes an identity between the moral law and the Ten Commandments, which Calvin never states. Even if he had stated it in general terms, he makes it quite clear in his exposition of the fourth commandment that parts of it at least do not belong to the moral law. Gaffin argues from Calvin’s teaching about the eternity of God’s moral law, while Calvin explicitly states the fourth commandment is at least in part a typical ceremony that has been abolished (2:8:28, 31). This clear teaching cannot be neutralised by appeal to general statements about the moral law, which Calvin explicitly states not to apply in this instance. Calvin, following the New Testament writers, did not make the mistake of simply identifying the Ten Commandments and the moral law.

Finally, in 2:8:34 Calvin rejects the view that the moral part of the commandment is the fixing of one day in seven, while the ceremonial part (which particular day) has been changed. Gaffin objects to the idea that these words contain ‘a condemnation of the view later set forth, for instance, in the Westminster Confession of Faith’ (43). On what grounds does he object? Because Calvin was opposing medieval teaching at this point. No one in their right mind would claim that Calvin had the Westminster Confession in mind when he wrote, but that the view which he condemns was later espoused by the Westminster Confession is not so easily dismissed.

The final chapter begins with a summary of Calvin’s position in the form of nineteen propositions. Apart from the first two, which claim that the Sabbath is part of God’s eternal moral law, these are fair. There then follows an evaluation of Calvin’s position in which the author presents his own view of the Lord’s day as the weekly Sabbath. This is built upon his view of the Sabbath as a creation ordinance, an idea which Calvin did not take sufficiently seriously, he feels.

Gaffin is to be commended for his careful exposition of Calvin and for his taking care to distinguish clearly between Calvin’s view and his own. In my opinion it is the former that is more faithful to the teaching of the New Testament.