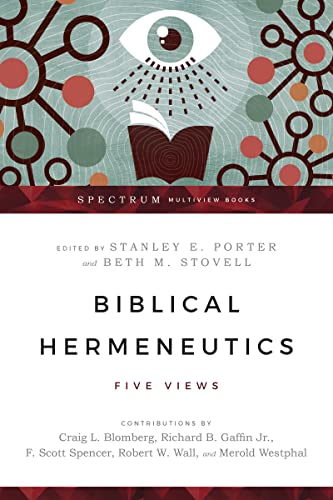 Evangelical publishers are releasing “multi-view” volumes with stunning rapidity. Such rapidity, in fact, that jaded readers may find themselves asking, “why one more?” They will be delighted to discover that Stan Porter and Beth Stovell's contribution to this genre admirably justifies its existence, helpfully framing and fostering hermeneutical discussions in ways that will promote constructive reflection within both the church and the academy.

The editors' introduction clarifies that this work, unlike many overviews of the science of biblical interpretation, does not focus “on procedure, history, or even the perspective of a single viewpoint or author” (p. 11). Even so, they are not historically unaware and venture a “brief history” of biblical interpretation along three lines-approaches that are “behind the text,” “in the text,” and “in front of the text” (pp. 12-16). The editors conclude their chapter by introducing the five approaches represented in this volume. Craig Blomberg advocates a “conservative” or “maximalist” version of the “historical-critical/grammatical” view. Scott Spencer represents a “literary/postmodern view.” Richard B. Gaffin Jr. articulates a “redemptive-historical view” in the tradition of Geerhardus Vos. Robert Wall offers a canonical-critical approach to the Scripture. Finally, Merold Westphal presents what the editors call “the philosophical/theological approach.”

The format of the volume is conducive not only to the exposition of each view, but also to the mutual engagement one expects in multi-view volumes. In Part One, each author presents his view and then applies it to a biblical text that is hermeneutically both challenging and rich-Matt 2:7-15. In Part Two, each author is given a single chapter in which to respond to the other four positions. The editors provide a concluding summary chapter.

Space precludes an exhaustive summary of the presentation of, much less interaction among, these five views. Focusing upon Gaffin's exposition of a “redemptive historical” view and the other contributors' responses to that exposition provides a representative sampling of the important issues raised in this book. Outlining six principles that inform Vossian redemptive-historical interpretation, Gaffin exposits Heb 1:1-4 in order to demonstrate those principles' biblical warrant (pp. 91-93, 94-97). He grounds his approach upon the identification of Scripture with divine revelation (p. 93). His interpretative principles seek to honor the principle that Scripture interprets Scripture and that Scripture evidences an organic and redemptive-historical unity (p. 97). Since contemporary believers find themselves in precisely the same redemptive-historical position as the NT writers, Gaffin reasons, our interpretative posture must be one of fundamental continuity with them (pp. 97-8).

Some of the criticisms raise questions about Gaffin's understanding of the relationship among the biblical writers. While expressing sympathy for Gaffin's general outlook, Blomberg claims that Gaffin illegitimately “use[s] . . . later text[s] to interpret . . . earlier one[s]” and fails to let earlier texts speak for themselves (p. 141; cf. Spencer's remarks at p. 154). Wall distinguishes his canonical approach from that of Gaffin, whom he argues fails to recognize that “the New Testament interpretation of Old Testament texts sometimes rewrites them or alters their communicative intention” (p. 197).

Other criticisms concern the way Gaffin understands the relationship between the biblical text and the reader. Westphal argues that Gaffin's claim of interpretive continuity between the NT authors and contemporary readers must be set in “tension” with the “historical-cultural-linguistic diversity” among them as well (p. 166). He further argues that Gaffin has not given “the finitude of our perspectives on the totality of God's redemptive and revealing activity” their due (p. 168). Spencer believes that Gaffin's insistence upon a specifically redemptive unity to the Scripture has the effect of muting or dismissing the “wide variety of questions and concerns that readers bring to the interpretative process” (p. 154).

As Gaffin himself acknowledges, this interchange highlights the way in which one's understanding of the nature, authority, and purpose of the Scripture is not inconsequential for one's principles of interpreting the Scripture (p. 177). The doctrine of Scripture surfaces in important ways elsewhere in this volume. For example, what particularly distinguishes the redemptive-historical from the canonical-critical approaches in this volume is that the former understands Scripture to be divine revelation and the latter understands Scripture to be a witness to divine revelation (pp. 112-14, 182-83, 197-98). Further, Blomberg and Gaffin disagree about the manner in and degree to which evangelicals committed to inerrancy may appropriate the historical-critical method in their interpretation (pp. 36-37, 178-82).

While one appreciates the editors' efforts to construct a “constructive hermeneutical analysis and synthesis” of the five views represented in the book (p. 202), the five views likely prove too diverse to admit of a hermeneutically practicable synthesis. This diversity is attributable, in no small measure, to differences among the contributors concerning the doctrine of Scripture and its implications for the interpretation of the Bible. In setting these views side by side and in conversation with one another, the editors have done their readership a great service. A careful reading of Biblical Hermeneutics: Five Views can assist readers of Scripture in reflecting with greater precision and self-awareness in doing what they already do-interpret the Bible.