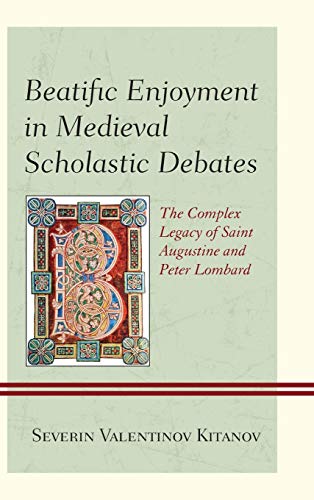 The doctrine of the beatific vision became a hallmark feature of medieval theology. One of the more curious features of the debates surrounding this doctrine is the focus on anthropology. As the discussion developed, one might argue that the actual doctrine of the beatific vision was choked out by an over-inflation of anthropology and ethics. Rather than focus on the beatific vision as such, debates focused the conversation elsewhere, sparring over the seat of enjoyment (intellect or will) and the various implications of those decisions. Kitanov takes this narrative a step further by tracing these debates through various commentaries on Peter Lombard’s Sentences. This focus is not arbitrary. Kitanov argues that Augustine introduced the notion of beatific enjoyment into theology, and builds on this to argue that Augustine’s distinction between enjoyment and use is his primary gift to the medieval discussion. The reason this distinction becomes so prominent is because of Lombard’s appropriation of it in his Sentences, and the primacy of his text propagated this distinction far and wide in medieval disputation. The commentaries on the Sentences served to establish the distinction between enjoyment and use as fundamental to the notion of the beatific vision. This not only helped to guide a certain understanding of eternity, but more importantly, oriented the discussion around anthropology, as theologians attempted to describe what it meant to enjoy and desire.

In his De Doctrina Christiana, Augustine develops his distinction between enjoyment and use. Kitanov notes that the enjoyment/use distinction connects Augustine’s ontology with his ethics, such that it addresses how the human person can subjectively relate to the objective order of reality. This connection with ethics will be carried through into the medieval debates. To enjoy or use something appropriately is to relate to reality as it was meant to be related to. Only God is meant to be enjoyed and not used. The problem is that fallen persons enjoy God’s creation and seek to use God to fulfill themselves. This is not to say that there is not enjoyment in God’s creation, or that all enjoyment that is not aimed solely at God is somehow idolatrous. Rather, it is within our enjoyment of God that we can enjoy ourselves, others and God’s world. It is only as we come to know and love things according to God’s own purpose and design that we come to enjoy properly. This distinction created the contours for medieval debate. How one enjoys God, what it means to enjoy something, as well as the nature and contingency of this enjoyment, become key points of debate. Lombard, therefore, baptized this distinction for medieval theology by giving prominence to the distinction for his Sentences. By organizing his Sentences according to Augustine’s distinction, he made it one of the most important distinctions for medieval theology.

In order to address the various debates and issues that arise with this distinction, Kitanov works his way through medieval commentaries on Lombard’s Sentences. This can be, at times, tedious, but his thoroughgoing narration of the debates bears fruit in several key areas, showing a broad knowledge of the major questions at play. Kitanov starts with Augustine and then turns to Lombard’s appropriation of his work. Turning to the commentaries, he sets up the issues of the debate with a broad canvassing of the thirteenth-century discussion. The remainder of the volume sits in the early fourteenth-century, meandering through the object and psychology of beatific enjoyment, enjoyment of the Holy Trinity, and the potential contingency of beatific enjoyment. Kitanov concludes with a look at the late Middle Ages, showing how some of these debates play out in later literature, and offers a summary of his work.

Overall, Kitanov does an excellent job of addressing the major issues and players in the debates. His method of rolling through sources can be hard on the reader, making this volume best suited for historical theologians with a particular interest in either this topic or time period, but it would also serve as a helpful resource for researchers looking into related topics (freedom, eschatology, sanctification, etc.). The cost and depth of the volume will make it difficult to use in classroom settings, but for upper-divisional graduate research and scholars, Kitanov’s work will prove to be an incredibly helpful resource.