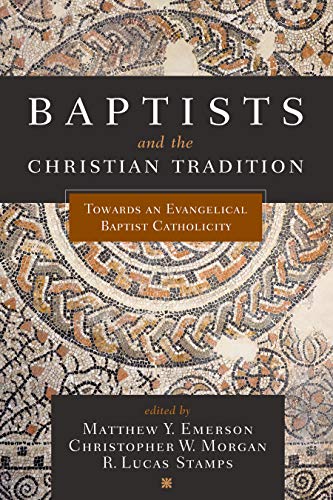 Baptists and the Christian Tradition: Towards an Evangelical Baptist Catholicity

In 1974 W. A. Criswell, then already two-time president of the Southern Baptist Convention, began a Wednesday night teaching series at First Baptist Church of Dallas on ancient Christian creeds and confessions. In a laudable moment of honesty, Criswell declared, “This is the first time that I have ever studied such a thing as this.” Amy Carter Whitefield, relaying this fascinating story, calls Criswell “typical” among Southern Baptists of his day in his general lack of engagement with the Christian tradition (pp. 249–50). Recognizing this legacy, the editors of the present volume hope to offer a way forward.

Specifically, the work aims at “retrieval for the sake of renewal” (p. 351) and seeks to show that “Baptist convictions and catholic sensibilities are not mutually exclusive” (p. 3). It should perhaps be noted here that the book’s title could be slightly misleading. The work, while noting a range of Baptist history, frequently focuses on Southern Baptists and the Christian tradition, with virtually every contributor somehow associated with the Southern Baptist Convention. With this in mind, after a foreword by Timothy George and a brief introduction by the editors, sixteen chapters cover how Baptists have either engaged (or failed to engage) the broader Christian tradition on a range of issues.

Rather than making a foolhardy attempt to summarize each chapter, I will take the reviewer’s privilege to highlight some of what I found to be the strongest chapters before noting a few weaknesses. Haykin, a leading Baptist historian and scholar, unsurprisingly offers perhaps the most well-researched contribution. He ably demonstrates how early seventeenth-century Baptists did not generally hold memorialist views of the Lord’s Supper but rather embraced the notion of a spiritual presence usually associated with Calvin and the Reformed tradition. The memorialist view only came to dominate Particular Baptist circles in the late eighteenth century as Baptists became highly focused on missionary endeavors and saw less use for non-converting ordinances.

Malcolm Yarnell III provides a fascinating survey of Baptist creeds and confessions and the extent to which they used classic Trinitarian language of ontology (e.g., essence, substance) and relationality (e.g., persons). His chapter, along with Putnam’s on scripture, should at least give pause to any inclined toward a “no creed but the Bible” approach. Amy Carter Whitfield and Walter Strickland II, in their contributions, commendably take postures of lament for the less-than-savory aspects of Southern Baptist history. For her part, Whitfield notes ways in which twentieth-century Southern Baptists have had isolationist tendencies that have at times led to thinly veiled feelings of superiority relative to other denominations and traditions. Strickland, in turn, narrates the racist history of the SBC before providing a series of suggestions for how to move toward racial unity. In a particularly engaging moment, he writes, “In America, the struggle for racial reconciliation is a premier litmus test for spiritual maturity” (p. 324).

Yet several weaknesses also recur throughout the volume. First, in contrast to Whitfield and Strickland, some chapters strike a tone that, at times, borders on triumphalism, uncritically noting only Baptist strengths. Further, although the book’s arguments frequently rely upon particular reconstructions of Baptist history, few of the contributors are historians, and the sources cited are often survey-level textbooks. It might also be asked whether labeling many doctrinal loci as “classic” at times omits the real diversity inherent in the Christian tradition. For example, Schreiner’s call to read the Bible “like Jesus, his disciples, and even the early church” (p. 151) commendably calls us to engage pre-critical exegesis. But Schreiner does not address the diverse exegesis of the early church and leaves unanswered the difficult questions of whom we ought to imitate, and how. There are no easy answers to such questions. Finally, the work includes an Appendix by moderate Baptist theologian Steven Harmon that could have been a fascinating rejoinder to the book’s more evangelical proposals. Unfortunately, Harmon does not interact with any of the chapters and instead writes what could have been a standalone piece unattached to the present book.

In 1974, W. A. Criswell’s cursory engagement with the Christian tradition was perhaps all too typical among Southern Baptists. Today, the winds are changing, and more Baptists, as evidenced by this volume, are interested in retrieving past resources for the sake of renewing present ecclesial vitality. This book deserves to be commended as a preliminary venture in this direction. Yet a number of its contributions themselves display a notable lack of nuanced historical engagement with the church’s pluriform past. The work thereby inadvertently points to the pressing need Baptists still have to truly engage on a deep level with the entire catholic history of Christ’s church.