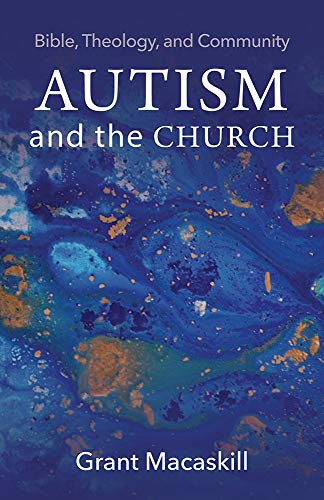 Autism and the Church: Bible, Theology, and Community

This book by Grant Macaskill, Kirby Laing Chair of New Testament Exegesis at the University of Aberdeen and co-director of the Centre for Autism and Theology (CAT), is among several critical works published in the last two years to explore autism, theology and Church practice. Macaskill aims to help Christians “think biblically” (p. 2) about autism in light of the Bible’s normative role for most Christians, and he shows how to do so when autism itself is not mentioned and does not appear to be known by the biblical writers.

Because of the newness of this field, Macaskill notes that there currently exists a lacuna between the technical, scholarly literature on autism and autistic people and their families, clinicians, and congregations generally. He writes primarily to fill this need, endeavoring to “minimise the barriers between such individuals and the research itself, without sacrificing necessary technical depth” (pp. 3–4). To help reach his intended readership, Macaskill doesn’t assume any knowledge of the biblical languages—which he transliterates when necessary—and any technical discussion of the secondary literature is relegated to the endnotes leaving the main text uncluttered.

In his introduction, Macaskill discusses potential misunderstandings and misconceptions that the reader unfamiliar with autism may have. These include the stereotype that autistic people “lack empathy” or are “incapable of understanding ‘non-literal language’” (p. 7). Macaskill also addresses concerns that an autistic reader—or someone who has experience of autism—may have. These include the problem of universalizing one’s experience as normative for everyone (a truism repeated widely is that if you meet one autistic person, then you have only met one autistic person), and whether to use person-first (“a person with autism”) or identity-first (“an autistic person”) language.

In chapter 1, Macaskill summarizes the current medical understanding of autism, particularly its causes and common characteristics. Influenced by disability studies, Macaskill defines autism as a “condition” and argues for autism as a difference rather than a negation. In one helpful section, Macaskill grounds the somewhat abstract understanding of autism within this chapter by relating the characteristics of autism to examples of autistic people’s church experiences (pp. 26–31). In this reviewer’s opinion, this chapter could easily be spun off and edited into a stand-alone introductory booklet.

In chapter two, Macaskill sets out the general interpretative principles he will employ in the following chapters. Readers of this journal may want to challenge or nuance differently some of Macaskill’s points; for example, his claim that the biblical texts reflect the historical prejudices of their day (pp. 60–62) and who precisely he is critiquing when he references “Evangelicals.” Yet, in the broad strokes, there is much to affirm.

In chapters 3 and 4, Macaskill develops one of the interpretative principles from the previous chapter: participation or “being in Christ.” Here he builds upon his research in an earlier book—Living in Union with Christ: Paul’s Gospel and Christian Moral Identity (Grand Rapids: Baker Academic, 2019)—exploring in detail passages from Matthew’s Gospel and 1 Corinthians, the motifs of the imago Dei, the flesh versus the Spirit, weakness and strength, and the metaphor of the church as the body. As one would expect from an accomplished New Testament scholar, Macaskill’s exegesis is clear and nuanced, reflecting his love for Scripture. But he also has a comprehensive and sophisticated grasp of the theological unity of the Bible, enabling him to draw together disparate threads into a cohesive argument. His plea for understanding the sensory difficulties many autistic people have within a church service and the need to moderate or rethink our practices in light of these theological principles is especially challenging.

In chapter 5, Macaskill highlights some of the significant challenges that autism brings; in particular, poor mental health and addiction are more prevalent and present differently in autistic people. The reasons for this are complex and cannot be summarized here, but Macaskill handles these issues deftly and sympathetically. Building upon a point made in his previous chapters, Macaskill states that autistic people are also required to be discipled and have their sinful attitudes and behaviors challenged. But pastors with autistic people in their congregations must carefully consider how autism intersects with these other pastoral issues and how best to support these congregants and their families.

In chapter 6, Macaskill examines four pastoral issues in depth. These are: (1) the inability of profoundly autistic people to verbalize (publicly) a profession of faith; (2) the difficulty with prayer—especially extempore prayer; and (3) how autistic people interpret the Bible, particularly in light of two common characteristics of autism, the preference for precise language and systematization. Macaskill’s suggestions for addressing these within the church will enable busy pastors to reflect on how they may best apply them within their context. The last issue—that a high percentage of autistic people also identify as LGBTQ+—may come as a surprise to many readers and adds another challenge to an already complex pastoral condition. While Macaskill declines to pronounce on the moral questions this raises, his plea for a loving, proportional response to autistic people is well taken.

Finally, in his conclusion, Macaskill draws together some of the main points he has made throughout his book, particularly the themes of weakness and gift, providence and creation, the importance of community, and leadership. His final point on the supremacy of our identity in Christ over any other identity stands in stark contrast with contemporary identity politics, and to which this reviewer can utter a heartfelt “Amen”!

Overall, Macaskill fulfils his aim to write a scoping work. He writes clearly, summarizing complex ideas succinctly, and explains terms—for example, “neuro-typical” and “stimming”—that may not be familiar to the reader. The highlight is his exegesis and theological sensitivity, coupled with a pastoral heart for autistic people to belong fully within the people of God. In addition, Macaskill’s robust ecclesiology and acute insights into the implications for what it means for every Christian’s identity to be in Christ will reward careful reading and apply to numerous contexts, not just autism.

Despite the book’s clarity, this reviewer believes that some theological education is required, at least at a diploma level, to follow Macaskill’s arguments fully. This caveat, coupled with the price tag—which, although inexpensive for a university press publication, would make a casual reader think twice—calls into question how many of his book’s intended audience would read it. To be clear, this is not a criticism of Macaskill’s work, which deserves to be disseminated as widely as possible. However, it may be other mediums—podcasts, video, blog posts—will enable more people to engage with this book’s content.

I raise this issue as it would be a great pity if the reach of Macaskill’s research was limited, for Church leaders, those with responsibility for pastoral care and those interested in theology and autism will profit significantly from reading and reflecting on his arguments. Therefore, the onus is on publishers to think more creatively about better engaging the audiences they want to reach with their releases.