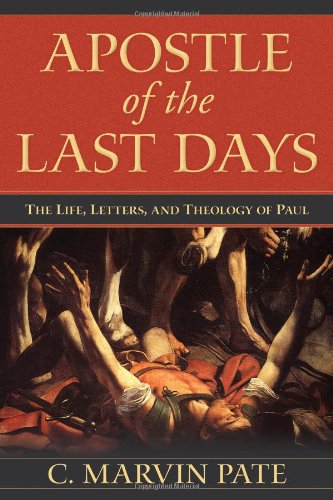 Apostle of the Last Days: The Life, Letters, and Theology of Paul

Paul’s letters cover a remarkable variety of situations and topics. Interpreters have frequently sought a key to Paul’s theology which could enable us to make sense of the various details in light of a fundamental core. C. Marvin Pate, professor of Christian theology at Ouachita Baptist University, argues that such a “center” or hermeneutical key is found in Paul’s apocalyptic inaugurated eschatology. In his earlier work, The End of the Age Has Come (Grand Rapids: Zondervan, 1995), Pate explored the eschatological structure of Pauline theology according to various themes. In Apostle of the Last Days, Pate applies the same basic framework to each individual Pauline letter (Pate accepts the Pauline authorship of the 13 canonical letters).

In his introduction, Pate categorizes the various eschatologies in Paul’s milieu according to a three-part schema. (1) Consistent eschatology, a common view in Judaism, saw the kingdom of God as an entirely future reality. (2) Realised eschatology, the view of Hellenistic-syncretistic religion, the Roman imperial cult, and “Merkabah” or visionary Judaizers, saw the age to come as fully available now. (3) Inaugurated eschatology saw the kingdom as having begun and being available now but awaiting a final consummation (“now but not yet”). This is the view of Paul and non-Merkabah Judaizers, the difference between them being their view of the place of the law vis-à-vis faith in receiving the kingdom. Pate’s thesis is that “the conflicts Paul encountered in the cities of the churches he founded and wrote to erupted as he presented his apocalypse of Christ in the face of the various eschatologies delineated above” (p. 26).

In chapter 1, Pate argues that Paul’s conversion, call and message, as described in Gal 1, Rom 1 and Acts, were all driven by an apocalyptic inaugurated eschatology. Paul’s apocalyptic message had four key components: Jesus is the Messiah; his death and resurrection inaugurated the new age; salvation is entered into by faith (not obedience to the law); and the Gentiles are called to salvation.

Pate then examines each of the letters of Paul in turn, comparing with Acts and engaging with scholarly discussions along the way. Chapter 2 discusses the eschatologically driven character of Galatians. Paul argues primarily against non-Merkabah Judaizers (with the imperial cult also in the background). He insists that because the new age has dawned in Christ, the law of Moses has completed its divine purpose and justification is now available through faith in Christ, not the law.

1 and 2 Corinthians are driven by the conflict between Paul’s inaugurated eschatology and the realized eschatologies of Hellenistic-syncretistic religion and Merkabah Judaizers (chs. 4–5). Paul reminds his readers that the new age and the resurrection is not yet fully realized; it is only available now through the cross of Christ. Thus, for example, suffering is still a normal part of Christian experience, and believers must still resist the temptation to commit immorality.

The letter to the Philippians is a challenge to live in the overlap of the ages by embracing Christ-like living and suffering and to look forward to the new age (ch. 7). This challenge is issued in the face of the realized eschatology of Merkabah Judaizers and the Roman imperial cult.

In the face of Merkabah Judaizers who insisted that obedience to the law of Moses brings about a mystical experience of the age to come, reinforced by Hellenistic religion and the Imperial cult, Paul insists in Colossians that Christians are fully caught up to the throne of God through Christ (ch. 8). In Philemon eschatological thinking is implicit (ch. 9). The dawning of the new age in Christ has relativized socio-economic status, which allows Paul to call for the release of a slave.

Ephesians espouses an inaugurated eschatology to strengthen the church in the face of Hellenistic religion and the Roman imperial cult (ch, 10). The struggle against God’s heavenly enemies is not complete, and so Christians are also involved in a spiritual battle. Nevertheless Christians have already received many spiritual blessings and can be confident in God’s ultimate victory.

Chapter 11 argues that the Pastoral Epistles presuppose an inaugurated eschatology and are written against various other, mostly realized, eschatologies (including a Philonic form). The Pastorals do not capitulate to the surrounding Greco-Roman ethic as many scholars claim, but rather issue a call to live rightly in the overlap of the ages and to endure messianic sufferings while awaiting Christ’s return.

Chapter 12 summarises Paul’s theology as a whole. God is viewed primarily in apocalyptic terms as the one who will judge the world and bring about the coming age, and is already active in doing so. Other theological themes in Paul’s letters should also be understood as primarily eschatological: Christology, pneumatology, anthropology, soteriology, ecclesiology and of course eschatology itself.

Pate has successfully demonstrated that eschatology is vitally important for reading Paul’s letters and understanding his theology, and has produced a broadly persuasive conservative evangelical reading of each of the thirteen Pauline epistles using his eschatological framework. I particularly appreciated Pate’s discussion of the often unacknowledged and unexplored similarities and connections between eschatological themes in the undisputed and disputed Pauline epistles.

Pate’s claim that eschatology is the “center” of Paul’s theology, however, seems to be an over-reach. The person of Christ, for example, is often portrayed simply as the agent or instrument of Paul’s eschatological agenda, rather than as the Lord to be known and loved in his own right. The claim that eschatology is the “center” also leads to some unresolved questions. For example, according to Pate, the primary difference between Paul’s framework and the non-Merkabah Judaizers’ framework is not strictly eschatological at all; rather it involves the respective roles of the law of Moses and justification by faith within otherwise closely related eschatological frameworks. Perhaps the statement which Pate makes on page 14 (but does not emphasise) more accurately summarises the situation: “justification by faith, wedded with eschatology” is the “substructure of Paul’s letters” (cf. Käsemann).

There are a few minor quibbles: some overly-generalised statements about scholarship (e.g., “most Pauline scholars today believe . . .”, p. 16); Bible references which did not appear to back up the statements being made (e.g., using Rom 1:16–17 and 5:12–21 as examples of the position of the Judaizers, p. 169); and numerous signs of hasty and/or incomplete editing (e.g., repetition of slabs of text such as on pp. 31–34).

These reservations aside, Pate has provided a thorough, rich, and detailed exploration of the eschatological themes in Paul’s letters. With its wealth of material, the book would be valuable as a mini-reference work to be consulted for eschatological themes as part of preparation for reading or teaching any of the thirteen Pauline epistles.